You are not connected. Please login or register
Go to page : 1, 2

Here is a place to list all of the games you finish this year!  Last year's listing is here: Games Finished in 2018

For anyone who wishes to participate, just say "I'm in" and edit that post with your games as you finish them.  I'll put a link to each person's list in this post for easy access.

I'm in again! and here's my first one:

I've finished a couple, but have been pretty slow so far (compared to the end of 2018, anyway!)

It was fun, only wish it had lasted longer. Very good story, especially since I enjoy MMA and such.
TheCloser17

Shadowhand is finished now, and as soon as I can motivate myself to do so, I'll write a review.  Just haven't been able to concentrate enough to write lately!
_________________
Never be a prisoner of your past.
It was just a lesson, not a life sentence.

genkicoll wrote:Shadowhand is finished now, and as soon as I can motivate myself to do so, I'll write a review.  Just haven't been able to concentrate enough to write lately!

Congrats on completing that! Was a very fun game for me. We are reversed in our motivations right now. I've not been playing much this week really and been writing more reviews lately lol
TheCloser17

Phew~!  Finished the review for Shadowhand at last!  That one took a while, and I didn't even mention everything going on in the game!
_________________
Never be a prisoner of your past.
It was just a lesson, not a life sentence.

It was so short it wasn't very painful, especially when I turned the music off lol
TheCloser17

This is an entertaining puzzle game that has some horror and humor in it. The cartoon graphics are a great fit for the horror/humor mix. Although, the game does have some blood and violence in it, it does lean towards the cartoonish type of blood and violence. There is an option to shut off the blood animations though. The object of the game is to make Jason's  way though each board/map by getting the finishing touches on your victims and to avoid doing damage to yourself, which on some boards can be very easy.

The game is very forgiving for those that make mistakes while playing, you can go back any number of turns and even just reset the puzzle if necessary without having to leave the board you are playing. So a big plus for ease of use. You can also use a hint system as well. As you advance through the boards the game gets tougher and tougher, with props to use as well as individuals you are not supposed to kill or that can kill you as well.

The first eight episodes of the game are free, but there is a charge for the final four episodes. You can also buy different themed Jason characters as well from the store. There are also in game purchases for the items you can use as Jason's weapons in the game, the cost of these varies on how many weapons you wish to purchase, the highest cost crate is $9.99 US.

The achievements are not real hard to get, however there is a catch to collecting the weapons. I have played through the game and have also played the murder marathon mode for many hours and have been stuck getting the last item for quite awhile now. This may prevent me from completing the game 100%, as I did purchase 3 crates or so to try to get the last item but did not have the luck to get said item and it's not worth it to me to spend any more money on the game.

Overall I give the game an 8/10 for the challenging puzzles and I was very entertained playing the game.

Right now I'm working on two Match-3's (one for curator), an IHOG, a LEGO game, and beta-testing a new solitaire game for Subsoap!

genkicoll wrote:Right now I'm working on two Match-3's (one for curator), an IHOG, a LEGO game, and beta-testing a new solitaire game for Subsoap!

Very nice, I bet the beta testing is fun!
genkicoll

It is very nice to be able to help out, and it's cool to be involved in the development, as well.

Winter Solitaire makes my 11th game completed this year, although technically it's the 12th since I went through Faerie Solitaire Harvest twice

How are you doing, Tanya?

Doing ok. Just have slowed down on gaming lately. A lot of my time steam says I have played is really AFK time. Been busy doing stuff around the house a lot and have been leaving the games running LOL

Youngest isn't feeling well, so she's turned into a harpy.  Screaming and head-banging, and nothing makes her happy except going for car rides and being read to... Not even her iPad is helping right now, so we're totally frazzled!
_________________
Never be a prisoner of your past.
It was just a lesson, not a life sentence.

That makes 15 games for the year so far~!

genkicoll wrote:That makes 15 games for the year so far~!

I've slowed way down lately on playing, I have tons of afk time. Been busy trying to get through boxes of my parents belongings mostly. And some of ours too. Getting rid of a lot more than what we are keeping, thank goodness.
TheCloser17

genkicoll wrote:Youngest isn't feeling well, so she's turned into a harpy.  Screaming and head-banging, and nothing makes her happy except going for car rides and being read to... Not even her iPad is helping right now, so we're totally frazzled!

Hope your daughter is feeling better by now, it's rough when you are sick.
genkicoll

This is a colorful match-3 game with a lot going for it, but I'm going to have to give this game a negative rating due to the dev's decision to modify what seems to be a modified Pay-to-win that will eventually become unplayable.

We start with basic, swap-to-match-3 mechanics, with a new goal for each each level.  As you progress more and more types of gameplay are introduced, such as bringing items to the bottom of the screen, collecting gold hidden inside rocks, teleportation nodes, matching butterflies before they can fly away, etc.

You have a set number of moves per level.  If you have moves left when you reach the level's goal, it will throw bombs out onto the field, which will break more items and get you more $$.

You will gain a star for each level you complete, as well as gold (the amount varies depending on how many items you clear during the level.)

Stars are used to purchase decorations for the planet you are on.

Gold is a different matter.  If you don't complete your level-goal within the number of moves provided, you can continue by paying for 5 more moves.  Fail again?  Pay again (etc) until you finish.  You do have the option of starting over from scratch, and there will be no money out of pocket for that.

Money is also used for:

Here is where the game breaks.  Eventually you're going to HAVE to have power-ups and/or more moves in order to finish a level, and once you run out of money, that's it!  You cannot progress any further.

It's a shame that people aren't going to be able to complete the game, because it's such a vibrant and fun-to-play game.  If the devs will update this to give us SOME way to earn money - whether that be by allowing us to collect money as we play or giving it to us in real time - then I will change my rating to a positive.  As it stands, I'm afraid that I have to give this game a failing grade. 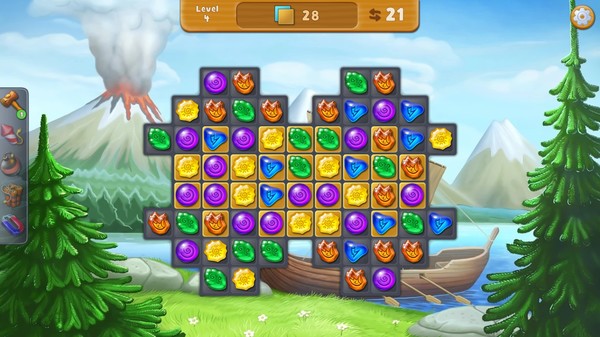