Fasten your seat belt and take off with Amber Hope in a new airline game!

From GameHouse, makers of Delicious, Fabulous and Heart’s Medicine, comes a brand new time management adventure that will make your heart soar!

In Amber’s Airline - High Hopes, you’ll get a taste of the glamorous life of a flight attendant.

Meet Amber Hope, aspiring stewardess for Snuggford Airlines. Amber has dreamed of flying to exotic destinations around the world since she was a girl. But before she can join the elite crew of air hostesses, she’ll need to pass her exams. That’s not going to be easy, and she’ll need your help.

Be transported by a truly wonderful story of love and loss

Master 18 mini games that cover every aspect of flying – from check-in to security checks, suitcases to passports, safety demonstrations to serving passengers

Amber’s life seems wonderful. She shares her apartment with her pet fish, Sushi. She loves her job and dreams of the day she’ll be on an airplane, a full-fledged cabin attendant assisting travellers. The possibilities are endless - “the sky is the limit” as they say. But appearances can be deceiving…

Everything is overshadowed by what happened in her childhood and she can’t escape her past. Her lingering guilt and fear are holding her back from achieving the very thing she is trying to achieve.

When her plane crashes, Amber is forced to face her fears. As you’ve heard time and again during safety demonstrations, Amber will have to help herself before she can help others. Is she up to the task?

Share the highs and lows of Amber’s life. Be there for her and help her ascend to the highest heights! 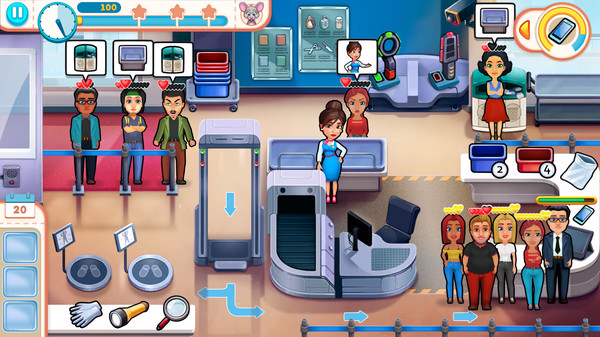 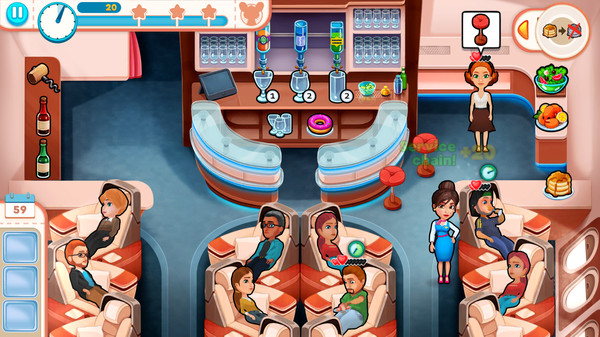 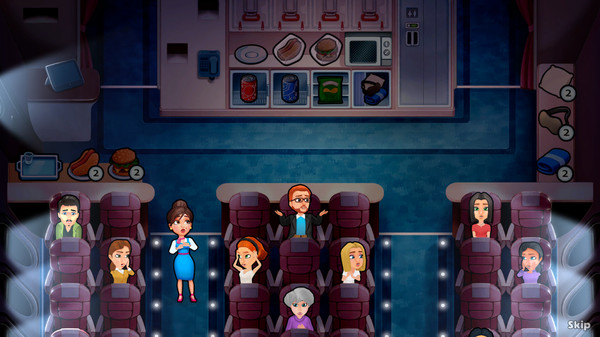 Options include separate sliders for Music, SFX and Quality, Tips on/off, and 17 Languages to choose from.  There is a "How to" section for new players, but no choice of difficulty.

Amber works the terminal at the airport, and dreams of being an airline attendant.  Traveling all over the world, meeting new people, making exciting memories... To do all of this she'll have to pass her exams and outshine the other applicants, but her past is dragging her down, and there is only one opening.  You'll have to help her overcome her fears when a crash landing puts her will to the test.  Will she be ready when it really matters, or will the trauma from her past keep her from succeeding? 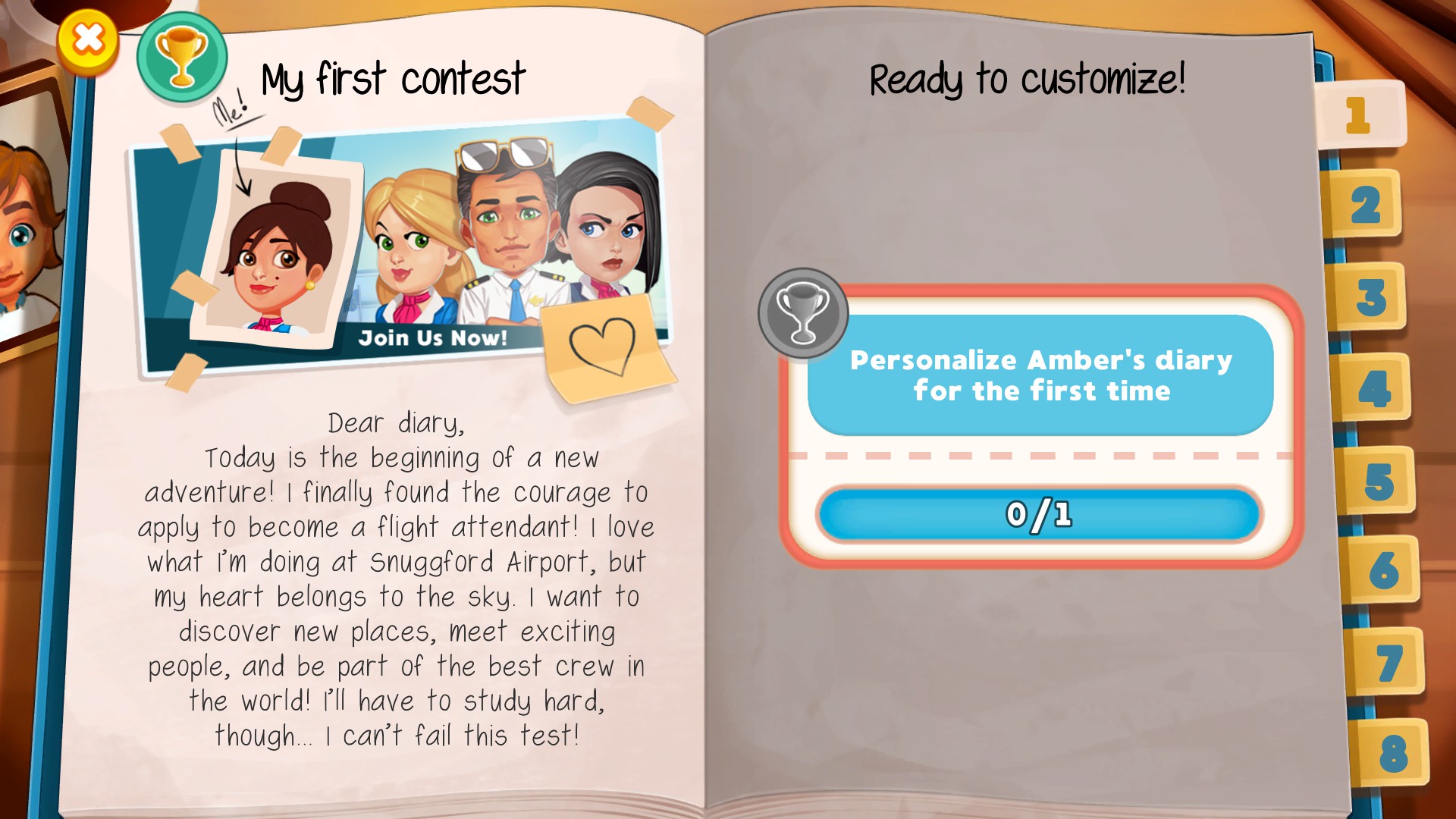 We have a Journal, of sorts.  Each time you earn an achievement, you'll unlock a new diary entry that adds a smidgen to the story.

The first two locations are good, although they'll be more interesting for people who love airports ;)  Once we get towards the end of the second location, the story really takes off, and I got engrossed in the tale.

I really love the GameHouse Original Stories series of games, and this one is no exception.  Amber's Airlines was Old Skull Games' first foray into Snuggford, and it has both its highs and lows.  Before I get to that, let me give you the basic gameplay.

This is a dash-style time management game, where your goal is to make as much money as possible before the day ends.  Doing so means making your customers happy, as indicated by the hearts over their heads.  More hearts = more money.

The game does a good job of teaching you the basics (if you choose to play the tutorial), but one thing they assume that you know is that people with gold stars will not lose any happiness!  You can leave them sitting at the register for as long as you want, and they'll stay 100% happy.  This is very important, because there's a bonus that increases for each customer you ring out in succession.

So how do you get gold stars?  I'm glad you asked!

The secret is to serve customers as quickly as possible.   On the plus side, you start out with three tray slots, but on the down side, that's your limit -- three.

There are 6 areas with 10 levels each, and the early levels for each location will only have a few items.  Use this to your advantage, and keep one or two items on your tray at all times for even quicker service.

The station-swapping mechanic gives you a nice point bonus, and although it's not possible very often, it's really a great addition to the dash-TM genre.

It's not all about taking things to people, though, there are also Mini-games that can pop up when you go to assist someone. Things like directing people where to go, getting them checked in, helping people get their seat belts adjusted properly, x-raying suitcases and more!  The quick-service meter above each customer's head pauses during pop-up mini-games, but not during the mini-actions such as the one pictured below: 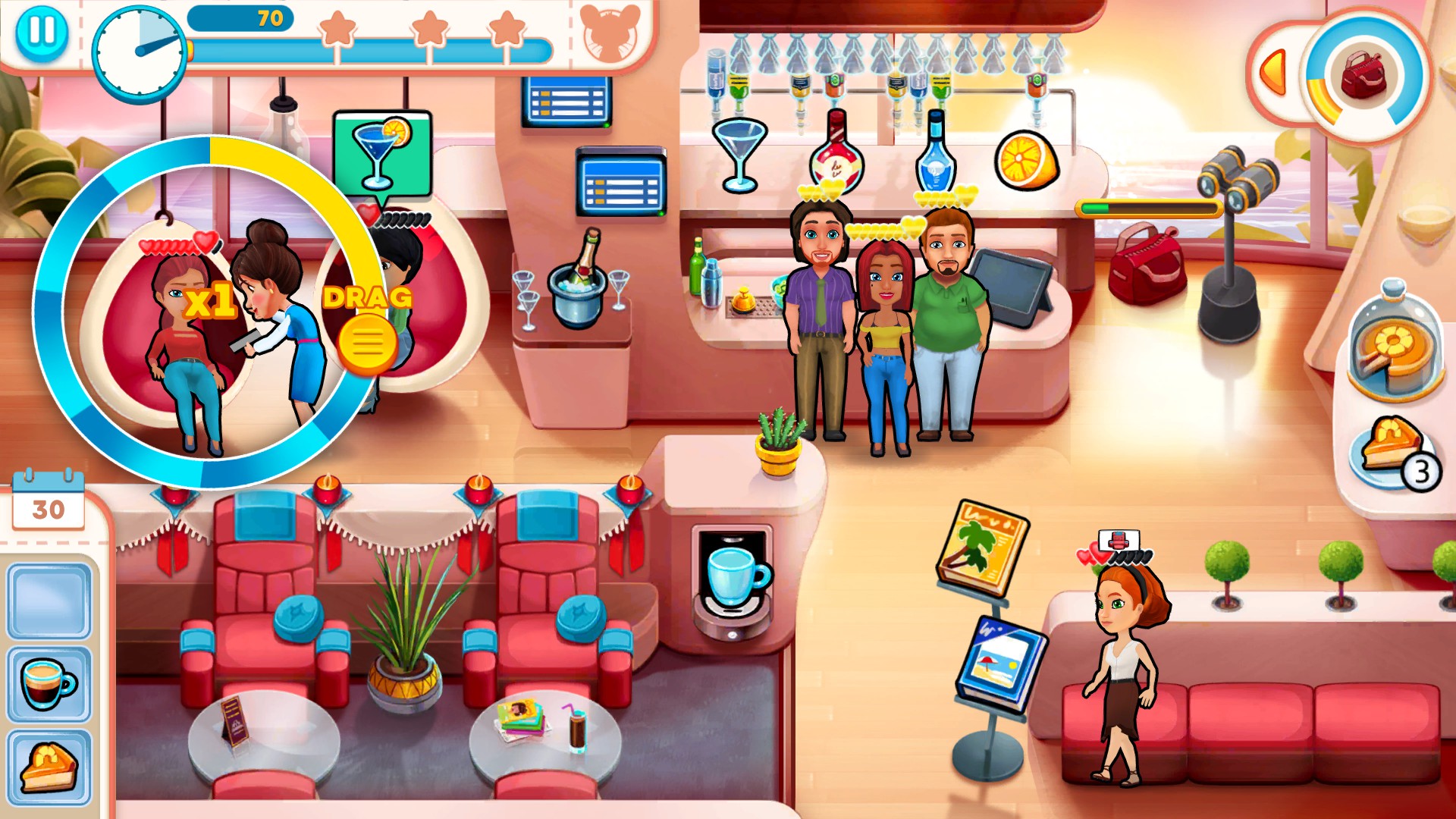 Stars, Gems and Mice, oh my!

The hearts that I mentioned above is how the scoring is done, but there are two other things that are being tracked on each level:

So what do we do with all of this money and gems that we're earning?  Buy upgrades, of course!

Each location has upgrades that will help you manage your customers more easily, so more money will make your job a little easier!

The gems are used to buy customizations for your diary.  Each "upgrade" has three design options, so you're not just stuck with one look.

You can earn additional gems by doing the bonus levels, which unlock every three to four story levels.  Instead of earning money you earn gems.  Carl will not appear on the bonus levels, except for the one that features him ;)

The Steam achievements are a welcome addition, and I have a few left to do, since I stopped playing the bonus chapters once things got interesting! lol~ 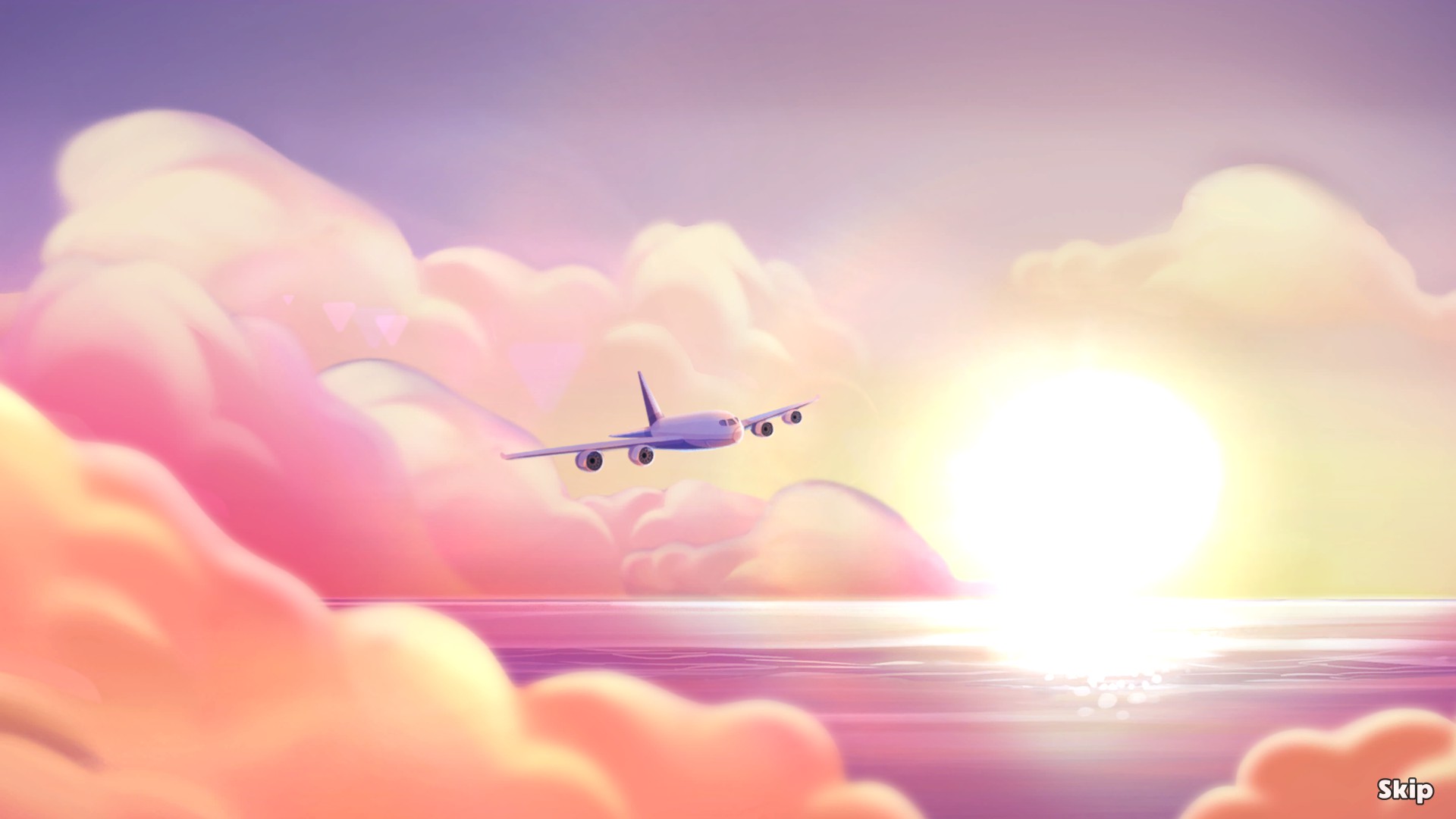 The graphics are very nice, and even stunningly beautiful at times.  I love the range of emotion that they've added to the characters' actions, and the cutscenes are very well-done.  There are no voice-overs, per usual, but the sound effects and background music are nicely-done.

I did mention that there are highs and lows, and the low would be the beginning of the game; specifically the very first level.  It's slow... and when I say slow, I mean excruciating slow.  I think it was a poor design choice to have a 2-minute level that has you doing almost nothing.  The early gameplay is pretty zen, but as the story perks up, so does the gameplay.  It never got super-hard, but it does require more skill as you progress.

My verdict is that this is a solid game that starts off slowly, and gets really interesting as you progress.  I think this will be especially fun for those who love airports and airplanes as well.  Good story, good gameplay, nice graphics and likeable characters come together to make a fun game for most of the family (there are nights out drinking, so maybe not for the little ones.)  I was happy with how they ended the game, both giving us closure and something to look forward to in the next installment. Recommended!
_________________
Never be a prisoner of your past.
It was just a lesson, not a life sentence.