Batman: Arkham City builds upon the intense, atmospheric foundation of Batman: Arkham Asylum, sending players flying through the expansive Arkham City - five times larger than the game world in Batman: Arkham Asylum - the new maximum security "home" for all of Gotham City's thugs, gangsters and insane criminal masterminds. Featuring an incredible Rogues Gallery of Gotham City's most dangerous criminals including Catwoman, The Joker, The Riddler, Two-Face, Harley Quinn, The Penguin, Mr. Freeze and many others, the game allows players to genuinely experience what it feels like to be The Dark Knight delivering justice on the streets of Gotham City. 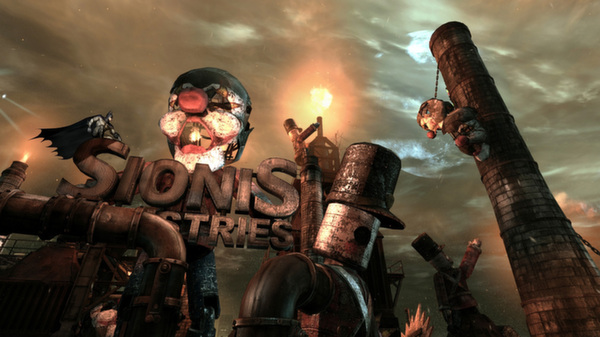 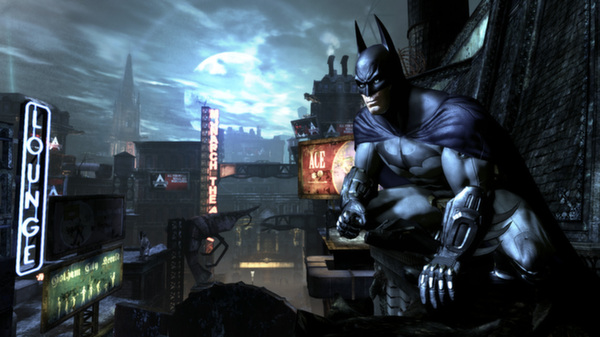 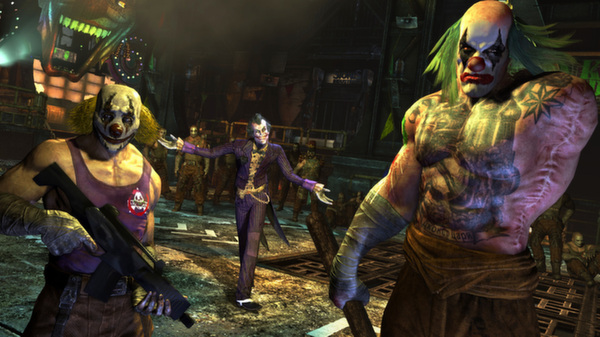 I highly recommend playing the Arkham games in the order of release:  Arkham Asylum, Arkham City, Arkham Origins (not an official part of the trilogy, Origins was made by a different developer) and Arkham Knight.

When starting a new game, the Options are few:  Difficulty, Subtitles, Hints and Brightness.  Once you're in-game, you have a lot more to choose from, ranging from separate sliders for sounds to controls and more.

Arkham City, a super-prison built in the seediest part of Gotham City.  Here Gotham houses their most violent criminals, hailing from both Arkham Asylum and Blackgate prison, coming together into an environment where they must fight to survive.  Bruce Wayne is in the middle of protesting such a dangerous threat to public safety when he is kidnapped and dropped right into the middle of the prison city... Right where Batman is most needed.

Arkham City picks up some storyline threads from the first game, Arkham Asylum, expertly weaving them into this new story arc, whilst maintaining the integrity of the Batman mythos.  I would like to once again encourage you to play Arkham Asylum before starting this one, as it explains both a major plot point, and the reason for the conspicuous absence of two of Arkham's worst super-villains.

After having played all four of the Arkham games, I can still say that Arkham City is my favorite... although only barely!  The first game was very linear, and while I enjoy that, it turns out that I like open world even more.

Ah, but I should start at the beginning, and that beginning has... an hourglass figure, a too-revealing latex outfit and whiskers?

You read that right!  We begin the game playing as our feline friend, whose decisions will help shape the fate of the prison city.  We will actually bounce back and forth between playing Batman and Catwoman, though of course most of that time is spent with The Bat. 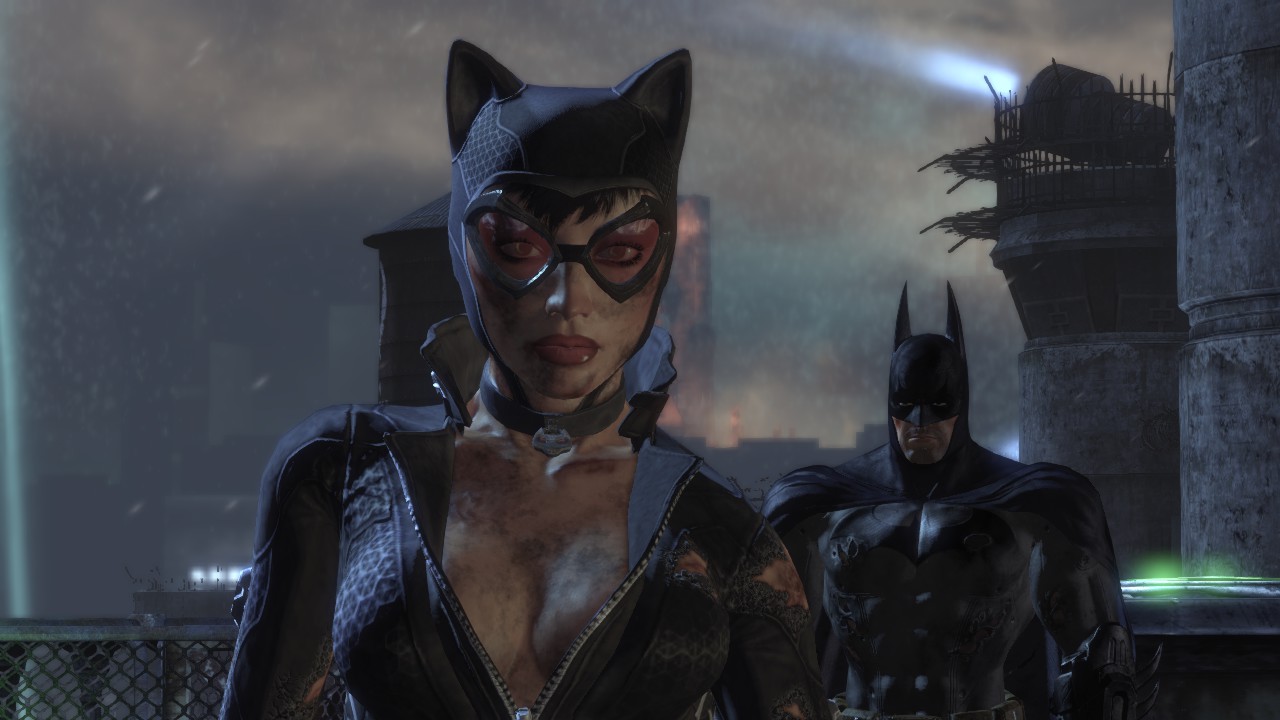 Most of the gadgets that we used in the first game return, but there are still plenty of upgrades to purchase when you go up levels!  We also have some upgrades for Catwoman, although decidedly fewer to choose from.

Although we have a driving storyline, you'll find that there are many side quests, each with their own objective and story.  You can change your primary objective at any time via the MAP, and set custom waypoints as well.  For those not familiar with the Arkham games, the waypoints will both give you a beacon (the Bat-signal, of course!) and a compass heading to follow so that you don't get lost.

Riddle me this!  Who has hidden four hundred riddles and trophies about Arkham City?  Well Nigma, of course!  You will not be able to solve the actual riddles or use The Riddler-specific buttons until you unlock his story, although you can pick up any trophies you happen to stumble across.

To unlock Riddler's story arc, you must wait for the side mission to investigate the missing medical team to appear.  if you're early in the game and can't scan anything, don't worry - this arc will not happen until you investigate the steel mill.

Although 400 is a truly daunting task, it's not as bad as you might think.  Once you unlock Nigma's story, you'll be able to spot Riddler informants, who will give you exact locations for the trophies, etc on your MAP... IF you save them for last.

PRO TIP: Once you have the freeze blast, just freeze the informant to immobilize him so that you don't accidentally KO him before you take out the others. 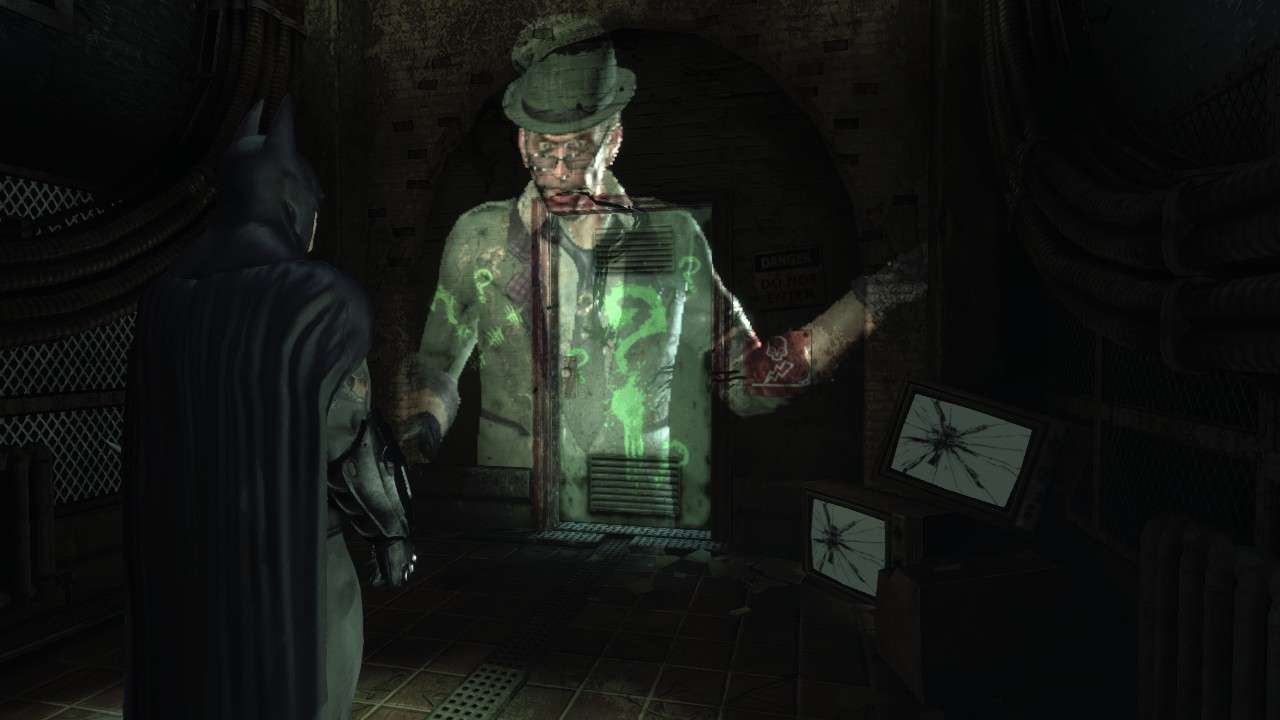 Even if you are not an achievement-hunter such as myself, the plethora of riddles and trophies are a benefit to all players, as they will earn you extra experience to help you level up faster.  On the down side, quite a few of The Riddler's trophies are dependent upon mastering Batman's flying skills and/or fast movements.

The voice acting is, of course, superb.   Kevin Conroy and Mark Hamill return as as Batman and the Joker, respectively, and they are AMAZING.  I couldn't not imagine more perfect voices for these two, and every other character is just as beautifully-voiced, with nary a poor performance in the entire game.  The SFX and music are just as flawless as the rest of of the sound work.

The graphics, as you can see, are gorgeous. One of the upsides of tracking down all of The Riddler's content is that you get to see how much incredible detail the devs have added to the city.

Unlockables include concept art, character trophies and biographies for all of the characters. 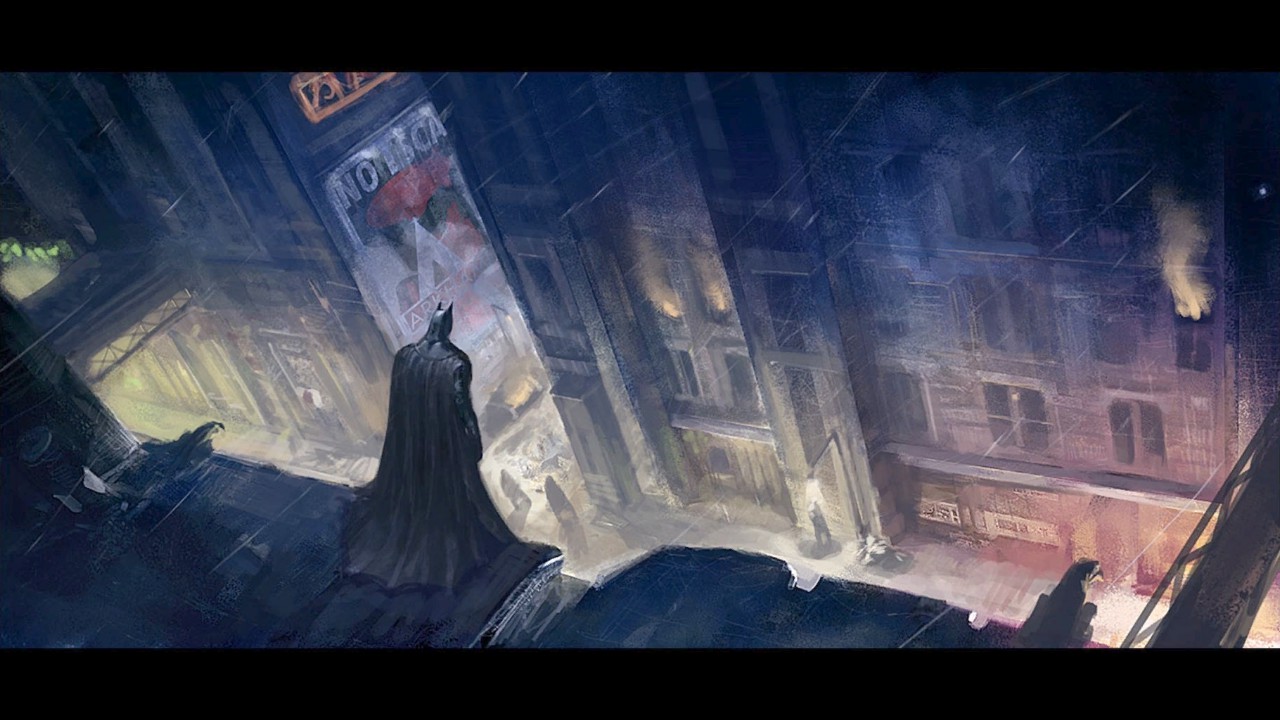 Items are unlocked both through story progression and by solving riddles, finding trophies and by busting breakables.

Oh, didn't I mention the Breakables?  You'll find them scattered across the game, and although most of them are inside of buildings, you'll also find two types out in the city at large.  Luckily, there are ways of adding these to your map!

Riddler's Revenge, which gives you Standard, Campaign and Custom challenges - Choice of playing as Batman, Catwoman, Robin or Nightwing.  The Standard option will put you into an arena setting, where your goal is to score as many points as possible, with three medals possible for each.  Campaign will give you a gauntlet of challenges to complete in order to earn medals, and Custom is self-explanatory.

Bonus Chapter:  Harley Quinn's Revenge is available from the menu once you choose your profile.  Here you will play both as Batman and Robin, and you'll have a choice of three outfits for Robin.

Speaking of outfits, once you have finished the main storyline, you will have your choice of 9 styles for Batman, ranging from Animation-style to Beyond Batman.  There are two additional outfits for Catwoman, which are linked to your choice for Batman.

I absolutely love the open world nature of this second game.  The tale progresses beautifully when you choose to pursue the main storyline, and the side quests have great narratives, making them fun, rather than an annoyance.  If you're a Batman fan who also loves open-world exploration, you're sure to enjoy this!
_________________
Never be a prisoner of your past.
It was just a lesson, not a life sentence.