Batman™: Arkham Knight brings the award-winning Arkham trilogy from Rocksteady Studios to its epic conclusion. Developed exclusively for New-Gen platforms, Batman: Arkham Knight introduces Rocksteady's uniquely designed version of the Batmobile. The highly anticipated addition of this legendary vehicle, combined with the acclaimed gameplay of the Arkham series, offers gamers the ultimate and complete Batman experience as they tear through the streets and soar across the skyline of the entirety of Gotham City. In this explosive finale, Batman faces the ultimate threat against the city that he is sworn to protect, as Scarecrow returns to unite the super criminals of Gotham and destroy the Batman forever. 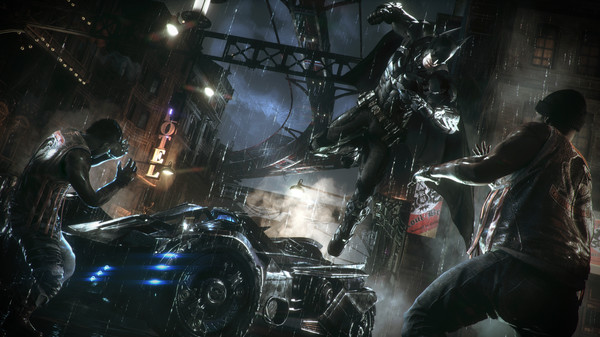 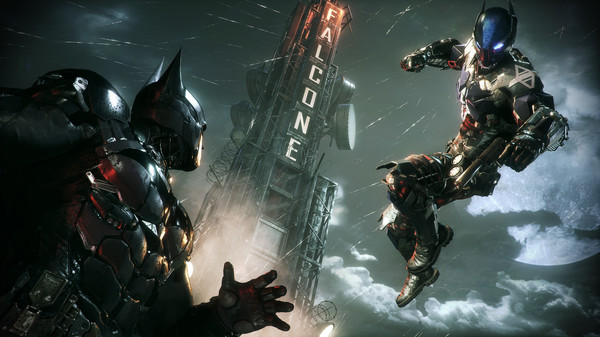 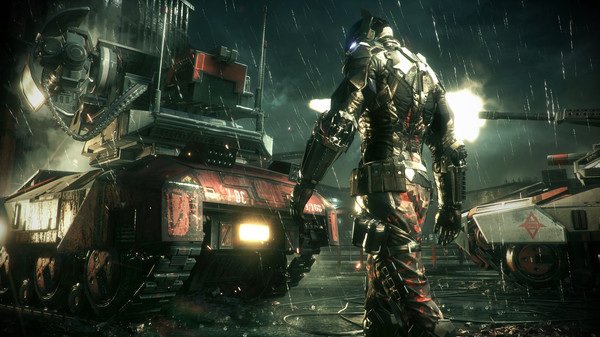 There is a lot to be said about the final chapter of this trilogy, and while not all of it is good, I still definitely recommend the game. Let's get the BAD out of the way so that we can focus on the GOOD.

GLITCHES: I only saw two actual game glitches. One was where a character mysteriously appeared OUTSIDE of the compound where I'd been fighting his crew, and the other was that the bat signal indicated a quest item being over the WRONG building. Not bad, as far as glitches go!

TECHNICAL DIFFICULTIES: They are many, and could be game-breaking if you are not comfortable with adjusting some files. I had no troubles in the beginning, but then the problems started: Lagging, crashing, and even completely shutting down my computer with zero warning. *cries* Lagging I can deal with. Crashing I can deal with. Shutting off my computer over and over again? WHYYYYY??? It started happening so often that despite how much I was enjoying the game, I was beginning to think that I'd have to stop playing...

... and then I found the Master Fixes for BATMAN ARKHAM KNIGHT thread at Steam, and my hope was rekindled. It turns out a couple of files corrupt over time, and all I had to do was delete one file and one folder, then verify the integrity of the game cache (very easy on both points), and voilà -- WORKING GAME! *cue angels singing*

GRAPHICS: If you don't have a new enough graphics card, the game won't even start for you. The plus side of the high-spec card is that the graphics are amazing. From the smallest dust particle to the sweeping bridges and skyscrapers, Gotham City truly feels alive. Every crack in the sidewalk, every fierce tattoo, each choppy wave and craggy wrinkle tells a story that makes you want to know MORE. The people may not be as attractive as in previous installments, but they are more realistic, and they truly have character. The devs have introduced a photo mode, where you can pause the game and do a nearly 360-degree rotation to get just the perfect shot.

THE GADGETS: We do have a couple of new gadgets to play this time around: A voice synthesizer which allows us an extra layer of tactics by giving orders to assailants, plus the Batmobile, which I'll come back to in a bit. The gadgets are by and large underutilized and not really explained, bringing back my recommendation to play the games in the order in which they were released: Asylum, City, Origin, Knight. Not only will these previous installments give you a feel for the story, combat, gameplay and general useful knowledge, but you'll get to play some GREAT games!

THE INTERFACE: Most of the controls are the same as what we're accustomed to, though they had to do some tweaking in order to include...

THE BATMOBILE! What a great addition to the series! Not only can you zoom around Gotham City like a boss, you can destroy half the city as you go~! I had great fun running down criminals (literally... Muwahaha), blowing up cars, knocking down trees, fences, support pillars... you get the idea. *evil grin* In addition to a new form of transportation, we have a great many quests, riddles, and fights to win using the Batmobile, which is not only a car, but a BATTLEmoblie! At the touch of a button we can transform it to a highly-maneuverable tank in order to kick all ass. We can even do Batmobile-assisted takedowns with Wayne's patented non-lethal rounds. "It's like being punched in the chest by an angry gorilla!"

Many of the Batmobile quests are optional, but you will HAVE to develop some proficiency, as eventually you'll have to use it to progress in the story.

COMBAT: As usual for the series, combat starts off deceptively easy, then amps up in difficulty as you progress. We have the new Fear Multi-takedown ability, which enables you to take out up to six enemies within seconds... provided that you can come upon the group by surprise. There are also points in the story where you can play two characters at once, and during this time you can do multi-character takedowns. Those are great fun, let me tell you! ;D

We have some new attacks that we can do whilst gliding, plus the items mentioned above, but nothing really game-changing about the combat. We've got our guys with riot shields, cattle prods, brutes, guns... and a few little extra things that I'll let you discover for yourselves.

THE STORY: When the game started, I felt that the side missions were much more engrossing than the main storyline. I went through the game knowing not only exactly who our mystery assailant was, but why we were being attacked... Absolutely positive right up to the moment of the unmasking, and then... Everything changed. That which had been mildly interesting was suddenly fascinating. My mental shift was profound, as far as such things go, and it pulled me into the story in ways I had never considered. Although one aspect of the story I had totally nailed, there were several real surprises throughout, something which I really cherish. A good story is something that I truly appreciate, but you have a good story with great gameplay, and I'm in heaven!

THE ENDING/THE RIDDLES (Still no spoilers!): You must secure a certain number of criminals in order to view the final sequence of the game. You do not have to 100% the game to see the ending, BUT, to get the FULL ending, you have to defeat The Riddler, and THAT means solving, saving, maneuvering, finding, and destroying a total of 243 riddles, people, courses, trophies, and destructible items.

The riddles are the one thing I won't be doing 100% on this time around, though I did get 100% on the rest of the content.

If, like me, you don't plan to solve every single riddle in order to secure the post-Riddler portion of the ending, then NEVER FEAR, YOUTUBE IS HERE! Although some may feel that it's not really important to see that extra tidbit of story, one little sentence during this scene completely changed how I felt about the ending of the game. I'm not gonna add a link, since that's just too tempting to click, and I want this to be spoiler-free.

IN CLOSING: I loved this game, and if it weren't for the technical problems that I encountered, it would be my favorite of the series. As it stands, I rank them as follows: Arkham City, Arkham Knight, Arkham Asylum, and then Arkham Origins. Definitely a MUST-play!

This DLC adds four new story-arcs to the base game, featuring four of Arkham's Most-Wanted:

The Mad Hatter - This guy really feels like a non-entity to me, but the trippy landscapes you end up in add enough interest to keep his story-arc from being totally boring.  I recommend doing this DLC early on, as it is the weakest story of the four.  You will only need the Remote Hacking Device to complete this one.

Killer Croc - Ahh, Killer Croc.  Here you find out what happened to him after the events at Arkham Asylum.  I don't want to give any details and ruin anything for you, but I will say that I'm mildly surprised at his fate.  I don't remember what gadgets you might need.

Ra’s Al Ghul - Ra's disappeared at the end of Arkham City, and now we learn his fate.  There is a surprising amount of blood in this section - more than I remember seeing in the rest of the games combined, although of course none of it caused by us.  Like the Azrael story-arc from the main game, you choose the outcome, and the ending will be wildly different depending on your choice.  You will need the Remote Electric Charge gadget before you can access this story.

Mr. Freeze - This story gives us true closure, and takes us places I never expected to go with Mr. Freeze.  You will need to be adept at maneuvering the Batmobile before you can complete his tale.  This was my favorite of the four.

I really enjoyed this DLC, and although I don't think that it is worth the full purchase price, I am very happy with my discounted purchase.  Recommended!
_________________
Never be a prisoner of your past.
It was just a lesson, not a life sentence.