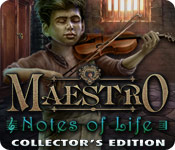 Stop the young prodigy and save everyone from his evil plans in Maestro: Notes of Life! A missing girl has been lured away by evil music and now it’s up to you to save her in this incredible Hidden Object Puzzle Adventure game. Find the source of the music by scouring beautiful locations and put an end to the deadly tune. Solve tricky puzzles to become a hero and complete your journey in Maestro: Notes of Life! 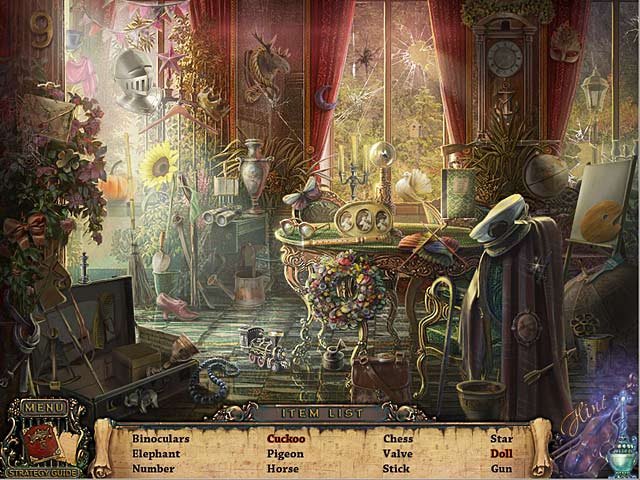 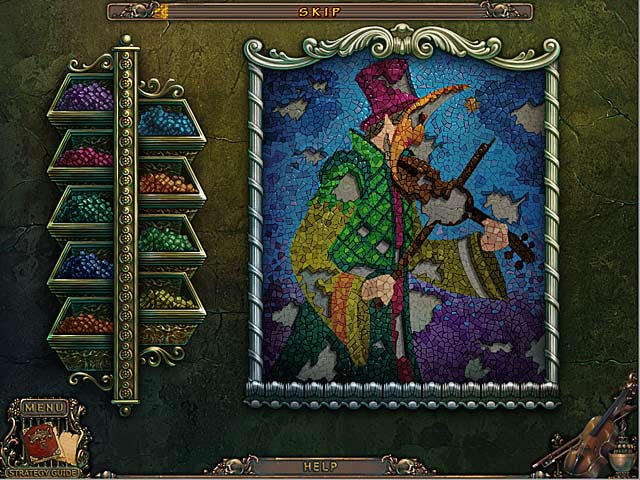 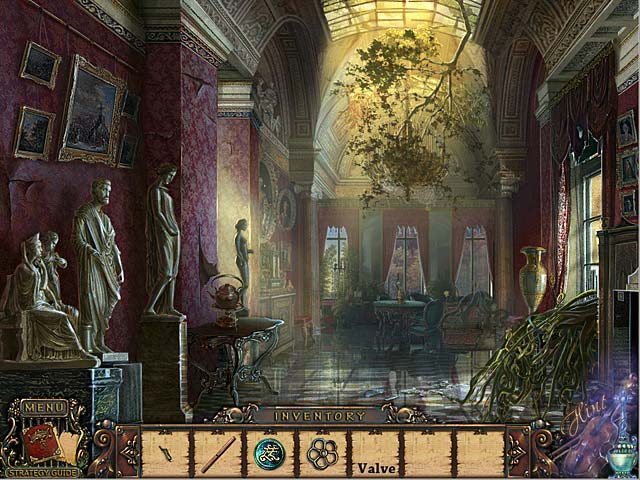 FIRST IMPRESSIONS
Again the Maestro series presents an enjoyable relaxing game, not any more difficult than you want it to be, but not tough enough, I think, for the hardliners.

The opening has a small waif alone in an empty cathedral. He walks to the front, takes out his violin, and in the wonderful acoustics of the vaulted space begins to play the "Notes Of Life". Haunting.

SIGHTS & SOUNDS
As with the first game, the graphics for this game include gloomy grey and sometimes even ugly. The zombie dude, eeyoo! . It is a dark game with a creepy theme and that is reflected in the artwork. Once again, it is the brushstrokes of ERS, in a rougher, darker form than is usual now. The voiceovers are okay, used wisely, but not as good as the those of the first game. The music is very similar, and the theme song obviously. Sound effects are ambient noise was really, really good, sometimes quite scary.

WHAT’S HAPPENING
Having saved the town near Paris from the Music Of Death which was aging everyone, we are called in to help when another town suffers a strange musical plague of accelerated growth – the Notes of Life, played by another child prodigy. A young girl has been lured down into a deserted cellar, and you must rescue her.

MAKING PROGRESS
Again, this is a HOP dominated game. There are oodles of them, with a little more interaction that the original game, and again they are visited twice. The scenes are sometimes dark enough to bother some people, but not enough to make items too hard to find. The puzzles are likewise easy for the most part, but again, not quite as easy as before.

The most important improvement in this game is the choice of difficulty levels – casual, advanced and hard. On hard there are no hot spots indicated, but HOPs are, and skip and hint take forever. There are far fewer black bar comments, and most of them are fairly useless. Again, there is no map and a hint that is useless outside HOPs.

FINAL VERDICT
This game shows a small step up in sophistication, but overall it is very much like the first Maestro. Which is to say, an enjoyable and easy game with a dark and atmospheric mood.

Although Notes of Life is a continuation of the first game, Music of Death, the backstory is handled in a way that does not give spoilers, so you *can* play them out of order if you wish... I just don't recommend it ;)

Options include separate sliders for Music and Sound, Full-screen, Widescreen and Custom Cursor. Choice of three difficulties, which can't be changed once you start playing.

A young girl is abducted when she searches for the source of some mysterious music, and it's up to you to find her and bring her back home.

There are some confusing moments RE: the storyline, but this is intentional - rest assured that everything will become clear as you progress.

Our Journal documents any clues we come across, and also adds some extra depth to the story.

There are some leaps of logic in this one, but nothing too far-fetched.

We have no MAP, nor any form of instant-transport, but once again the devs kept the backtracking down to a minimum.

Using a HINT during the adventure portion of the game will either point you at an area of interest, or tell you that there is nothing to do there.  There is no directional hint, but sections of gameplay tend to be contained in a small enough area that usually you're not going to have to go very far to find what you need.

The Hidden Object Scenes are your standard find-by-list, with items bordered in orange needing some kind of interaction before you can locate them.  These scenes will repeat once, but the things that you find the first time around will stay gone.

It felt like there was a better balance between adventuring and HO-hunting this time, but it's probably just as HO-heavy as the first game.  Most of the puzzles were interesting, and not just the standards that you usually find in IHOG's.

Although there is definitely a creep-factor, the graphics are much more vibrant in this installment, are are at times quite beautiful!

WARNING for those sensitive to such things: There is both a giant, angry snake and a scene full of spiders.  I don't have a problem with creepy-crawlies, but even I got the heebie jeebies! lol~

The music and sound effects were very good, and one SFX in particular was really freaky!

Although the main game was fine where it left off, I feel that the bonus gives us a much more complete ending.  There's actually a small segment in there that you won't want to miss if you're planning on continuing the series, so be sure to check it out!

Gameplay in the bonus was just as good as the rest of the game, and took maybe an hour and a half to complete.

This second game isn't as creepy, overall, but still had a couple of frightening moments in it.  The locations are rich and varied, the voice overs nicely-done and the overall gameplay still HO-heavy, but well-balanced with the adventuring.  Recommended to IHOG-lovers!
_________________
Never be a prisoner of your past.
It was just a lesson, not a life sentence.