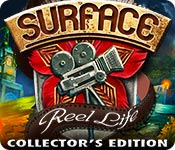 Your sister and her daughter, Jane, were enjoying a screening of an old movie, when one of the actors literally stepped off the screen! Now Jane is missing, and the building is crawling with strange plants and animals from the movie. You solve all the puzzles in your way and rush to the theater to find a way into the world of the film to save your niece. But once you do… you realize that the mystery - and the danger - is much deeper than you could have imagined. Can you escape before your adventure becomes a tragedy? Find out in Surface: Reel Life, a thrilling Hidden Object Puzzle Adventure game!

Wonderful, But Not The Best Surface*****

FIRST IMPRESSIONS
Not as impressed as I usually am by this low key intro to the fifth Surface game. The cut scene graphics are cartoony and very very rough, compared to the other aspects of the game. And the only thing surprising about the story is that it hasn’t been done more often. Every time I see a game title with anything related to the movies, I always expect it – the actor coming out of the screen.

SIGHTS & SOUNDS
Apart from the cut scenes, the graphics are excellent, although not, I would say, inspired. I much prefer the images of say, Pantheon – beautiful, imaginative, original. They are also strangely slow. At the end of a brief narrative bit, the ‘film’ will keep rolling even though nothing is really happening. I couldn’t figure out why. The sounds are good, and I feel a good deal better than their visual counterparts. The music and sound effects are very fitting and realistic, and the voiceovers are well done.

WHAT’S HAPPENING?
Your sister and niece go to the cinema to see your niece’s late fiancé in his last film, made some 10 years ago. Something shocking happens, though, the fiancé steps right out of the screen and grabs your niece, dragging her reluctantly back into the film. In the meantime, the rest of the movie is busy relocating as well, and there are some pretty amazing creatures in this jungle epic. Once you save your aunt from a tiger, you realise to solve this dilemma you are going to have to enter that dangerous jungle world. Super Auntie to the rescue and it isn’t even a Grim Tales game! *wink*

GAMEPLAY
The gameplay is a fairly easy adventure with enough of both puzzles and HOPs to satisfy your desire for either. The puzzles so far have been relatively simple, familiar and prettily done. Again, nothing engagingly original, but enjoyable. The HOPs are strictly word list, with only one or two interactions, which are with inventory items, not in the scene.

There are inventory items that require further additions or manipulations to be useful. The game has the usual range of up-to-date features. Three levels of difficulty, inventory lock, journal (with replayable videos), an odd-looking interactive map that indicates scenes with tasks and completed scenes. The hint system is also teleporting. There are 7 chapters, and the demo, which took me almost exactly an hour, covers the first two.

CE BLING!
For me, the most exciting bit of the game so far! We have of course a bonus chapter. The Strategy Guide is available in game as well as in the main menu. The gallery includes nicely done wallpapers (10), saveable concept art (10), music tracks (5), and a screensaver.

There are a fair number of performance-based achievements, in their own display setting, 4 of which are related to the 160 collectible metal flowers. All of which are needed to gain access to the Secret Room. Which, if you have played any recent Elephant game, you will know is where you will find a game that is almost another game using the same puzzles and HOPs. I like to call it the ‘Readers Digest’ version of the game, and I love it!

COMBINED IMPACT
It’s a winner, despite the disappointing standard of the cut scenes. I can’t resist a jungle adventure, even if I could have held out against the bonus content. But I don’t think it stands up well against the last Surface game, The Pantheon.

Mahaha~  I had to quote this from the first post before I edit in the game info:

JustTheFacts wrote:I can't believe we are up to number 5 in this series! I remember reeling at the impact of "Another World" as though it was yesterday.

Oh, groan, I did it again! That pun reelly, um... really, was unintended!