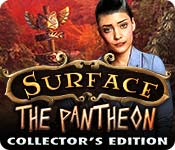 It should have been a tremendous achievement, but the tunnel through the Ridge of Leviathan became the site of a great disaster. What really happened that day? You were supposed to have been on the train with your husband and daughter, but you missed it. And then they disappeared from your life forever.

It's one year later, and a strange man - a scientist who thinks this is just like the Bermuda Triangle and other such vanishings - invites you to take part in his greatest experiment: To recreate the conditions of that fateful day in Surface: The Pantheon!

Re: Surface 4: The Pantheon

The Surface series is one of my favourites. You can rely on top quality production values, thrills and spills, and interesting gameplay. The great appeal of this series is the masterful conception and creation of alien worlds, given depth and credibility by the attention to detail and the imaginative drafting of characters and locations.

The intro to this game is a bit different, with a stutter-like flow of images rather than the more familiar video form. Still the excitement and spectacle that we expect from a CE though.

Actually, the video cut scenes, normally a high point, are not as fantastic as we’d normally expect from Elephant. Images aren’t clear and there’s some pixilation. The graphics in the locations and the HO scenes, though, are excellent, and despite this being a fairly dark game, quite clear and bright. The voiceovers were a little overacted, but on the whole added to the experience. Music, wonderful, the same for ambient sounds.

A year after your husband and daughter are caught in a mysterious train disappearance, you go back to get some ‘closure’. There’s a nutty scientist there who says he may be able to help you reunite with your family. He’s not a man you’d immediately take to, but you’ll do anything to see them again.

And seems as if the scientist knows his stuff, because early on you both are dropped into the crash site of the train. The story you follow is of the survivors of that wreck, and the war you must wage against the evil you discover in this strange and hostile world. Although the story has been done before, there are some interesting additions here that make it unique.

Marvellous combination of gameplay. Almost every puzzle was new to me, and ranged in difficulty, all definitely doable. Hidden Object Puzzles (HOP) are well presented interactive lists. Both puzzles and HOPs are fairly well balanced and are nestled in an adventure that I found a little more challenging than most games. Hint is a hint, skip is fast (on casual), there’s also a journal, a task list and an interactive jump map. Transporting is not really necessary because each chapter is kept in a small area.

There’s a lot to be said for the CE extras in this game - See below.

If you can afford it, or are willing to wait for a sale, I would advise getting the CE this time. Those extras are really u-beaut, as we Aussies say.


BONUS CHAPTER
It is one step further into the story, not at all necessary for a satisfactory conclusion, but there is a bit of a teaser at the end of the main game. It offered all new locations, puzzles and HOPs, and took me a little over an hour to play, with a couple of skips. Collectibles continue in the bonus chapter.

GALLERY
The wallpapers are very good, as far as wallpapers go. I’ll use mine until I’m bored. The concept art can be saved. The music – which is wonderful – can be saved as well. There is a screensaver, and replayable videos.

STRATEGY GUIDE
It does what these things do. Is well laid out and useful. Easily accessed and read.

ACHIEVEMENTS
These are pretty much what you’d expect. They are related to HOPs, mini-games and collectibles. They are displayed imaginatively in a great office location.

THE PANTHEON - !!POSSIBLE SPOILER!!
THE absolutely best thing about this game. I have only ever seen this kind of thing done once before, and I suspect that was an Elephant game as well. As with many other CE games today, this one gives you unlockable, replayable HOPs and mini-games. It’s the way it is presented that’s so special.

The pantheon is a separate location where these puzzles are displayed. They actually look like another achievements room and in a way they are. In order to play these games you must first collect enough of the collectible flowers. This gives you access to a non-skippable puzzle. The answer is of course in the SG if you really need it.

I love it! Don’t feel up to playing the full on game, but want there to be some purpose to the wandering puzzle to puzzle? The pantheon gives you a drastically condensed version of the story that some HO fans might even prefer to the main game.