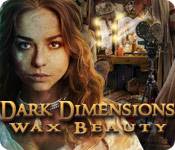 You’ve tracked down the latest Dark Dimension to Red Lake Falls, where a haunting beauty queen begs you to save the town – but from whom? Is it her brother, last seen busting through a shop window in a jealous rage? Or his stalker girlfriend? The real villain in this thrilling Hidden Object Puzzle Adventure game just might shock you – unless you’re turned into wax first! 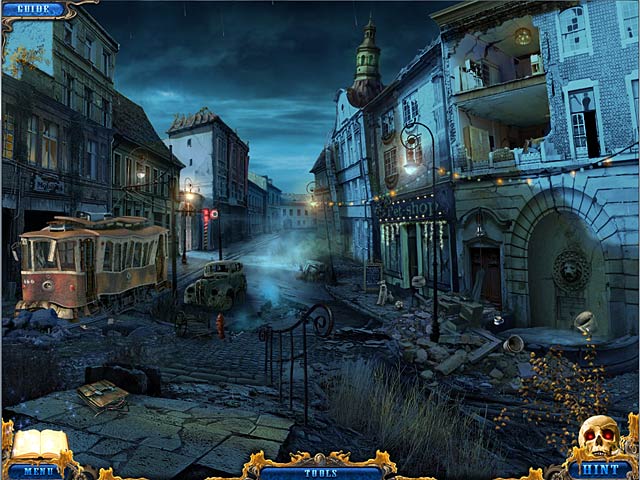 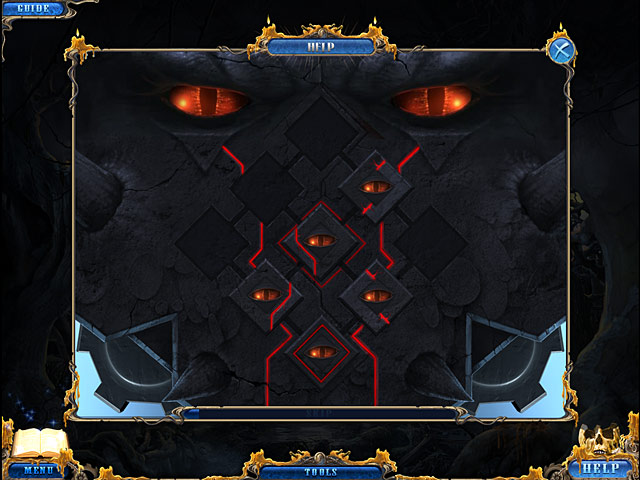 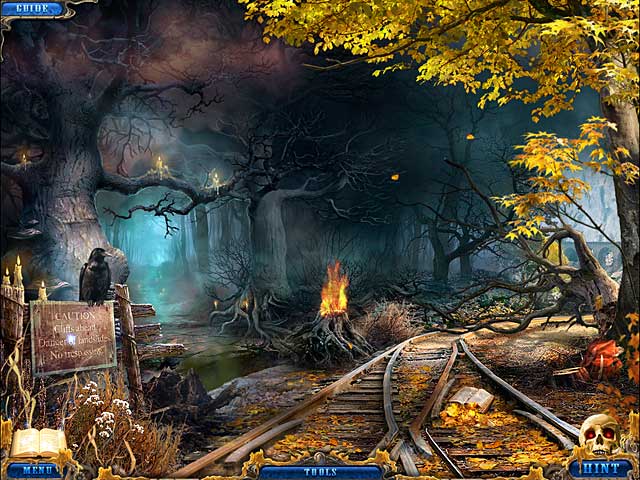 So many important things to say about this game that I had to take a breather and get them down. This game is a long and arduous journey for me, an intermediate puzzler, HO diva, and intrepid adventurer. Don’t get me wrong, it is a good, probably a great, game, but it is too much for one sitting that’s for sure!

I was disappointed to find that the “Beauty” of the title didn’t bring with it beauty in the artwork. It is top quality, talented work, but no one has given us gorgeous fantastical concoctions. Instead we are not-so-welcomed into town by living wax grotesqueries and statues we just wished we could be sure WERE wax. In other words,  the atmosphere is one of a seriously creepy game, based around an equally creepy story. I want to take a moment for the story.

This is by far the best job of characterisation I’ve seen in over 500 games I’ve trialled and played. The emotional conflicts between the girl and her brother, his frustration and confusion, her hurt and sense of betrayal is the best. The relationships between the other lead characters are excellently portrayed too. And their weaknesses, eccentricities and obsessions. I don’t know if this is helped by having live actors (who were a bit over the top I thought), but certainly the dialogue and frequent well-timed very well crafted cutscenes really added to the reality of these people’s dramas. I found myself taking sides in the arguments – and my mum sat in for a while and sided against me!

Finally, it would not be right to write about a Dark Dimension game without mentioning the high quality, difficulty, and originality of their games. City Of Fog, the first of this series, was notable for them as well. However, as with that predecessor, a number of original games don’t have clear enough instructions, in the game or in the strategy guide. Us amateurs need a little more hand holding. At the very least I hope to see more reset buttons in future games. Oh, and very interactive and entertaining HOS.
Now I‘ll go finish off the bad guy/gal...

WARNING for those sensitive to such things:  One large spider and two snakes that we need to interact with.

Dark Dimension: A place where the border between the living and the dead has fallen away due to some kind of atrocity or injustice, causing the area to be displaced from time and space.

Options include separate sliders for Music and Sound, Full-screen/Widescreen and Custom Cursor.  Choice of Casual or Advanced difficulty.

We continue our search for Dark Dimensions, and have found one in a place called Red Lake Falls. The ghost of a young beauty queen beseeches you for help, here in the town where the wax figures are more beautiful than real life. Although Wax Beauty is a complete story, there is an ongoing storyline that ties the these games together.  The first game, City of Fog, is excellent, so I recommend playing that one first!

The story advances through a series of cutscenes and notes/journals that we find as we progress.

Our Journal gives us extra story to enjoy

, and nicely summarizes the longer notes that we find... You know, for those who don't like a lot of reading in their games. ;)  Sadly, there are some hints in there, but I guess they'll be helpful if you get stuck.

The Dark Dimension itself is a great explanation of why things are different than in the real world, but I was nonetheless a bit irritated with the game logic.  I really need to learn to just let these things go. lol~

There is no MAP, nor fast travel, but most of the time the active areas are in a tight group, so not a lot of backtracking.

Using a HINT during the adventure portion will either highlight an area, or show you which direction you should take.

The Hidden Object Scenes are lightly to moderately interactive, with items listed in yellow needing some kind of action before you can collect them.  Items on your list will actually help you find the interactive objects.  For instance, you may have a gnome listed in yellow, but you can't collect him until you find his hat - which is also listed - and place it on his head.

The gameplay was mostly well-balanced, but there are also times when you play HOS almost back-to-back.

Wax Beauty features live actors, and their performances are OK... I was a little thrown off by the speaking parts not syncing up with their lip movements, but it's possible that the actors were not originally speaking English.  Be warned that some of the cutscenes are very long due to the actors pausing either for dramatic effect or for their lip movements to catch up. *giggle*  Cutscenes are skippable.

Both the sound effects and the music were well-suited to the environment.

There were a few pretty scenes, but the overall graphics for the game are kind of junky.  There WAS a massive earthquake that took out half the town, so perhaps this was intentional.

The extra chapter takes place just about immediately after the final cutscene.  Here you will deal with the aftermath of the main story's conclusion.  I highly recommend playing this, as you'll discover something very important about the cult that is involved with these stories.

The bonus has the prettiest graphics in the game, and the gameplay is the same as in the main story.

I am hypersensitive to issues relating to logic (Why yes, I do analyze movies and pick them apart. How'd you guess?) so I had a few moments of irritation as I played.  Still, this was an entertaining game with an interesting storyline, and one that I recommend to my IHOG-loving friends!
_________________
Never be a prisoner of your past.
It was just a lesson, not a life sentence.