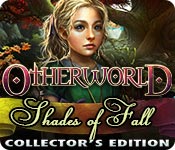 Go on a quest to defeat an ancient evil. There's a magical world hidden beneath ours in this hidden-object puzzle adventure - but first you must gain the Sight to save it! The Shade is more powerful than ever, and magical creatures across the land tremble at the passing of the seasons. Continue the struggle with Fiona and the Storm Cat as fall sets in and discover secrets in both our world and in the Otherworld. Can you stop the Shade before the Eternal Winter arrives?

The previous two Otherworld games have been breathtakingly beautiful, entertaining and challenging. This one tops them on all fronts.

Particularly impressive to me is the originality of both the puzzles and the HOPs. According to the bonus content, there are 23 HOPs and 24 other puzzles. Yet the HOPs are so different from what we’re used to, it’s hard to decide which category a puzzle fits into.

In the demo so far (which I didn’t complete in the hour), we have only one interactive list, and it is so interactive almost every item is hidden from view.

The others include a HOP where multiples of certain objects are required, but can only be found using an arrow system to align their two parts in the scene. Tricky. There are others, all of them different, in the demo, but you get the idea.

The other puzzles and mini-games are equally original, brilliantly so, but not as difficult as the puzzles in the previous games – so far! Gorgeous to look at, they could easily keep me happily puzzling along for much longer. Skip is very quick (on Casual).

The adventure side of this game is also a little more straightforward this time. There is an interactive jump map, which is handy as there is a little to and fro action. There is no journal but another delightful idea, a ‘clues inventory’, which consists of photographs of those patterns, codes etc. for use later.

There are a lot of magical characters to meet, all beautifully drawn, with good voiceovers, including a white fluffy talking cat who becomes your hint button. I didn’t use him in that function, I used the map, so I don't know if he’s a directional hint or whatever. I do know he pipes up with the occasional comment of his own.

There is also the Perpetual Prison, which is what our quest is all about, we must repair it in order to capture the Shade (evil creature of dark magic) before he turns the world into endless winter. We must also again rescue Fiona.

If you’ve not played the other games, this will not interfere with your enjoyment, because the intro gives you a full explanation. The intro is extremely well done (voiceover, narration, cutscenes, graphics), but is not fireworks, both good and bad behave in a much more gentle way in this game.

The CE includes a bunch of extras, all the usuals, plus replayable mini-games. There are 60 fay dragons to collect. Easy to find, and not very well integrated into the scenes. I didn’t like them. There are also achievements, and a room to show them off.

This game is wonderful, and I may not be able to resist getting the CE on this one and upgrading the others. If you've not yet tried them, they are well worth a look.

PS. I thought I'd gotten over 'cute', but it seems I haven't. This is must have for me.
RenaissanceMom

Aw, I'm not the biggest "cute" fan but I enjoy this series so am willing to give it a go!! Thanks for posting your review.
JustTheFacts

Boomzap always seem to manage "beautiful" and "gorgeous" without descending into pure schmalz, so you might find it surprises you. Even the cat is cute but not in a saccharine way.
genkicoll

I just read that the BOGO sale code from yesterday is still working...

My favorite of the series!

Options include separate sliders for Sound, Music and Voices, Full-screen (auto Widescreen) and Achievement Popups. Choice of Casual, Expert or Hardcore mode (cannot be changed during gameplay.)  The Steam overlay does not work with this title.

An ancient evil, The Shade, works tirelessly with his dark minions to bring about the Eternal Winter.  Journey with Fiona and the Storm Cat (aka hint button) to find the perpetual prison and stop the Shade once and for all.

The intro for the game gives us a beautifully-succinct overview of the previous games, so Shades of Fall can be played as a standalone if you wish.

The interface is set up a bit differently than the norm.  We do not have a Journal, but we can toggle back and forth between our items inventory and a clues inventory.  Each time you find a clue, it will automatically toggle that section, and you'll have to manually switch it back to the items inventory and vice versa.

Be on the lookout for collectible fay dragons as you play. There's at least one at every location (sometimes two), but you won't be able to see them unless you have The Sight, so let me explain how that works:  You are a normal human - not one of the rare cases of a human born with magic - so you will need a trigger to give you the ability to see the magical world around you. The Sight will last you for the entire chapter, so it's not something you have to do often.

Our MAP is interactive and allows insta-transport, but it does NOT indicate where you might have missed a collectible.

HINTS are available during Mini-games, and using one during the adventure portion of the game will either pinpoint something on your current scene, or give you a popup with a location that you can instantly transport to if you wish.

The Hidden Object Scenes are richly varied, and all are interactive to some degree.  The latter part of the game is mostly done via find-by-list, but there are also a couple of fragmented object scenes, find-by-silhouette, placing items back into the scene, riddles and full-blown, highly-interactive hidden object puzzles!  So fun!

I enjoyed the gameplay so much that I didn't use a single hint or skip (although I did use the interactive map and strategy guide at times! lol~)  I missed ONE fay dragon, or I'd have gotten all of my achievements! >_<

You may now be asking yourself how I can tell you about how the hints work if I didn't use any, and the answer is that I started a new profile to get the info... Smart aleck! ;D

The graphics are gorgeous, and the fact that they had to draw many of the locations twice (normal sight vs. magical site) makes it all the more special.  The extra layer of depth that we see is reflected in the gameplay, and it really adds interest to the game.

The voiceovers are well done, as is all of the sound work for the game.

The epilogue gives us a little more information on The Shade and how to defeat him.  There are nine all-new locations to visit, as well as the remainder of the collectible dragons to find.  This chapter gives us some VERY important information and a great setup for the 4th and final game... Except that the game will never see the light of day.

Boomzap Entertainment stated in 2015 that Big Fish Games had decided not to continue the series. The final game, which would have been subtitled The Eternal Winter under Boomzap, will not be released.

This is a beautiful and immersive game with great gameplay and an interesting storyline.  It is a bit puzzle-heavy at times, but all of them were fun to do.  Despite the fact that the story will not be continued, I still highly recommend this series - especially this title.  You'll be missing out on some great games, otherwise!
_________________
Never be a prisoner of your past.
It was just a lesson, not a life sentence.