Professor Lupo and his Horrible Pets
by BeautiFun Games - July, 2019

Available at:
VOTE to get it at GOG
Steam

Become the most epic intern of all time (or at least save your own neck), in this frantic puzzle-adventure game!

Professor Lupo is a space scientist who’s been traveling around the galaxy on the Aurora Space Station, gathering the most impressive collection of aliens: his Horrible Pets. Adorable and harmless at first sight, these aliens turn into nasty, lethal creatures once they sense a human being close by. The Professor is on his way back to the Earth to sell them to the highest bidder for weaponization. But something has gone terribly wrong, the Aurora Space Station is under attack by unknown forces, and now the aliens are roaming free!

Your job as the Professor’s Intern has always been to act as bait for these creepy critters. Now, you will have to add a new task to your to-do list: find a way to escape, or become the aliens’ dinner! On your way, you’ll unravel the secrets hidden deep inside the Aurora Space Station, and if you’re lucky, maybe even learn something about your own past as well.

Featuring:
- Puzzle-adventure game strongly focused on the narrative!
- Learn the aliens’ behavior: use them in your favor!
- More than 100 levels and replayability: 12+ hours of gameplay!
- Distinctive English voice-overs for each character!
- A new hit from the creators of multi-award winning game Nihilumbra! 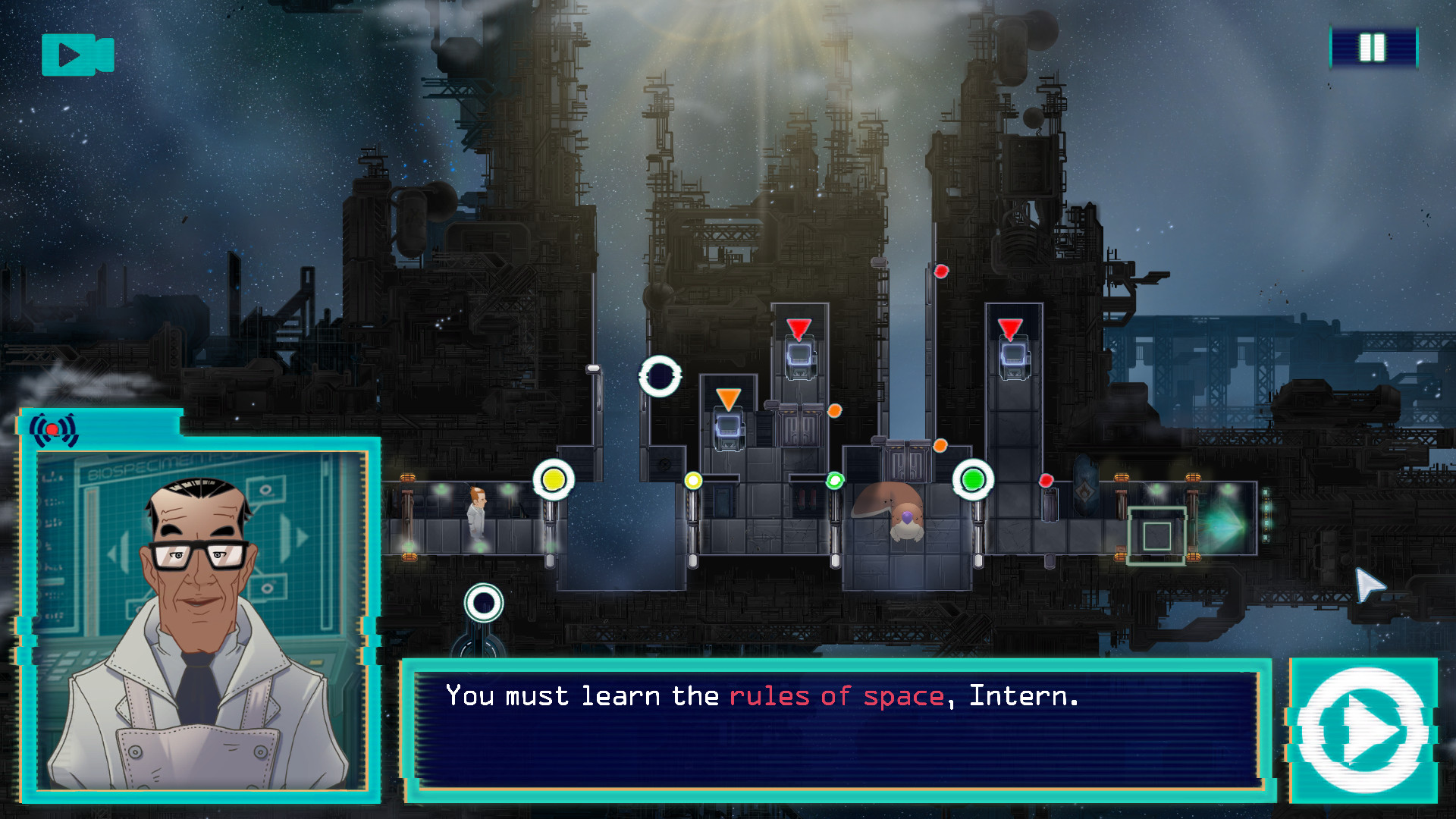 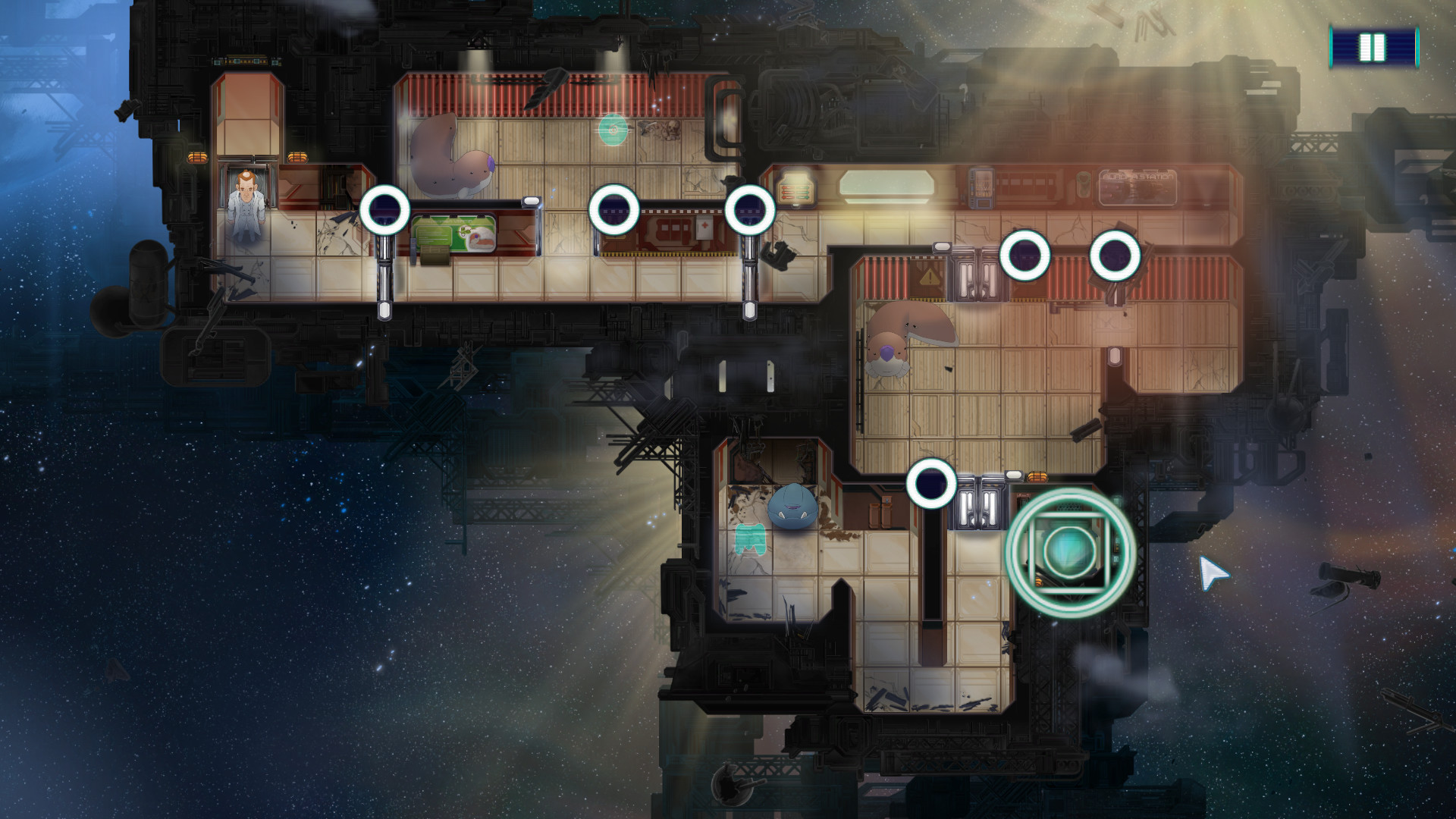 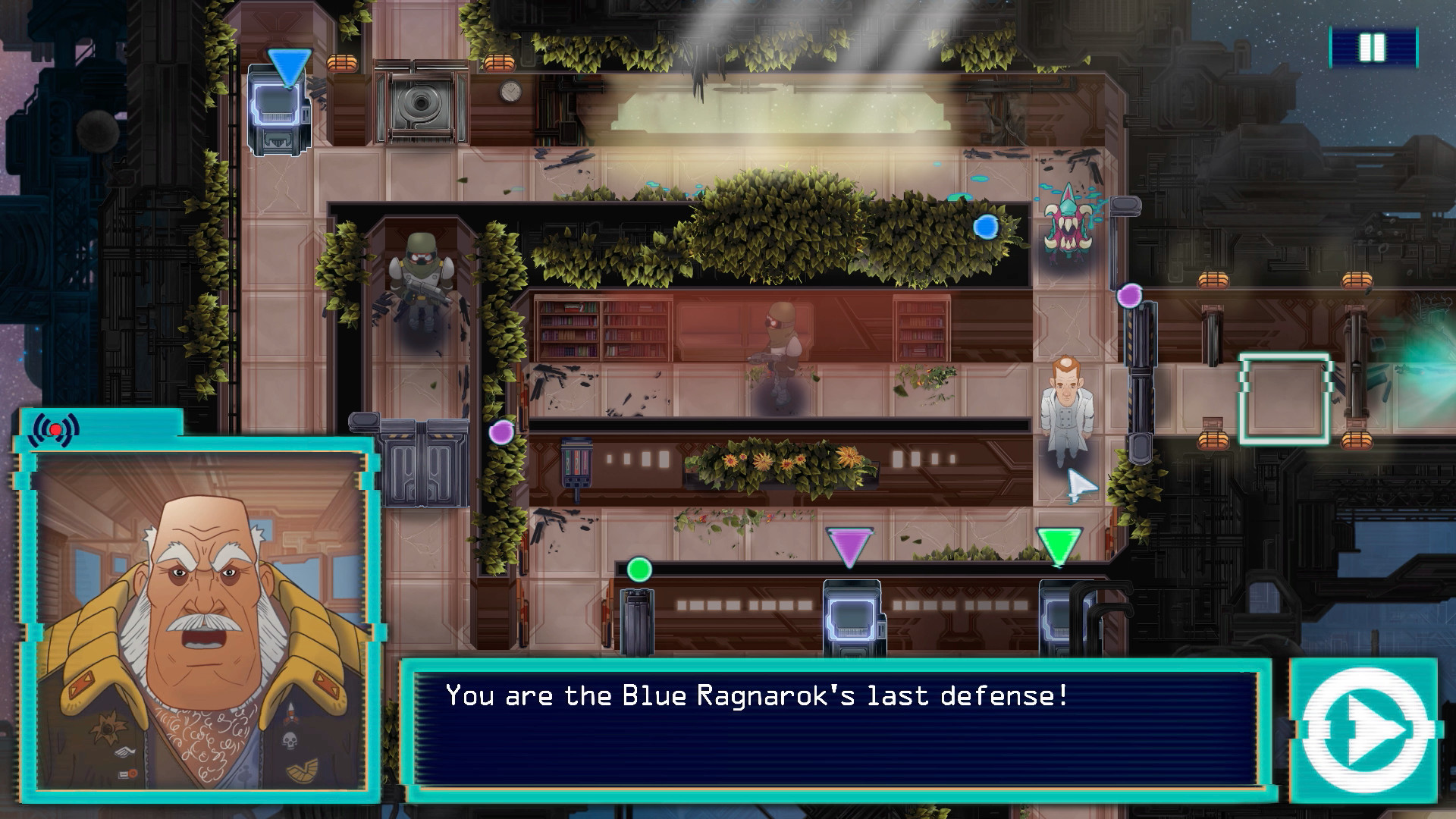 Put on your thinking caps and prepare to die.  A lot.

Options include separate sliders for Music, SFX and Voices, Full-screen vs. Windowed, Resolution, and choice of 10 different languages.  Can be played with a controller, or as a mouse-only game.

NOTE: The initial loading screen took a long time to load on my rig.  Be patient - it's getting there, and it's worth the wait.

Aww, look at the cute cuddly little thing with... great big teeth, and... a burning need to rip your lungs out, Jim.  Welcome to the wonderful world of Professor Lupo's spaceship, full of the most voracious critters in the universe.  Dear Lupo is on quest to sell his pets to the Earth's most vile super-criminals, all in the name of a tidy profit.  You, on the other hand, are a lowly intern whose job it is to be live bait during demonstrations.  All hell breaks loose when the space station is attacked by unknown parties, and the beasties run loose!  Survive.  That's all you want to do... Is that so hard?

The devs put a TON of work into the Archive, which is accessible via the Menu.  Here you'll find bunches of information on the killer-critters on board, including their movement patterns and other important information.

The story progresses via short cutscenes and dialogue with other characters. You can click through dialogue quickly by hitting the > button at the right side of the text boxes... Very helpful when you're replaying levels.  The story - and the gameplay - took one surprising turn after another, so I have to agree with the description - this game definitely has a strong and interesting narrative.

Dialogue is fully-voiced, and the the actors did a great job.  The monsters are all interesting in their own ways, the graphics work great with the story, and the sounds tie everything together in a neat little deadly-but-humorous package.

The graphics set the tone for the game beautifully, as do the SFX and music. There is no gore in this game... Well, no human blood, anyway, and all those deaths don't feel gross or disturbing at all.

You can zoom in and out on a level very easily, which is helpful (and necessary) for strategizing.

Lupo and His Horrible Pets is made by the same folks who created Nihilumbra, but make no mistake... These games could not be less alike.  Lupo has no platforming, great humor and the story is a world away... Literally!  We're in space!  Hah!  This is a point-and-click type of logic puzzle game - no reflexes required - but you need to click at just the right moment, lest ye die a very messy death.  There is a lot of trial-and-error in order to figure out your enemies, and the best way to learn is to become a snack.  Chomp!

Click (or use your controller) to indicate where you want to go, hit buttons to open doors and such, get to the exit and DON'T DIE!  Wait, didn't I just say you'll need to die?  I meant in the long run, don't die in the long run.

There is a tutorial, but the game leaves a lot for you to figure out on your own.  Each level you've passed can be returned to at any time, and you can also restart a level if you wish.  The game only auto-saves if you've done something right - it won't save you in a place where you can't survive - so keep that in mind!

Each level has up to three extra tasks you can do besides getting to the exit - just pause the game to see what your bonus tasks are.  There are glowing collectibles in some areas, but there are things you won't learn until you've played for a while, so getting to them your first try is going to be extra-hard!  In addition to collectibles, you may be asked to "Complete the level with alien detection zones activated."  If you're wondering what this means (and don't want to figure it out on your own,) here's a spoiler:

Spoiler:
The glowing orange areas are the alien detection zones. Finish the level with one of Lupo's pets in this area to achieve this goal.

A few TIPS to get you started:

You won't be able to get many (or possibly any!) collectibles early in the game.  Seriously, don't even try.  You need to progress and learn more about your environment and enemies before attempting to get these.

The Vermis (caterpillar-looking thing) can't turn around in narrow corridors... He just sucks on the wall. *snicker*  He can also EAT smaller creatures, but he has to be facing them.

Saggitas (Mr. Ball-with-teeth) will pause in his rolling now and then, even when you're close by.  Use this to your advantage!

Osculums (aww, cute little rabbit ears) will attack as soon as you're in their line of sight, regardless of how far away you are!

This game is smart, it's funny, it's interesting and unexpected, it's fun and you'll feel like a frickin' genius every time you pass a hard level.  Most logic puzzles eventually frustrate me enough that I walk away for long periods or go look for a walkthrough.  I WANTED to figure out everything in Lupo by myself, and I did!  It took me 14 hours to finish the story mode with 56% completion. The collectibles add replayability, as does the fact that your actions can have an impact on the level's dialogue, so I'll definitely keep playing.  If you like puzzle games, GET IT.  It's really a lot of fun, and if you're still not convinced, try the demo and see for yourself!
_________________
Never be a prisoner of your past.
It was just a lesson, not a life sentence.

The game has been released, and I updated my review when I finished the story portion of the game~!
_________________
Never be a prisoner of your past.
It was just a lesson, not a life sentence.

I started a wishlist at GOG for Professor Lupo, if anyone is interested:
https://www.gog.com/wishlist/games/professor_lupo_and_his_horrible_pets
_________________
Never be a prisoner of your past.
It was just a lesson, not a life sentence.