Twilight Phenomena 1: The Lodgers of House 13

Twilight Phenomena 1: The Lodgers of House 13

Twilight Phenomena: The Lodgers of House 13
by ERS Games - October, 2012 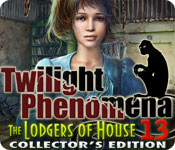 Save yourself and humanity in Twilight Phenomena: The Lodgers of House 13 Collector's Edition!  It’s 1980s England and there's a beautiful 3-floor mansion in the shade of branchy trees. With a friendly landlord and inexpensive rent, most people would envy those who live here. But bloody things are happening inside of this house. Guests are beheaded, and with every new victim humankind is getting closer to meeting a horrible monster. Is there
anyone to prevent this nightmare?

Don't forget, till Fri. Oct 26, use SAVE and
get CE for 9.99
I played demo and bought, could not resist.
bribling

I bought it on sale and have already finished the game but not the extra play. Beautiful graphics as usual for ERS. No HOS!! This is an adventure with unique minis. I enjoyed the game and it took about 4 hours to complete. I skipped one mini because I was getting tired, not because I couldn't do it. When I finished I felt as though it was a short game but at 4 hours it was about average. ERS games have recently changed a great deal. One of the best improvements is a different and broader range of music. Now the hidden object scenes are gone as well. Will this be the way of casual games, fewer to no HOS and more adventure? Time will tell but the traditional HOS are disappearing more and more with each new game.

I loved the colorful art and creative mini games. The Hint system is helpful if you get lost but does not point the direction. The Hint will only tell you to look elsewhere. This is a CE so the Guide is also helpful and contains detailed solutions to puzzles. I used the guide a few times just to find out where to go next. I have had trouble for many years with figuring out where to go in Adventure games. There is no Map unless it is somehow hidden in the Guide (I did not see one). A holographic Cat will help you with some problems as you progress.

The Sale price makes this CE more affordable if you purchase it today. I highly recommend that you try the Demo.
genkicoll

Options include separate sliders for Music, Sound and Voice, Full-screen, Custom Cursor and Maintain Aspect Ratio.  The game actually ran in borderless-windowed mode automatically.  Choice of Casual, Advanced or Hard mode (can be changed at any time).

You jump at the opportunity to live in a beautiful mansion at an incredible price, but it soon becomes apparent that this place is not the bargain you'd hoped for.  Unease quickly becomes alarm, and there is no easy escape from this nightmare!

Despite the storyline, there is really nothing scary about the game.  Sure, you run into some disturbing sights, but somehow it never translates to anything more than, "Huh, that's weird..."

Journal entries are semi-frequent, but short, so it's easy to stay on top of the story as you play.

This title is an adventure-lite, meaning that it's everything you would expect from an IHOG, but without hidden object scenes.  I always expect to do some illogical tasks, but this game takes you from "Yeah, that would never work," to "Are you frickin' kidding me?" I therefore recommend putting aside all thoughts of reality before starting this game ;)

We have a little friend, of sorts, and while I don't want to spoil it by explaining, it's certainly a different take on animal helpers!

There is no MAP, nor any kind of fast-travel, but early on there are only a few locations.  Later you'll have a larger area you can explore, but there's a natural flow that introduces new areas only when you've finished with the current ones, so you won't actually have to do a lot of backtracking.

HINTS will either direct you to an area on the screen, or tell you that there's nothing to do there at the moment.  There is no directional hint.

The Mini-games are - for the most part - very easy.  Most of the puzzles lack any kind of real depth, so are easily-completed.

There are some really pretty graphics in the game, and indeed, perhaps that contributed to the feeling that Lodgers isn't all that creepy.

I like the character design, the voices are pretty good, and the music/sfx were also nice.

The extra chapter picks up right where the main story left off, and is the true ending of the game.  The gameplay remains what you would expect, but I think that I enjoyed it more than the main story.  I didn't time it, but can say that the full game + bonus took me about 4 hours to finish.

This is a pretty undemanding adventure-lite, so I would recommend it to those new to the genre, and/or people who are not looking for a challenge.  I highly suggest putting all logic aside before you start, as you'll enjoy it a lot more that way.
_________________
Never be a prisoner of your past.
It was just a lesson, not a life sentence.