A Plague Tale: Innocence tells the grim story of two siblings fighting together for survival in the darkest hours of History. It sends you on an emotional journey through the 14th century France, with gameplay combining adventure, action and stealth, supported by a compelling story.

Follow the young Amicia and her little brother Hugo, who face the brutality of a ravaged world as they discover their purpose to expose a dark secret.

On the run from the Inquisition's soldiers, surrounded by unstoppable swarms of rats incarnating the Plague, Amicia and Hugo will learn to know and trust each other as they struggle for their lives against all odds. 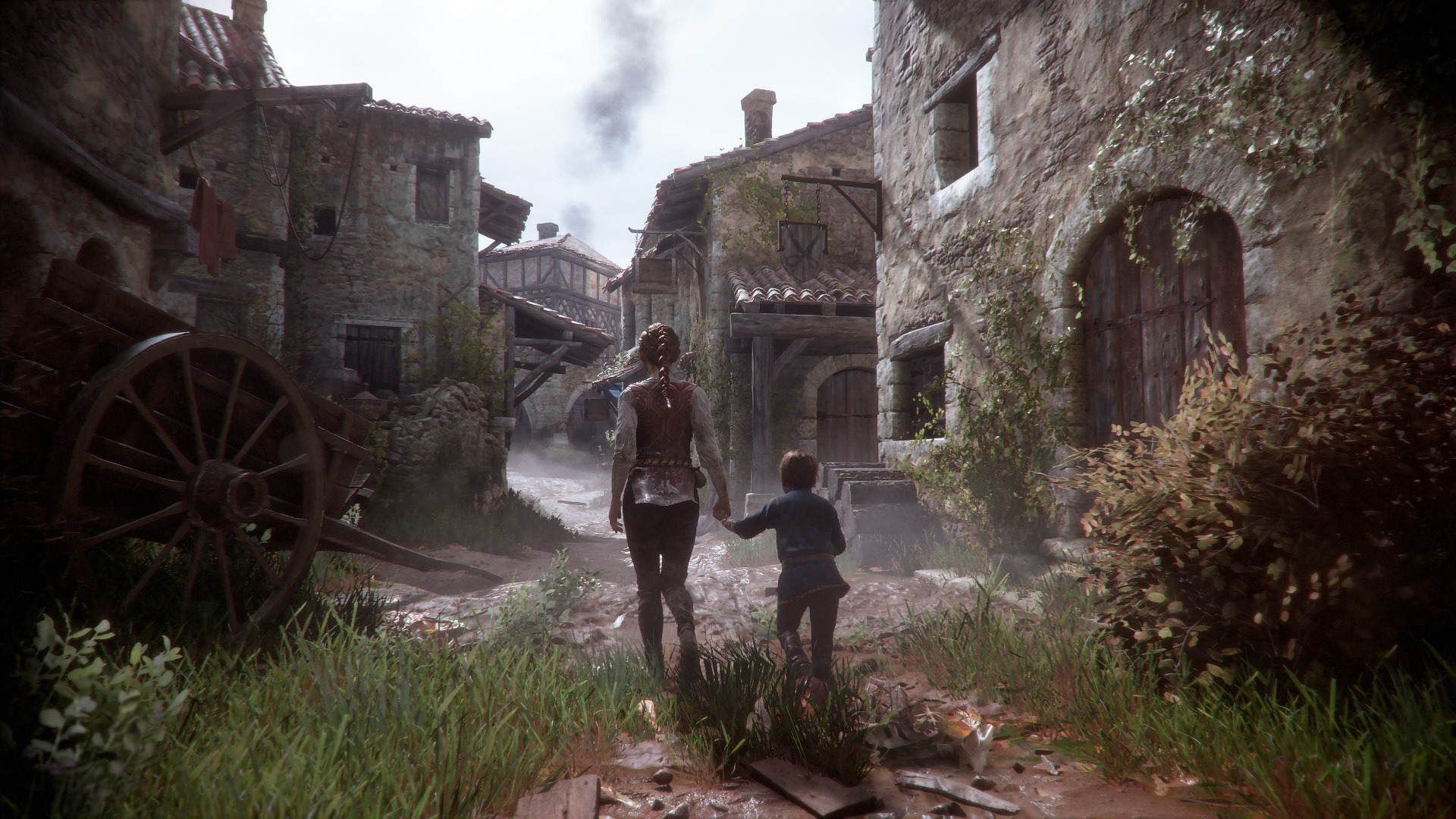 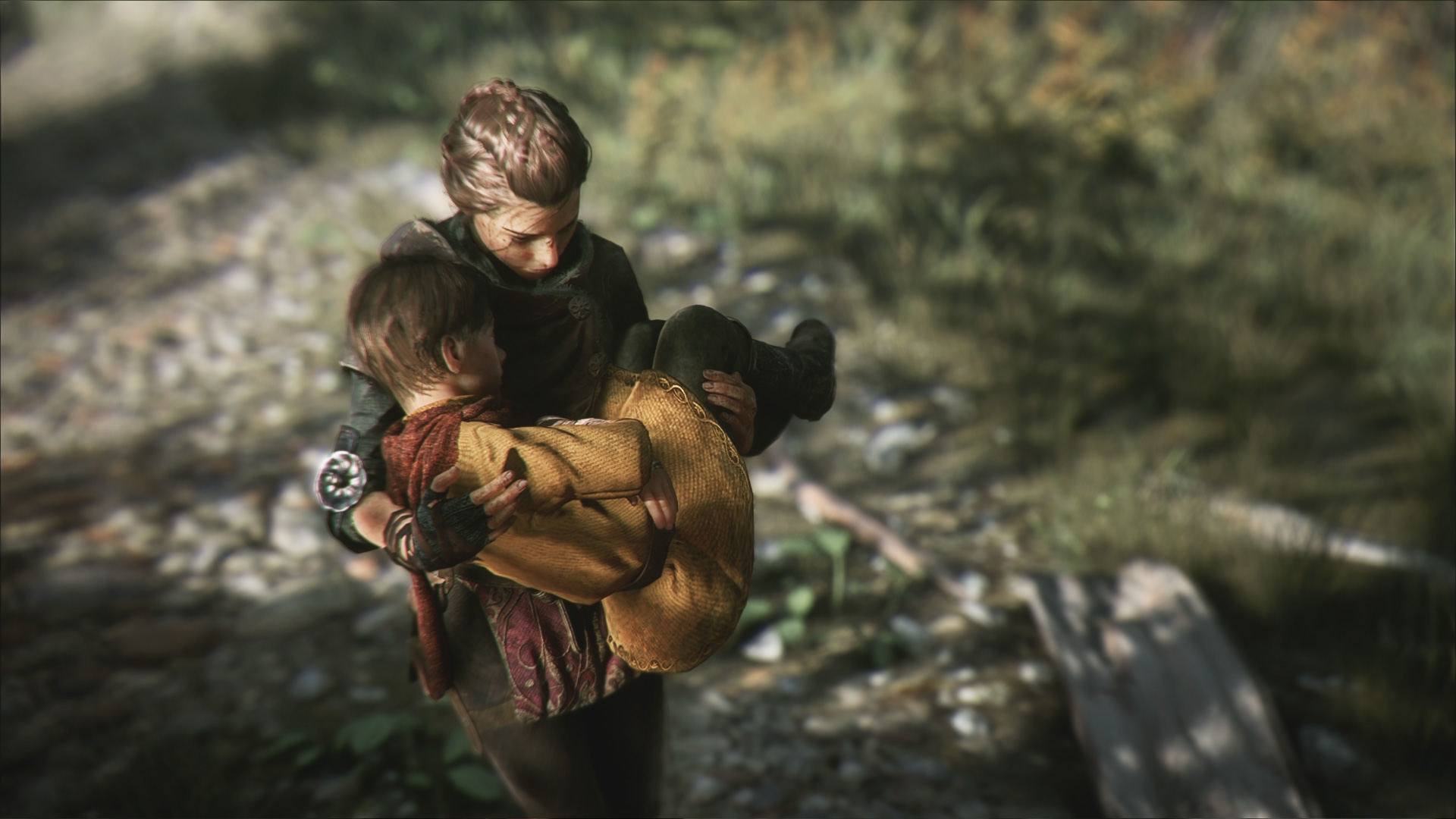 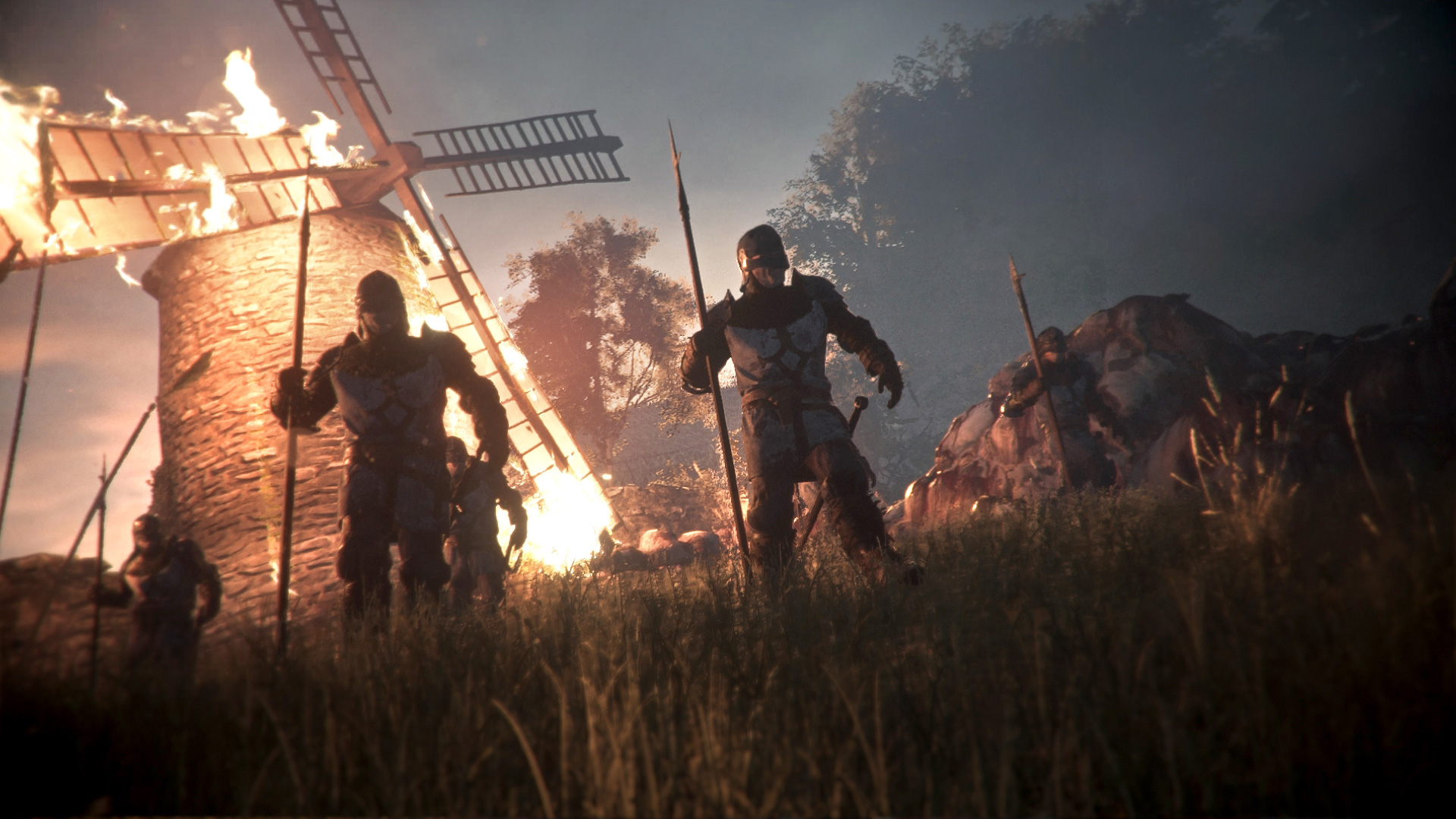 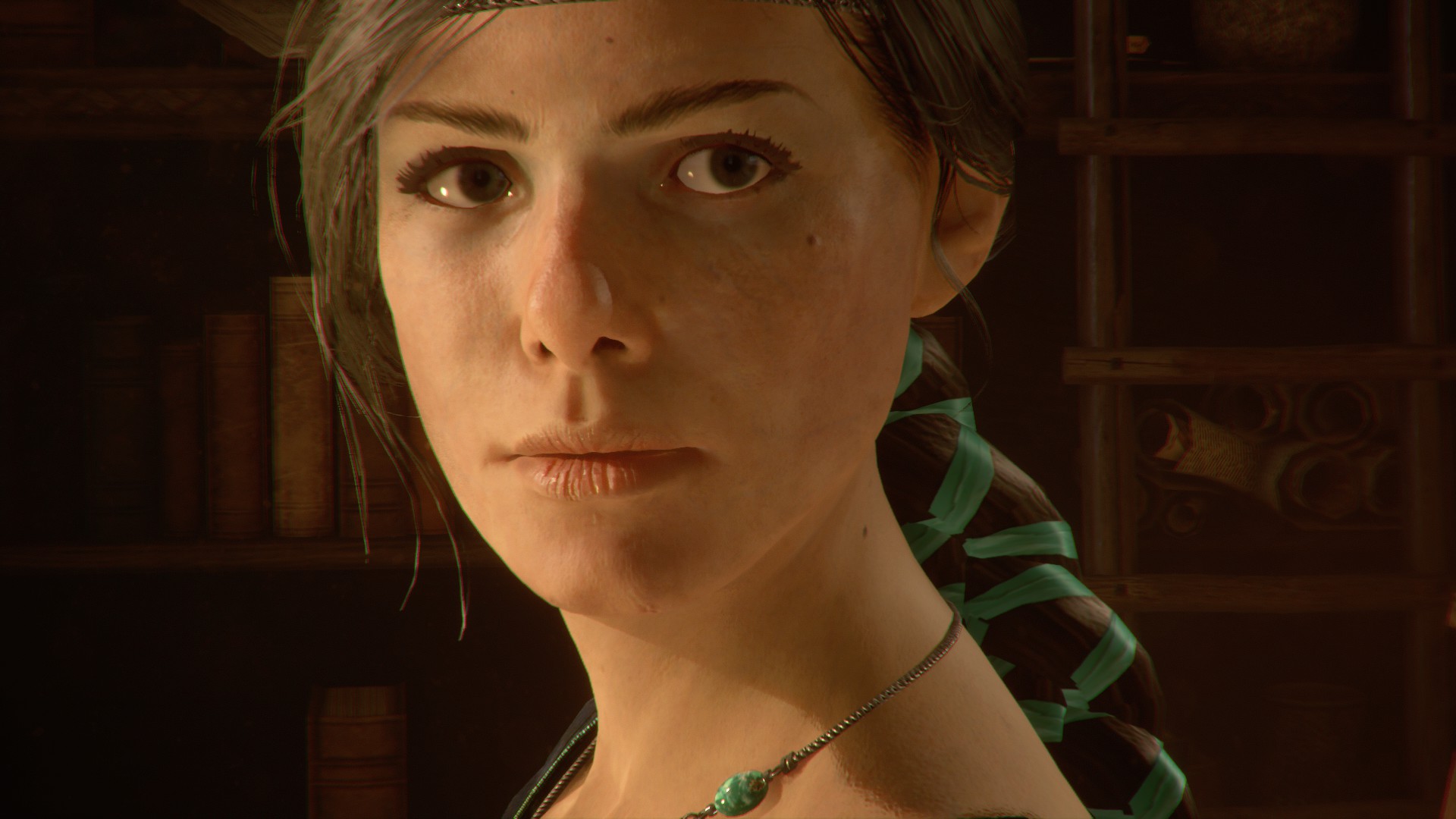 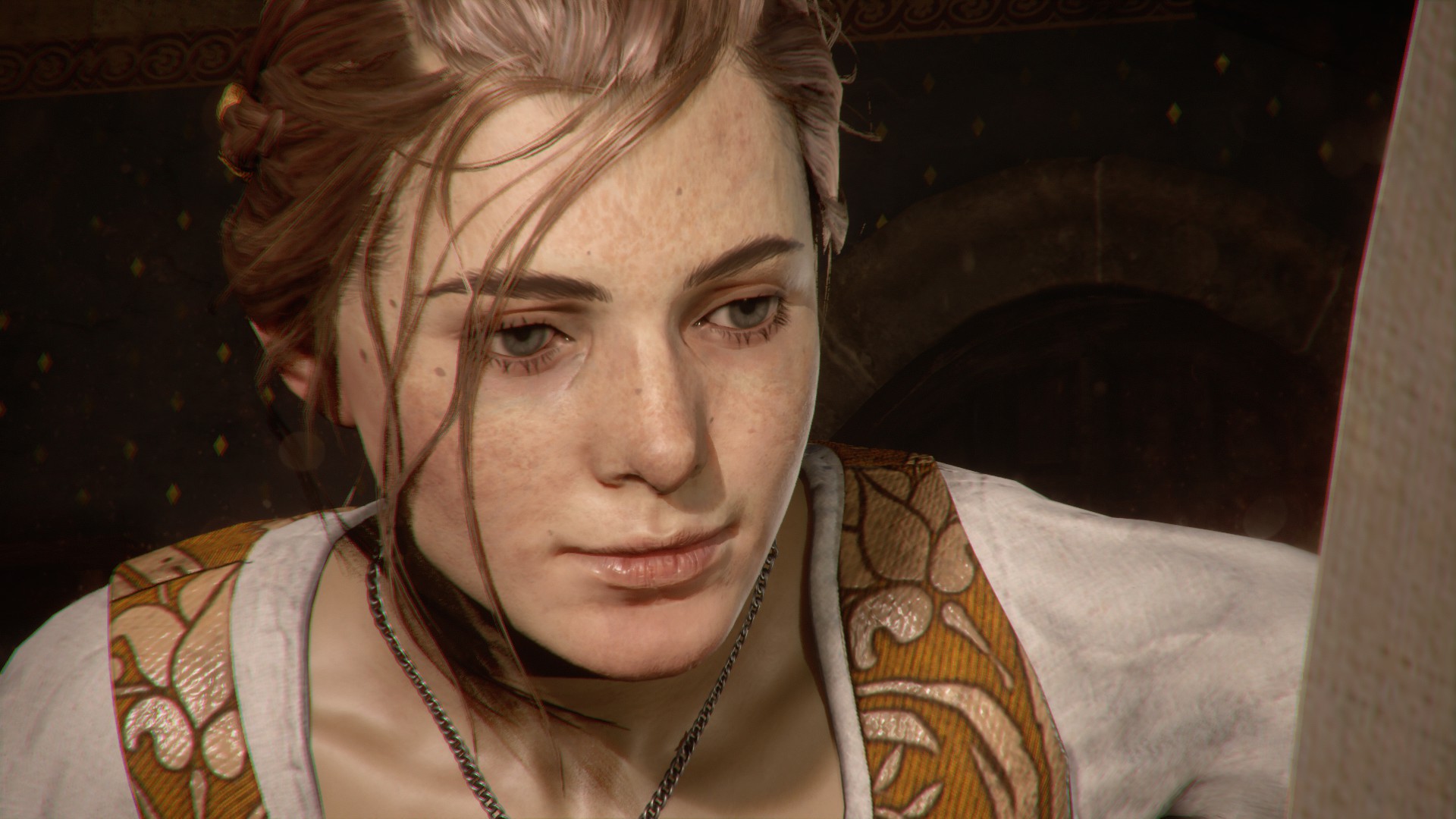 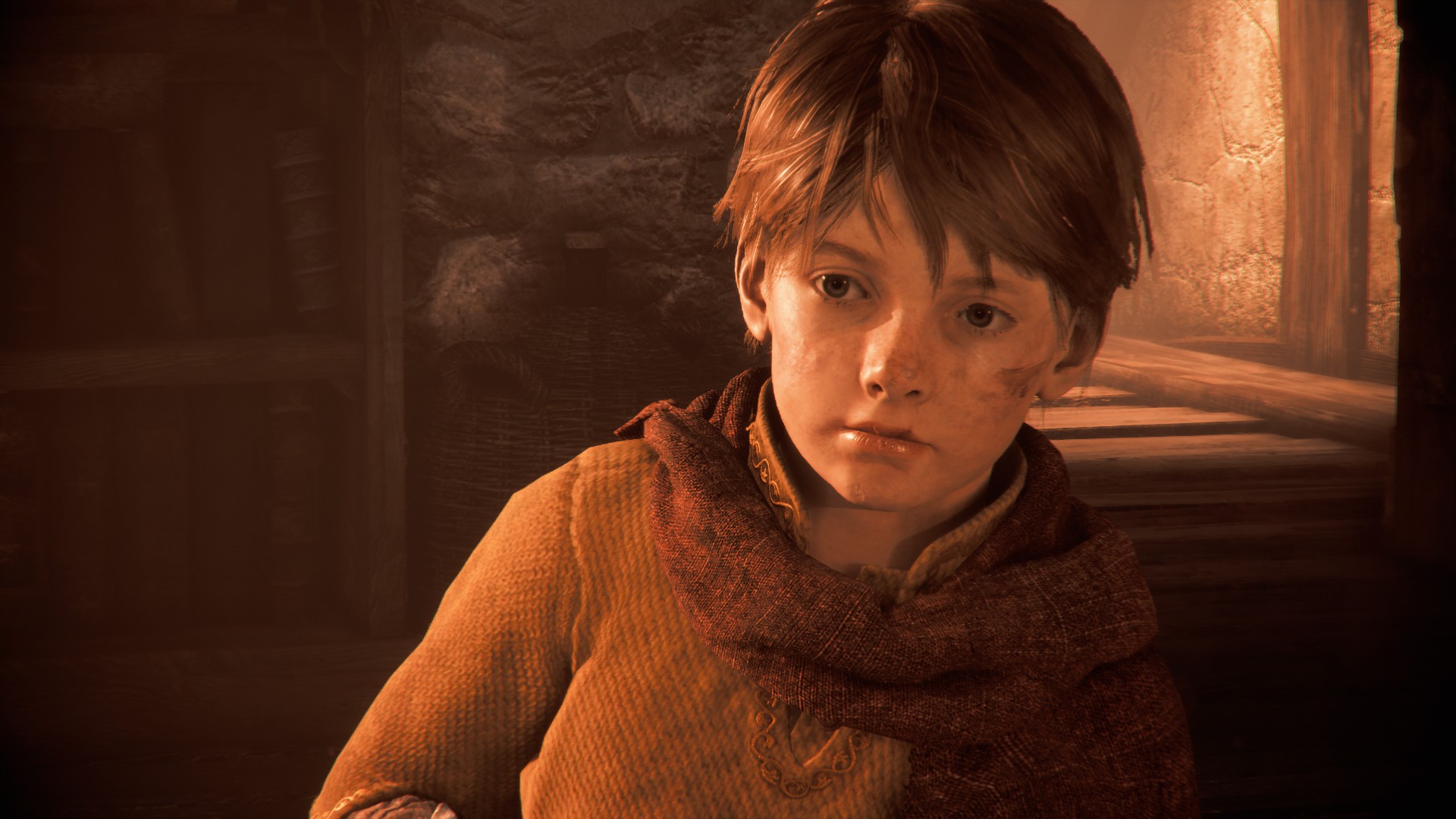 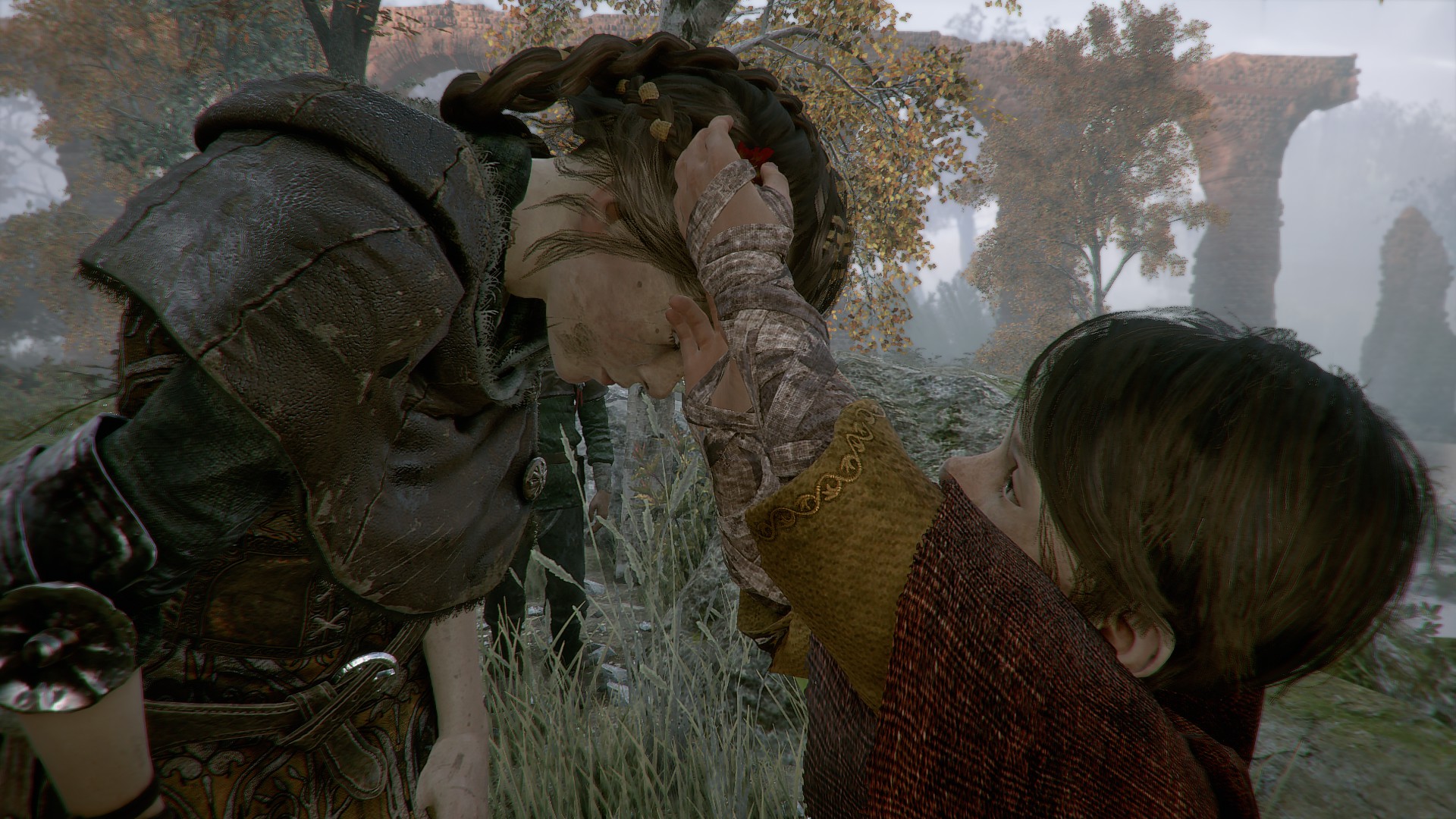 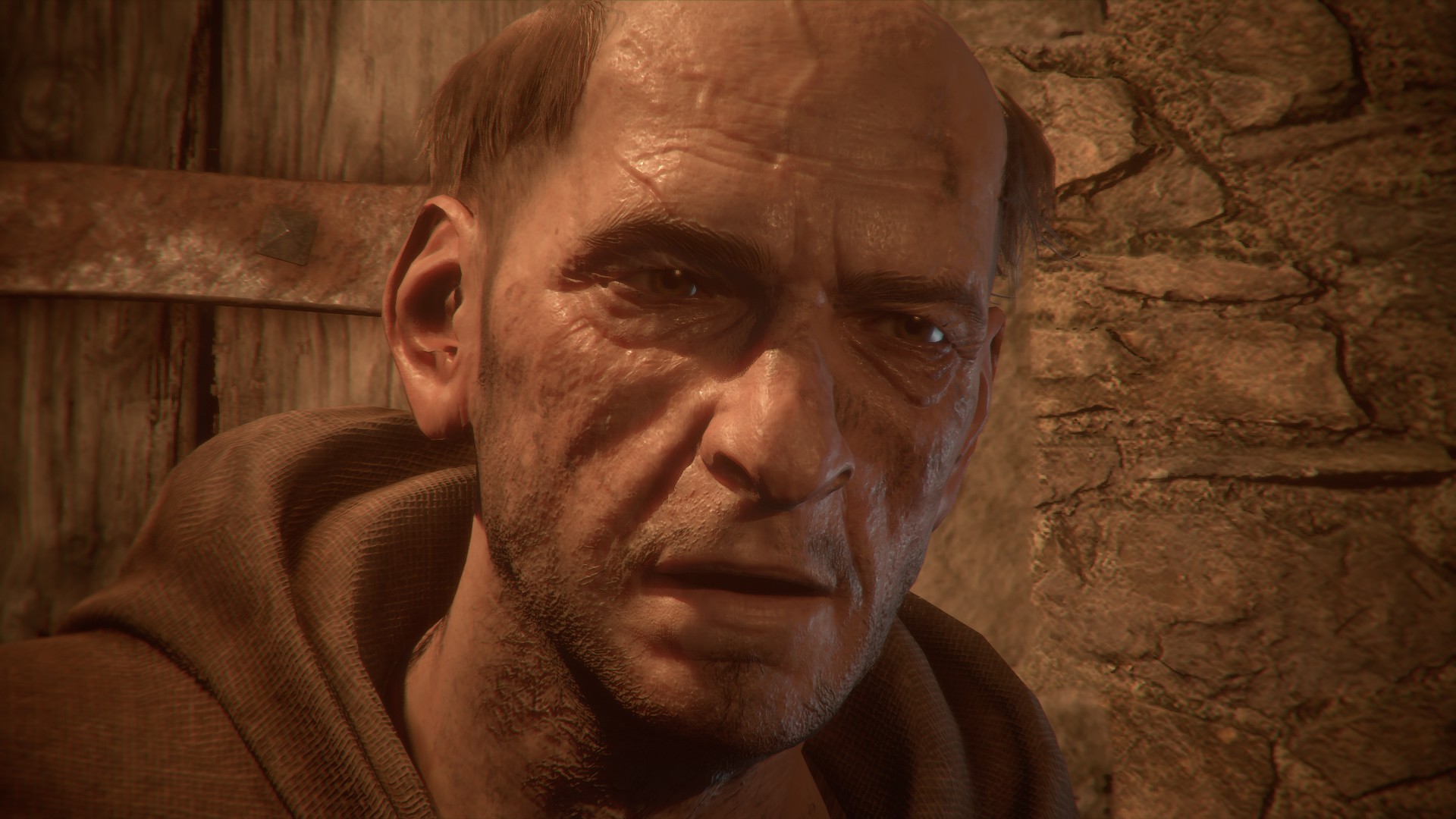 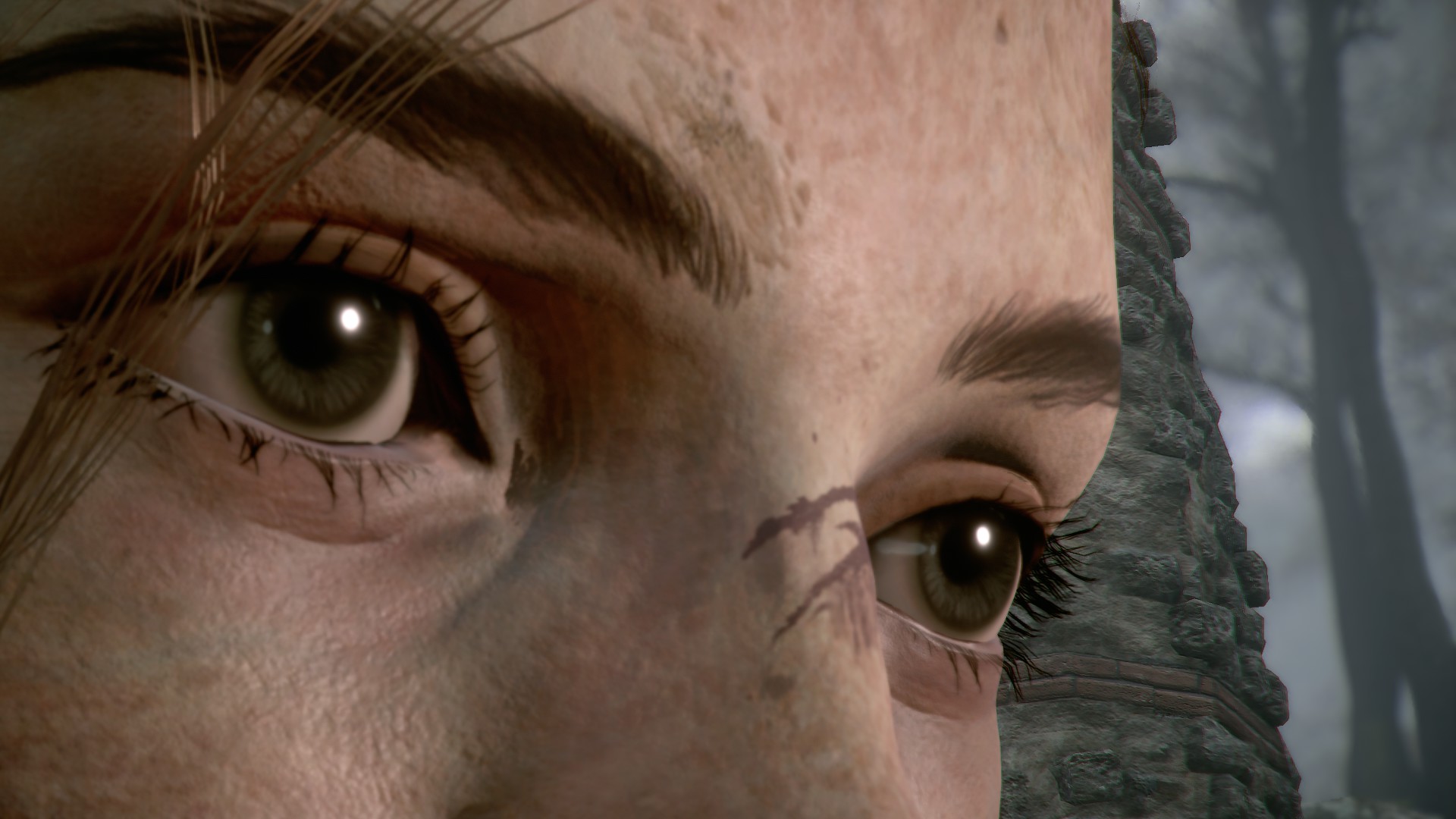 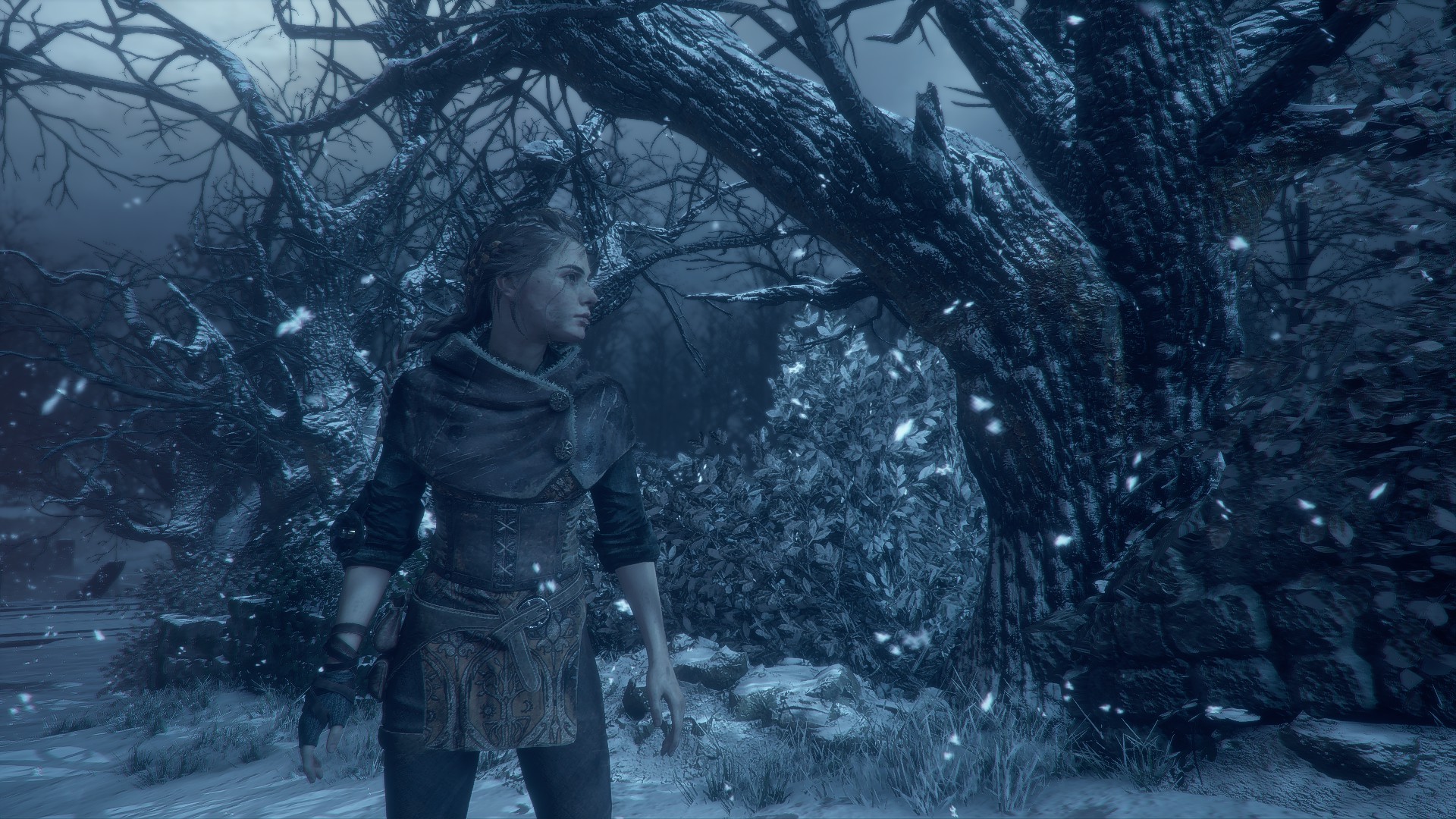 NOTE: I suggest NOT looking up anything on Youtube unless you just have to, as you're very likely going to accidentally run into visuals that will ruin the storyline.  If you need hints, just message me!  I'm happy to help!

There are many options, so I will only list a few:

I HIGHLY recommend going into the Advanced HUD Settings and checking them out.  Most are OFF by default, and if it's your first time playing, you're probably going to want/need to adjust them.

Before you enter the game, you'll need to select your Coat of Arms.  Basically, you're choosing the colors your characters will wear.  This can be changed at any time via the Extras button on the Main Menu.

14th Century France.  Step into one of the darkest times in history, when The Black Plague swept across Europe leaving 25 million people dead in its wake.  We play as Amicia de Rune, a high-spirited young noblewoman with a rich imagination and a longing for adventure.  A peaceful day out with her father is soon shattered by a voracious entity in the woods, and her world is then turned upside down as her home is invaded by soldiers.  Now she and her 5-year-old brother, Hugo, are on the run, and the newly-erupted sickness all around them seems to be the least of their worries... 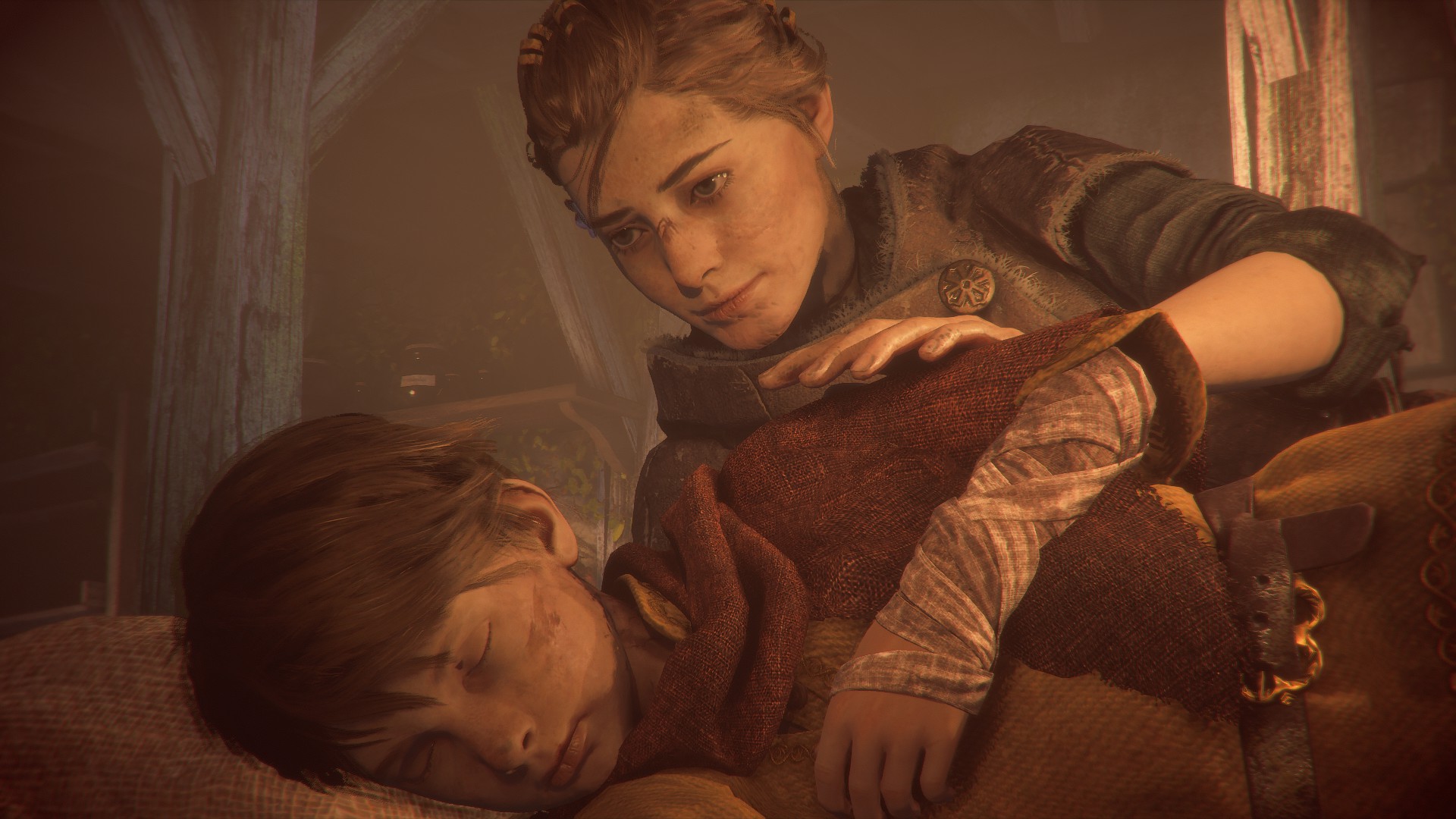 There are historically-accurate items peppered throughout the game, but this is not a historic account by any means. What A Plague Tale gives us is a world of the arcane, filled with terror and the unexplainable.  Only once do we actually see the disease up close and personal, and this allows us some degree of detachment from the horrible reality of the suffering all around us.  There are some incredibly gruesome visuals in the game, to be sure, but I can't really give any additional details without spoilers.

Cutscenes can be skipped by holding down the appropriate button (on my Xbox 360 controller it was the B button) -- useful when you die right after a long dialogue.

There are three types of collectibles to keep an eye out for during the game.  Although I am usually a big fan of hidden content, this tale is so compelling that I didn't want to break the immersion by running around just to find the extras.  They DO expand upon the story and overall feeling of the time frame, but I chose to focus on the story for my first playthrough.  Luckily, you can easily go back to get items or achievements that you missed via the Chapter Selection button on the main menu.  Not only that, but when you use this function, it shows your collectible status for each chapter!  Nice!

Early on you're mostly running, sneaking and occasionally using your slingshot.  Just when I was thinking that was all there was to the gameplay, everything changed.  Now there were puzzles, different kinds of ammo, less running and more overall finesse, adding an extra layer of depth to everything we needed to do.

The game is not without its flaws.  There is no map, nor indicator of which way you should be going, and although it doesn't happen often, this can result in getting turned about and heading the wrong way.  I did find some collectibles that I'd missed when I had originally passed through, so at least there was a plus to getting lost. lol~

At times we need to move around carts or large boxes, and the movement was very hard to get used to for me.  Pro tip: When moving large items, push or pull ONLY, and adjust the CAMERA to change directions! 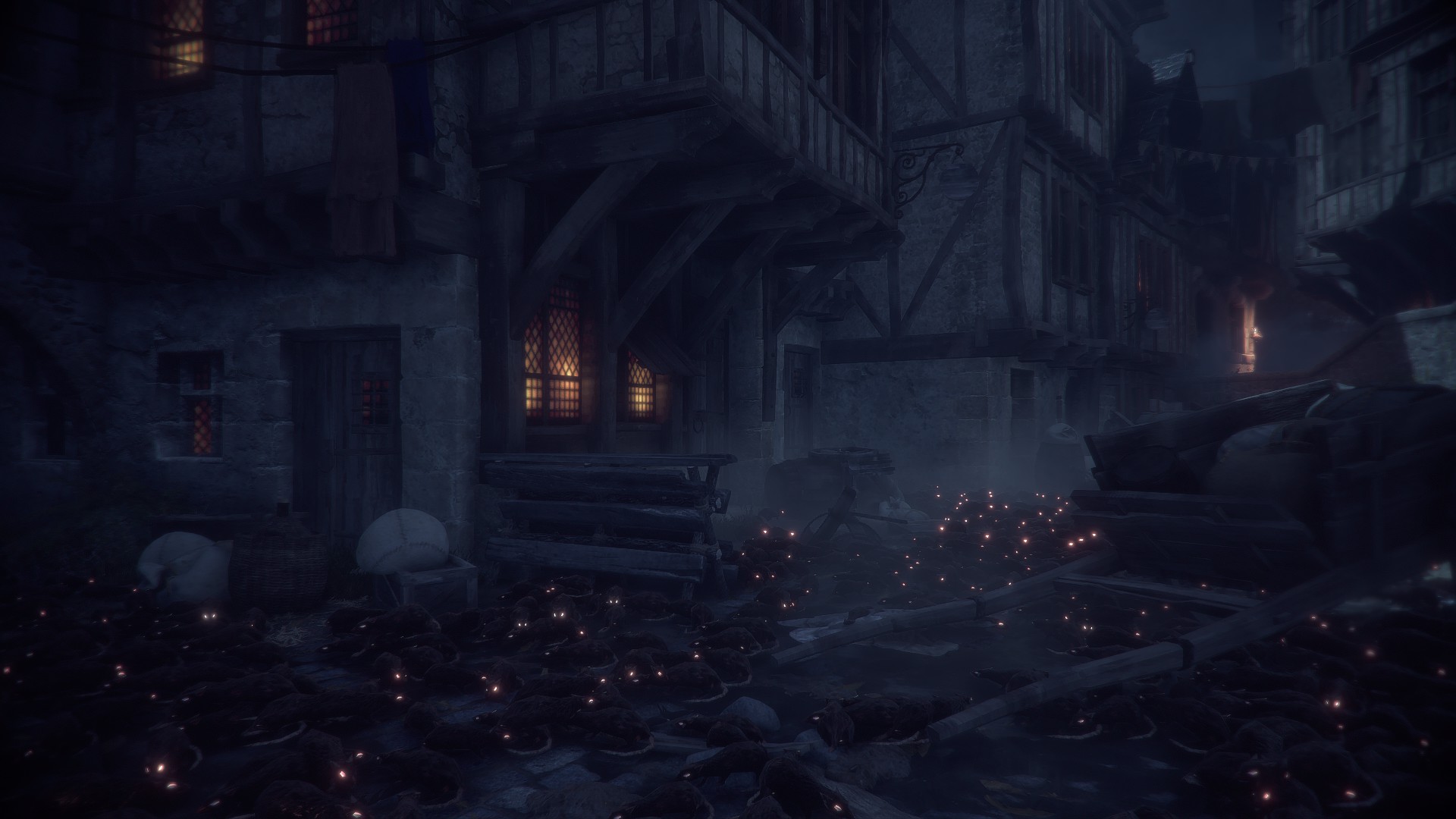 They have armor, shields and mighty weapons to crush, impale and otherwise snuff out your life in an instant.  You have a slingshot. I'm sure that you can see a bit of an imbalance here, but there is much more to combat than it seems at first glance, and you do have the ability to dodge (not covered in the tutorial, by the way.)

I mentioned earlier that you will end up with different kinds of ammo, and you'll sometimes have to switch between them quickly in order to take out your enemies.  This can be nerve-wracking, so learning what each type does before you go into battle is going to be a huge help to you.

These are only a few of the possibilities, but telling you more would entail spoilers.

I'm sure that you can see the possibilities here, but there's another layer to your battles, and that is stealth and wit.  Planning out your moves, distraction techniques and of course getting your enemies off by themselves are all going to be beneficial to your health. ;)

I believe that there is a fail-safe built into the game to make it impossible for you to be without what you need to continue, but it can't hurt to grab every single ingredient that you can get your hands on - you'll need them for your ammo, and crafting whilst running for your life is beyond stressful!

Speaking of which, I'm not going to lie -- The battles start out easy, but they become brutal fights for survival later in the game.  I actually got to one battle that was so furiously difficult that I had to turn off the game for a while.  In retrospect it's because I was making things WAY harder than they needed to be by not utilizing my tools to the best of their ability, as well as something else which I didn't realize at the time, but can't mention because it's a BIG spoiler.  Going back and replaying one of the harder battles only took me two tries instead of over a dozen, so tactics can make a huge impact!

Luckily, there are multiple save points in a battle, saving me from literally pulling out my hair and from having a stroke from a blood pressure spike! lol~ I have to say that Aim-assist was my best friend in this game - I don't know if I could have completed the game without it!

The music that plays whilst the game is loading is a testament of things to come; to the epic journey you are about to embark upon.  Every aspect of the game is the same quality as that intro music: beautiful and haunting and of the highest production values.  The voice acting is superb, as is every sound effect, sigh of the wind and musical note that you will hear.

The visuals are absolutely stunning, completely enveloping you in this terrible but beautiful world of strife, pain and love. 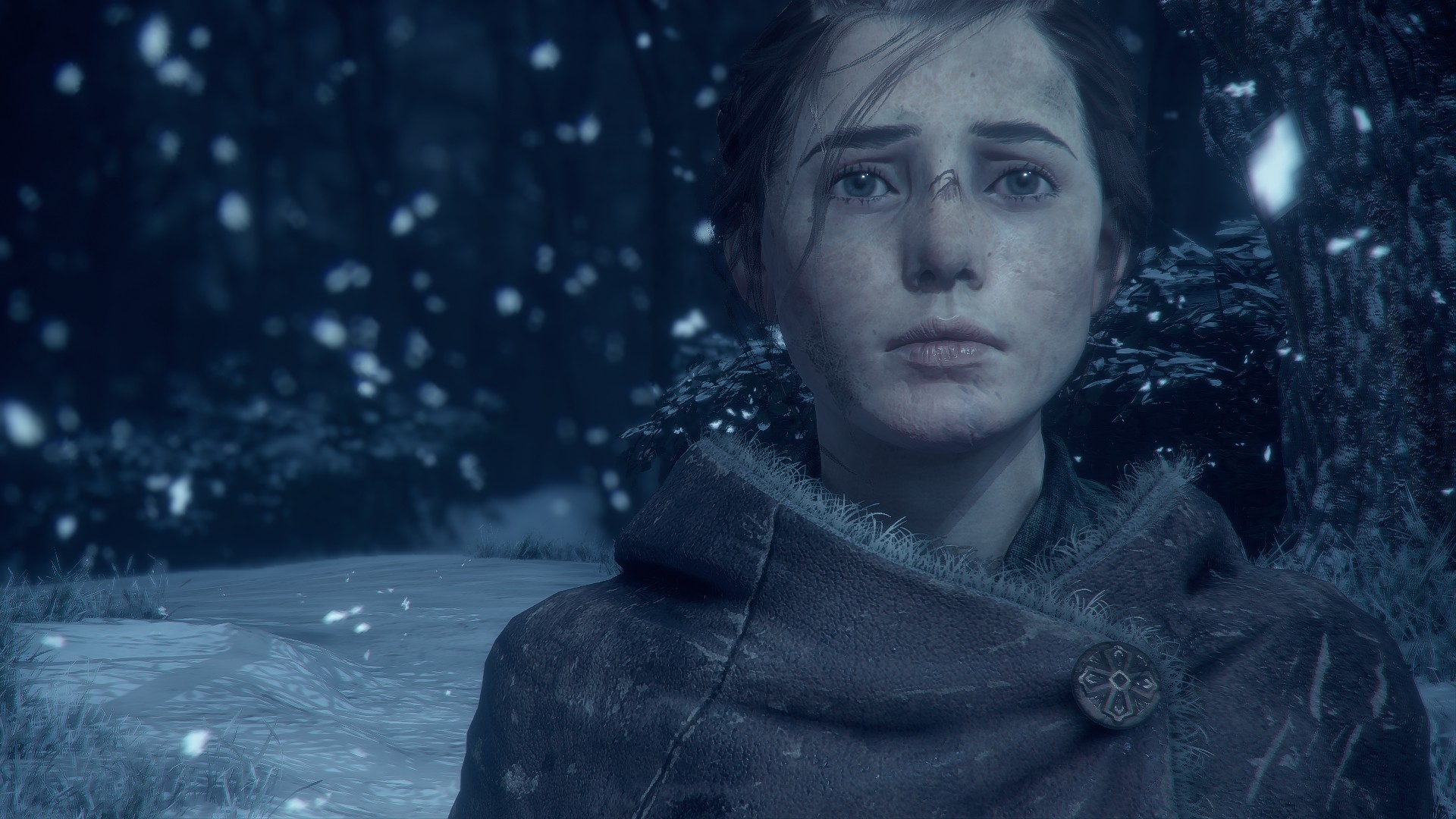 I was overjoyed to learn that there is an in-game Photo Mode, which allows you to pause, move the camera around, get the very best angle and snap amazing shots to your heart's content.  Although lacking some of the photo tools that I enjoy, there are still adjustments for focus, contrast, brightness and more.

The Epilogue is very short.  There are no collectibles, but it does give us just a little bit of extra closure.  Although I don't want to wish any more misfortune on our characters, this game was so amazing that I'd love to find out that a second game is in the works.

A Plague Tale: Innocence has the most compelling, the most riveting story that I've ever experienced in a game.  It's not just the writing... It's also the environmental graphics, the voice overs and the gameplay, all merging into a world that feels tangible and alive!  Buy it now, play it NOW... Just be sure that you have some time to devote to it before you start... You won't be able to tear yourself away!
_________________
Never be a prisoner of your past.
It was just a lesson, not a life sentence.