When Penny dies under mysterious circumstances, she wakes up and finds herself filling in for DEATH HIMSELF! This temp job comes with a new power - the ability to flip between the worlds of the living and the dead! In this puzzling platformer, she’ll need that - and her wits - if she ever hopes to unravel the mystery of her demise.

Leap between platforms, solve puzzles and help the dead rest in peace by possessing the living and making them dance around at your merest whim in this comedy adventure game by Zoink Games, with writing by the Eisner-award winning Ryan North.

- Flip between worlds: Move swiftly between the living and the dead.
- Possess the living: Control their limbs and read their minds to solve puzzles.
- Play as Death: You're just a temp, but the ultimate power of life and death is in your hands.
- Dive into a rich, colorful world: Explore vivid environments in a pop-up book style and make your way through a completely original storyline! 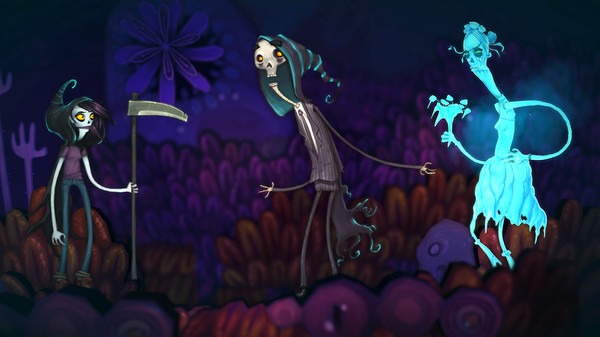 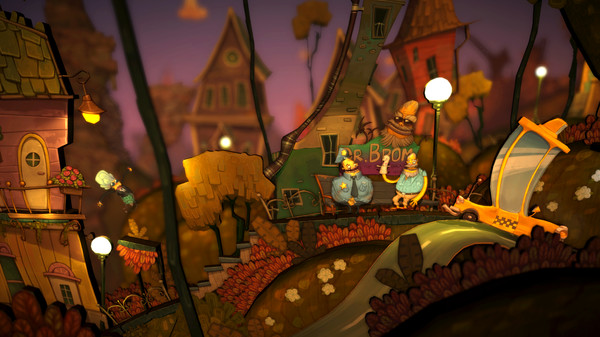 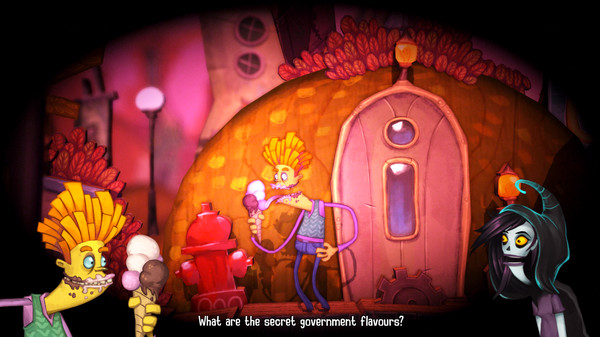 I loved this dev's game Stick it to the Man! , so I had high hopes for this game.  I was not disappointed!

Options include separate sliders for SFX, Music and Voices, Subtitles and Language.  Can choose to play Windowed before you enter the game.

Penny is just your regular girl... If by regular you mean quirky, enthusiastic and, well... dead!  When Penny is mistaken for the temp that Death ordered, she quickly finds herself wielding his scythe while he flits off for a much-needed vacation.  Now Penny not only needs to figure out how she died, but is now stuck helping out the living and the dead! 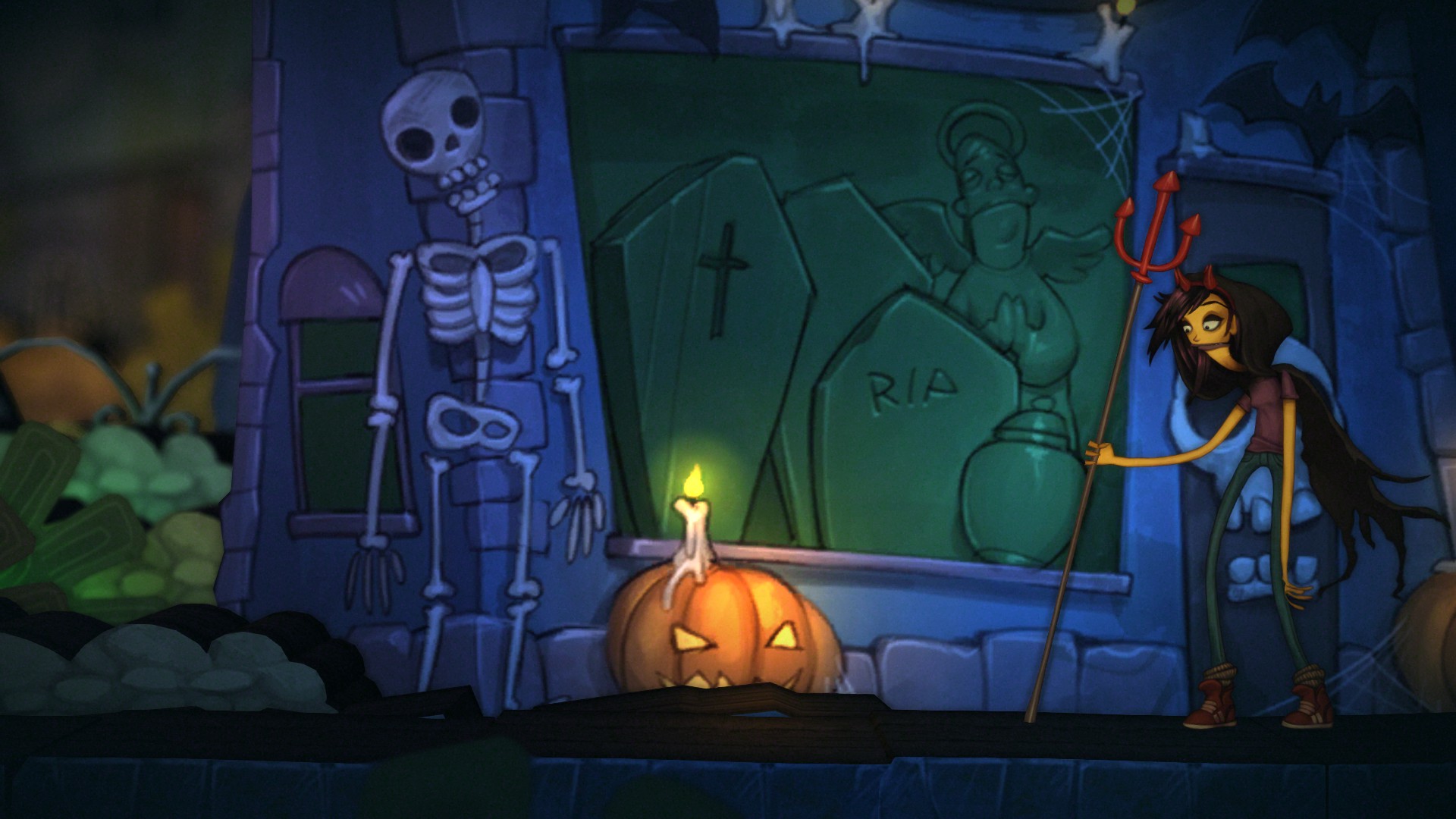 There is no Journal, but never fear!  The narrator is here!  The story is broken into 7 chapters, but you don't have to wait for the auto-save between chapters.  Leave at any time, and the narrator will get you caught up when you come back in-game.

The story itself is witty and fun, silly and funny and just all around delightful.  You can skip the story bits, but what fun would that be?

This isn't a platformer.  It's an adventure that has some platforming in it.  Yes, you're going to have to move quickly in a couple of places, but nothing too frenetic.  The focus is more on the story and progressing the game by completing tasks and puzzles.

The game is called "Flipping Death" because that's exactly what we're doing:  Flipping between the world we know and the world of the dead. The premise of moving back and forth between realities is nothing new, and yet here it feels so inventive, so different than any other game I've ever played.  Here's how it works:

From the spirit world we can see the glowing forms of the living. Once you collect enough ghost critters, you can possess their bodies and roam around in the real world!  Each character has their own skill, so to speak, such as chomping, poking, chopping... You get the idea.  Not only that, but you can read the minds of those you've possessed, adding some extra humor and depth to the characters. 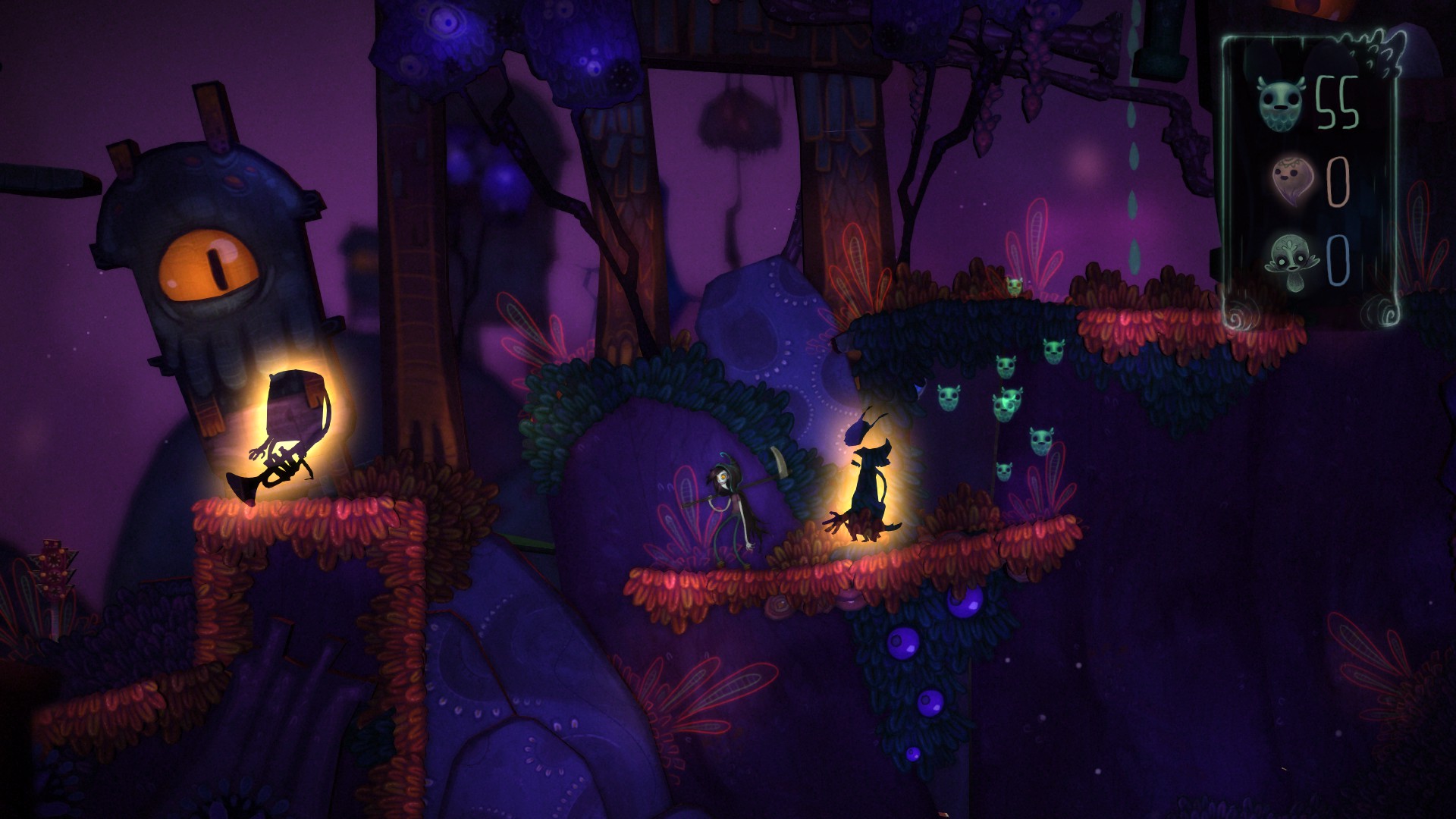 Death's scythe will help you get around quickly, and not just because it has a jump-teleport function.  It is also a handy MAP that will allow you to teleport to the location of any person whom you've previously possessed.  It'll flip you back to the dead side of things, but you can re-possess without having to "pay" with critters again.

Movement and "flipping" is intuitive, but I kind of felt at a loss about what I was supposed to be doing at first.  Do yourself a favor and stick with it!  Luckily, there are HINTS available from the pause menu!  Clicking on a numbered hint will give you a picture of what you should be doing next.

It wouldn't be much of a game if you didn't have some goals, and there are plenty of to be had.  There are optional quests that you can see by hitting the pause button:  Top left for goals to complete the level, bottom right for optional goals.  Completing an optional quest will not only net you extra Steam achievements, but will also unlock collectible ghost cards.

Missed some ghost cards?  Replay a chapter!  There is a Chapter Select from the main menu that will allow you to go back and try again.

The graphics are a charming cardboard cutout/pop-up book style that works beautifully with the "flipping" theme, and they're quite beautiful to boot! 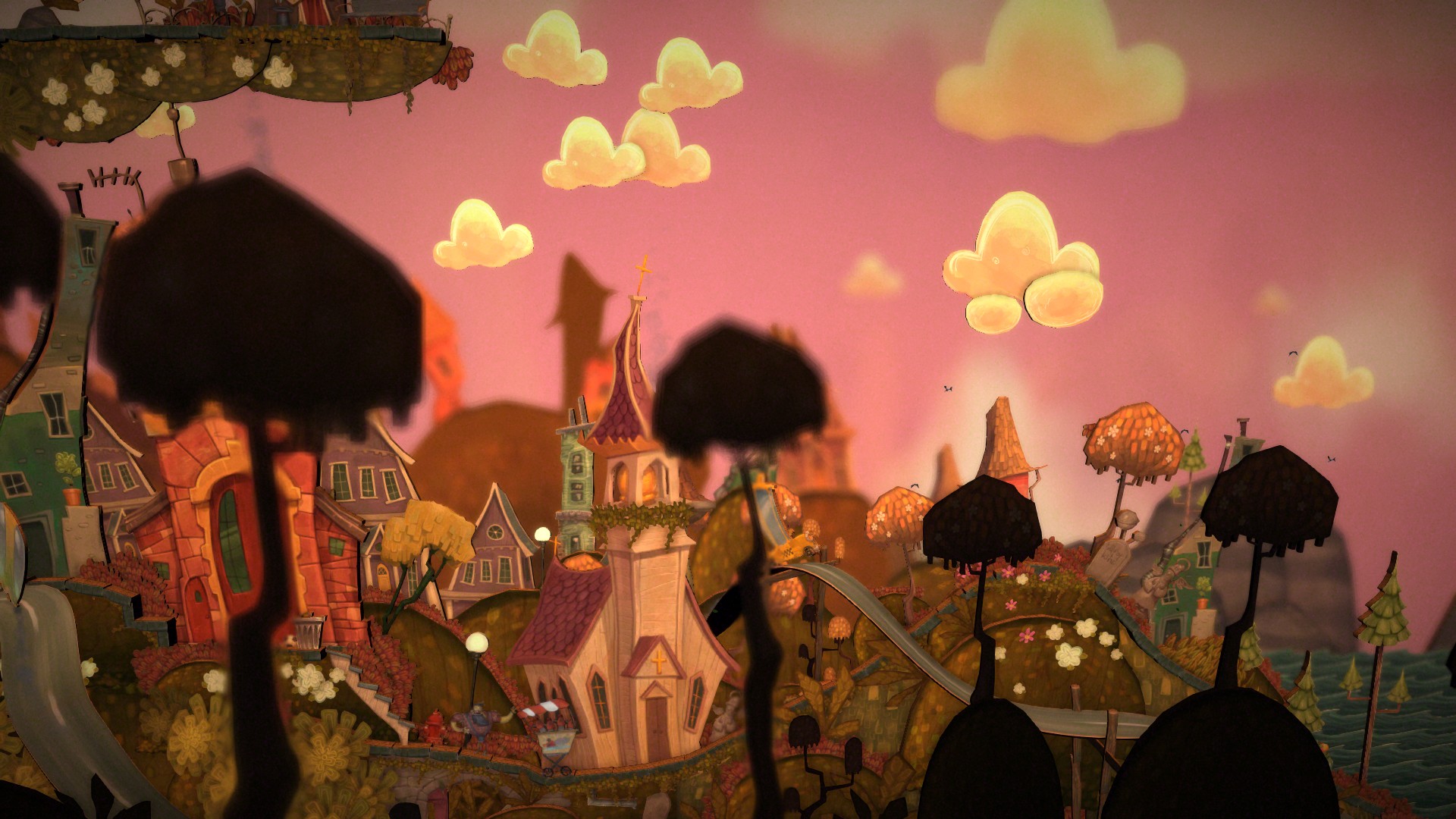 The voiceovers are fantastic! They couldn't be more perfectly-suited to the story, the graphics and the overall theme of the game.  Same for the sound effects and music, just perfect!

Although it's obvious that these devs also made Stick it to the Man!, they managed to make Flipping Death feel completely fresh and inventive.  A game like no other.  It's smart and funny, entertaining and interesting and just plain fun.  The writing is stellar, the voiceovers are great and the graphics perfectly-suited to the game.  In a word?  Delightful!  Definitely a must-play!
_________________
Never be a prisoner of your past.
It was just a lesson, not a life sentence.