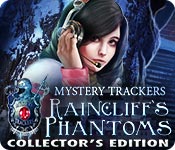 Now you see us… now you don’t. It should have been a lighthearted human interest story, but what Emilie White reported on in this abandoned town scared her witless – and now she’s vanished. Nobody can say what happened to her, and only a few like you know the stories of invisible people living there are true... Return to Raincliff, where what you see isn’t always what you get.

No significant differences from the beta.

FIRST IMPRESSIONS
The best game of one of the very best series, the original Mystery Trackers Raincliff was a brilliantly conceived and produced game. One of the best games ever produced in fact. So it is delightful to have the opportunity to return to a place of such vivid memories. And the Raincliff of today is just as exciting, involving, and don’t forget *cold* as the previous one. And a good bit creepier.

SIGHTS & SOUNDS
This is authentically Raincliff. You can see it all around you, the same taste of the town from the first game. The graphics, at least at the start, are a little cartoony, but otherwise, the visuals are clear and clean and cold. Yes, I do keep coming back to that, don’t I? But it was one of the qualities of the original game that, among dozens of icy games, made it a stand out. And this follows faithfully.

And nobody can criticise the marvellous way in which this game makes invisibility visible. You have a gamma slider for a perfect fit, as well.

The sounds add to the atmosphere. The bitter wind whines at you the whole time you’re outdoors. There are all sorts of weird and creepy sounds in the background, and the voices of the invisible chatting as if it was you who couldn’t be seen. Splendid. Some of the sound effects will catch you off your guard, too, and give you nasty shock. The music was sufficiently unnoticeable to allow the other sound effects to dominate. All have sliders to suit your taste.

WHAT’S HAPPENING?
An increase in supernatural activity, a missing reporter, something is amiss in Raincliff again. Early signs are that she has been kidnapped, or worse, and the videos she leaves behind her are very disturbing. Evidence clearly points to an unknown number of invisible individuals living in the city, and they are not pleased to see you. But there does seem to be one almost angelic looking person prepared to help. Who is he/she? For fans of agent Elf, he is still with us.

GAMEPLAY
Raincliff balances HOPs with other mini-games and adventure play well. It is a bit more challenging than most games, but not beyond the logical powers of most players. The adventure component is fairly obvious without being boring, and there is a hint button that takes you to the active area, and an interactive jump map. There is no journal, just a video camera so you can replay the journalist’s tapes.

CE BLING!
As well as quite different wallpapers (8) and concept art (8), music and the SG, there is an Achievements room with beautiful masks, and the most amazingly sweet music! There are also collectible Mr Toad’s, (a feature from the original game and one of my favourite collectibles ever) each decked out to represent a different country.

There is also a frost mode. This is a neat idea. A thermometer keeps track of how cold you are, which drops when you are outside. When it gets low enough, you must find a morphing object that will keep you warm, such as a pair of gloves that morphs to a book. There is an achievement for playing in this mode, but you can turn it off within the game.

COMBINED IMPACT
I don’t know whether it’s the frigid atmosphere of Raincliff, or the eerie feeling of being watched, but on a pleasant summer evening in Oz, I had the shivers playing this game. Either way, you can’t ask for a better demonstration of the success of this game.