The Agency Of Anomalies: Mind Invasion
by Orneon - December, 2013 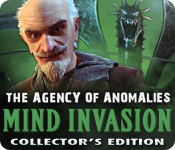 All they wanted was a cure, but what they got was terror! Return once again as a detective for the Agency of Anomalies. This time you're called to a health spa in the Alps, where an evil professor has something terrible in mind for his unwitting patients.

Re: The Agency Of Anomalies 4: Mind Invasion

FIRST IMPRESSIONS
I’m a big fan of this series, which started out so stark and creepy and with great imagination. The second and third games were both great games too, but they never quite matched the first in creepy. This one is back with an atmosphere that makes my skin crawl in parts. I know a lot of players who will like this breath of fresh air, after so many beautiful fantasy games this year.

SIGHTS & SOUNDS
This does not mean that the artwork is any less than the best of those games. It may be depicting disturbing images, but it does so in splendid colours and animation. Voiceovers are very good, with no attempt to lip synch. The sounds are the expected creepy, and the music is pleasantly non-descript.

WHAT’S HAPPENING
You come to the aid of a wife whose husband appears to be held captive at an asylum hospital, having gone there initially of his own free choice. Your arrival is delayed a little by the unavoidable need to fix the sky car mid-flight! Once on the ground again, you are greeted to the spa by Dr Swen, member of the Seeking Brotherhood, who gives you a quick reprise of the stories in the other games and brings you up to date on their machinations. Then you are sedated and wake up trapped inside your very own mind! Luckily you escape, and now you must free the other patients by entering their minds are curing them. Love these mind games!

MAKING PROGRESS
This is primarily a HOP adventure, and HOPs vastly outnumber the other games and puzzles. There are 5 types of HOP so far:

At least some of these scenes are revisited, but not necessarily using the same search method. The puzzles are rare but what I saw I really liked, for example, the 4 part maze, that was very different in style.

The entire hour was needed to finish the demo, which contained the first two chapters. This is my only real concern – the SG shows only 4 chapters plus the Bonus.

CE BLING!
No wallpapers!! Oh no!!! Okay, overreaction, but I do like them. Instead we have Concept Art, Replayable Mini-games, Achievements (lots) and Collectible Canes (31). As well as the SG and bonus chapter of course. NO PETS THOUGH!

FINAL VERDICT
I absolutely love the imaginative approach in this game. Inside others’ mind are eerie and creepy images and concepts at least on a par of all the so-called cute and beautiful games. And the game play is also quite different and original.

Update: Based On Completed Game

The puzzles are very new and very clever and very hard. I had to skip more than half of them. I’m not good with puzzles, but even I can normally do better than that. Some of them are really fun, and I hope we’ll see more of them. Others were innovative and exciting new concepts about familiar games, so that they are a whole new type of challenge.

COMBINED IMPACT
This is an exciting and imaginative game, in the manner of the others of this series, but I found myself frustrated about those puzzles. I may even upgrade to the CE, just to get the help I need to solve them, but in the end, I am not so enthusiastic about this one as I was about the others.