PuppetShow 2: Souls of the Innocent

PuppetShow 2: Souls of the Innocent

PuppetShow: Souls of the Innocent
by ERS Game Studios 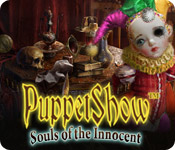 Return to the terrifying PuppetShow in this spooky sequel! A  young girl has been asleep for over two days, and the local doctors are  at a loss. The townspeople believe her condition to be a curse emanating  from a dark magician’s castle in the mountains, so it’s up to you to  track down the cause of the curse and save the Souls of the Innocent!  Dive into in this dark and mysterious Hidden Object game.

I had to have this game.

HAD to! I tried to resist, I really did! I didn't even demo it, for I knew I'd want it.

It was no use, I clicked the BUY button, and that was the end for me

This is the first game I have ever bought for myself without demoing it first! And it's a Collector's Edition, so it was really a gamble!

First off, let me say that I positively loved Joyville. I was slightly
disappointed to see that they changed the art style a bit for Souls of
the Innocent, but despite the difference, the two games have the same feel
to them. The game mechanics work the same way as in the first one, but
this game is much longer. Adventure lovers rejoice, for there are many
LFA aspects to this game. Those of you who enjoy IHOGs, but aren't
entirely comfortable with the having to remember things and come back to
them later, never fear! The built-in strategy guide is easy to access
and straight to the point.

The artwork, as you can see from the
screens, is gorgeous. This game has come closer to RTR than any other
game I've tried on Big Fish, both in graphics and game play. Nice
bright colors that belie the sinister plot, this game was nevertheless
not as psychologically intense as the first one was for me. More
sinister in some ways, and somehow less so, too. Anyone who has played
both games could probably see how that's possible (won't give it away
here!)

The mini-games are skippable, and the hints recharge
without limits. You have two options, one for beginners (with sparkles
and faster hints) and one for the advanced players. Always nice to have
a choice :thumb:

As for the extras, there is concept art - some of which is quite beautiful; wallpapers - also quite lovely; the built in strategy guide - very handy and easy to access; a screen saver and plus bonus game play!

The bonus play is not just extra hidden object scenes. You move around, get lost, play mini-games and everything else you'd do in normal-play. The extra story is interesting and doesn't seem like it was just "slapped together" as an add-on.

I loved the first PuppetShow, and was thrilled to have this second edition

This is the second game in the PuppetShow series, and if you haven’t played the first one Joyville, I recommend it. But it is not important to the STORY.

As a detective, you are called to a small town where a girl has laid inexplicably asleep for 2 days. Disturbingly, a nasty spider puppet is identified. Pretty soon, your investigation reveals the disturbing fact that many more children are in the same condition.

Locals blame an evil wizard who lives in a castle nearby. So, of course, that is where we must go to solve the mystery.

One unique feature of the series is the location and structure of the tool bar. It is located in the bottom left corner, and fans out when it is needed. Some players don’t like this as they believe it covers up too much of the screen, but I like it.

The only problem is, with all other games locating the tool bar centre bottom, is my hand automatically goes there unthinkingly.

I most love this series for its BEAUTIFUL & COLOURFUL GRAPHICS, and this game certainly has a lot of really lovely scenes. Some of the puppets and their environments are awesome.

Primarily a HO GAME, this has dozens of HO scenes, each visited twice, and they are, it seems, around every corner. If your preference is puzzles this is not for you. There are very few PUZZLES, all of them easy, though some are quite ingenious.

As an ADVENTURE it is also extremely easy, and wouldn’t hold the interest of an expert gamer.

But for the rest of us, who just love relaxing into a make believe world, this game is absolutely excellent. I say that even though it’s not my favourite in the series. Trouble is, all of them are so good, it’s hard to separate them.

Nice job, Justy! This was the the Puppetshow game I played first and as such it holds a special place in my heart. Yes it may be easy but I just LOVED it, equally for its beautiful artwork and nasty spider puppets, haha.

I also like Puppetshow #1 but I have to say the subsequent sequels didn't hold my attention and felt like a concept that had dragged on for too long. I have since fallen out of love with ERS games as a whole - too formulaic for me - though every now and then they can still serve up a tasty treat.
genkicoll

Puppet Show: Souls of the Innocent (IHOG)
Review from June, 2010 updated after replaying Steam version in May, 2019

Years have passed since the events at Joyville, and our old enemy has resurfaced at last.  Can you stop her cruel plan before the Souls of the Innocent are lost forever?

Options include separate sliders for Music and Sound, plus Full-screen and Custom Cursor.  Choice of Regular or Expert Mode.

This is one of the very early IHOG's, coming out in early 2010, just seven months after Joyville was released.  Not surprisingly, the gameplay and interface are very similar:  No map, no journal, no hints during the adventure portion and a fan-out inventory that we need to click on.

We have a lot more locations to explore than we did in the first game, and -- at times -- a LOT of to-ing and fro-ing!  As a matter of fact, just when I was getting irritated with the trekking, lo and behold, a shortcut appeared!

Nice bright colors belie the sinister plot.  This game was nevertheless not as creepy as the first one was for me.  It was even more sinister in some ways, but somehow less so, too.  I was feeling a bit of a disconnect, despite the environmental graphics.  Like Joyville, we learn a lot via journals and notes.  The cutscenes are short, and there are no voiceovers, so I really missed having more interaction with the story.  This is understandable considering the time frame that these came out, however!

The hidden object scenes have some light interaction, and will sometimes (but not always) have multiples of the same object on your to-find list.  These scenes range from slighty to super-cluttered.  Each scene will be visited twice - sometimes close together, sometimes far apart.

Just as a side note, there's one HOS where the interaction is to change the lighting, adding a lovely depth to the scene and definitely adding interest!  I love how handled it!

You will occasionally need to write down solutions for the (skippable) puzzles, but as they're not super-complex, you should be able to remember most of what you need.

I have to say that my favorite part of the game was the graphics.  Some of those scenes are just fantastic, and I was amazed by the great detail that went into the hidden objects, themselves.

Bonus Content:
Integrated Strategy Guide, which is available at any time.  The Extra Content button on the Main Menu remains locked until you complete the main story, and you'll have to play the Bonus Chapter before these become available:

We have quite a few new locations to visit, and some of the scenes we've visited before have zoom-in areas that weren't there during the main game.  I wasn't sure what we were investigating until the very short ending sequence, which shows us the actual ending of the game.  Missing this tiny bit of information really doesn't change anything, but the gameplay was still fun, so definitely worth playing the extra chapter.

The PuppetShow series is a great example of how hidden object games have changed over time.  Although Souls of the Innocent is still HO-heavy, this second game has more of an adventure feeling to it, and with a lot more locations to visit.  I would've liked to see a more-immersive style of storytelling, but that is entirely personal preference - I love having a lot of story to my games!  This is a very good game, which I recommend to my IHOG-loving friends.
_________________
Never be a prisoner of your past.
It was just a lesson, not a life sentence.