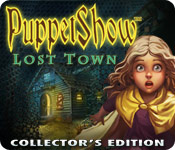 After discovering a new system of caves, the entire town is  excited to explore, until Suzy is kidnapped by a mechanical beast!  Emerging from the darkness and startling the townfolk, the creature  causes a cave-in behind him, leaving no trail to follow. Track the  creature down and explore the mysterious caves in PuppetShow: Lost Town,  a beautiful Hidden Object Puzzle Adventure game!

I love the main menu screen for this game

Robopuppets, very cool - I want it as a screensaver!

It has been over two years since I last played any PuppetShow (when #2 came out), so I will not be comparing Lost Town to the previous installments, as far as quality goes. I think that Lost Town could actually be played as a standalone, as far as storyline goes. Most of the game has nothing to do with the previous two in the series, and that which does can pretty much be figured out from the context of what's happening at the time. Clear as mud? I don't want to give anything away, ya know

There are separate sliders for music and sound, plus options for full screen and custom cursor. The HINT button is refillable during the HO scenes, but there is neither journal nor hint button during the rest of the gameplay.

There are two modes of play to choose from, Regular and Expert. Regular play will show you sparkles on "active zones", whilst in Expert mode you only have sparkles to indicate a hidden object scene.

Unlike most games of this type, we do not have an inventory bar at the top or bottom of the page, retractable or otherwise. Instead, we have a TOOLS button on the left that will fan out our inventory items for us to choose from. It closes automatically every time you use something, which can be a bit cumbersome if you have several items to use at once, but it still looks cool

Although we lack a journal, there are multiple notes and diaries that we find during gameplay. LOVE it! Extra story for those of us who enjoy it, and those who don't can just skip over these gems. The opening scene is voiced over, but most of the cut scenes are visual only. Be WARNED that the final cut scene is voiced, but with NO subtitles. Be sure to have your sound turned on before you finish the game!

The story is engaging, the gameplay is interesting, and the hidden object scenes... messy! Typical junkpile scenes with some interactive areas. While it's usually obvious what you have to do (ie. for "apple slices" you'd need to find a knife and cut an apple), sometimes you'll just have to mouse-over to find interactive areas. Of course, if you're on Regular mode, you'll have sparkles to show you where to look.

The graphics, whilst not incredible, are very nice. I was actually playing and watching TV at the same time, so I had the sound turned down - can't tell you anything about the music! Despite the multi-tasking, I still was able to immerse myself in the game and enjoy it.

This is a solid game that can stand alone, or play the previous two to expand on the story a bit.

THE STORY starts out a familiar one. Again the citizens need your help in dealing with unruly mechanical puppets. This time there is no sign of the nasty spider puppets we know from the first two games of this series. Instead a King Kong sized robo-puppet steals a small girl in full view of the townsfolk, and makes off with her.

In the course of tracking him down, you discover an isolated town that has been sealed off from the world for years. Strangely, there are no people here, just broken down and rusted puppets.

This is my least favourite of the 5 PuppetShow games, but is still a magnificent game

If you’re familiar with the series, you don’t need me to tell you about the BEAUTIFUL, STYLIZED GRAPHICS & IMAGINATIVE LOCATIONS of this edition. Much of this one is set in underground and mining locations, so the ARTWORK is somewhat MECHANISTIC, which is not so attractive to me personally, but is still wonderfully done.

The gameplay is as always HOS DOMINANT, they are slightly interactive, and repeated twice. This game introduces highlighted items in the list to tell us which items are interactive. These HOS have so many things that open and shut that the extra information is actually more confusing than helpful, I find myself preferring the earlier way.

The PUZZLES are HARDER than in previous games, and there seems to be more of them. A number of them are quite interesting variations on common puzzles.

The game flows well, there is little in the way of backtracking, except as appropriate – ie. To give the game a filled-out feel. Nevertheless, with NO MAP & NO HINT, it is sometimes difficult to get around. Despite having played this game previously, I still had to resort to the walkthrough once (that’s an improvement on my past performances).

As always, this PuppetShow game can be played stand-alone without missing out much, but it is far more fun in conjunction with the other PuppetShow games.