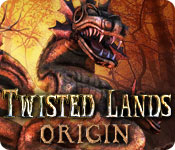 Experience the birth of the terror that gripped the island of Tormente in the Twisted Lands series of hidden object adventure games! Take the role of a gifted detective who's always trusted his intellect and never given a second thought to the horrors hidden in the dark corners of the world. Watch his survival instincts kick in as he travels to Tormente to find a young lady and discovers misshapen creatures that threaten to kill him before he completes his task. Then protect the woman and her son from something even more evil and race to escape the island before death catches up!

Twisted Lands: Origin will lure you in with stunning artwork and bone-chilling audio, and then hold you captive as you explore dozens of bloodcurdling locations, search for useful items and solve cleverly designed puzzles. Innovations in this captivating prequel will have you interacting with cinematic videos to make split-second choices and solving dozens of unique mini-games. Tie the many threads of the Twisted Lands saga together in Twisted Lands: Origin. Every story has a beginning, but few are as horrifying as this! 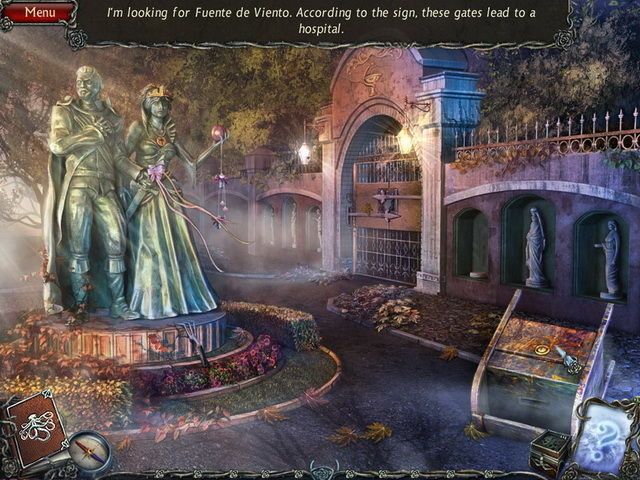 First off, I will say that this game CAN be played as a standalone. The first two games are linked, but this one tells the back story - things that happened before Angel and her husband (who were the focus of the first two games)

Like the other games, we have sliders for music and sound, but they've added a third slider, this one for the voice-overs. I had trouble choosing a good level for the music, as the sometimes-dramatic music was a bit distracting, but overall, it's very environmental and appropriate to the game.

Also like the previous games, the HINT button will show you which direction you need to go during the adventure portions, without using up your hint.

There are many cut-scenes in this game, but this time there is an extra element to those scenes -- you sometimes have to interact with them. This element truly draws you into the story, making it immersive in a way I've not experienced before. The cut-scenes are movie quality, and occasionally, the people look so real that it's as if live actors were part of them, à la the last few Mystery Case Files games.

If you don't care about story, you're likely not going to enjoy this game nearly as much as I did. Like the previous games in the series, this one is rife with journals and notes that tell the story, not to mention the cut-scenes.

There are some differences between this and the last game (Insomniac), such as: The cursor isn't necessarily going to change when you mouse-over points of interest. Sometimes it will change to a hand, etc, but most times you just have to watch for it to turn blue. If you hadn't guessed, I played on Expert Mode, thus no sparklies. There is an indication when you need to do a hidden object scene, but besides that, NONE! Hooray!

Alawar got it right!

Instead of having a separate task-list, you will find it inside your game journal. Speaking of which, whereas in Insomniac the journal gives hints, THIS journal you MUST read in order to keep up with the story, and no hints! Hooray again! There is also a map in there, for those of you who need them, and it shows where there are places that you need to "do stuff". haha

The graphics, the story, and the gameplay are OUTSTANDING. I was so enamored with the game that I was unable to write this review whilst I played, something I usually do so that I don't forget to add details. I went for so long without a HOG scene that I actually forgot that I was playing a hidden object game. Sadly, the last third of the game had a lot more HOG scenes than the first 2/3, but that's just me being spoiled.

As I mentioned at the beginning of this review, Origin can be played as a standalone - playing this won't ruin the first two games for you (if you haven't played them yet) -- it might even make them a bit less confusing

I plan to play the whole series over again, including this one, and this time I'll be writing down names to help me sort out who's who, as well as the timeline.

There is still one thing that's not been answered yet, timeline-wise, and that is how
*WARNING - DO NOT READ UNLESS YOU'VE PLAYED ALL THREE GAMES*

Spoiler:
The woman in the picture with Mark (David? Ack, I'm so bad with names... Angel's husband, whatever his name is) could be pictured with him at all, when she was show in the opening cut-scene of Origin, which was in the 1920's, when he and Angel were in more modern times.

We still have some questions, which hopefully will mean another game. This is one of the very best game series in the genre, in my opinion, and I am thrilled with just the prospect of another one. Either way, here's hoping that Alawar will stick with the awesome elements of Origin and carry them over to whatever project(s) they are working on now.

I can't say enough about how wonderful this game is. DEFINITELY one to check out if you like adventure-HOG's.