WeHave clear skies Saturday night? Look up and take at least a few moments to observe the magnificence of the Full Pink Moon.
The Moon will be up from sunset to sunrise on Saturday night. Check your local forecast on our the website or on our app to see if your sky conditions are suitable for viewing the night sky.

Read more: Why is the supermoon so compelling to us?

Regardless of its name, when you gaze up at the Moon on Saturday night, it likely won't turn pink.
For the Moon to actually change colour, we'll have to wait until the next Full Moon, in May, during the Blood Flower Moon total lunar eclipse. If you're looking just at moonrise, though, atmospheric conditions may cause the Moon's light to appear tinged slightly pinkish or orange, but that will quickly fade.


According to The Old Farmer's Almanac, each Full Moon of the year goes by several names. The name given to the April Full Moon is Pink Moon. It is also known as the Sprouting Grass Moon, the Egg Moon, and the Fish Moon.
As for why April's Moon is called the Pink Moon, the Almanac says: "This full Moon heralded the appearance of the 'moss pink,' or wild ground phlox — one of the first spring wildflowers." 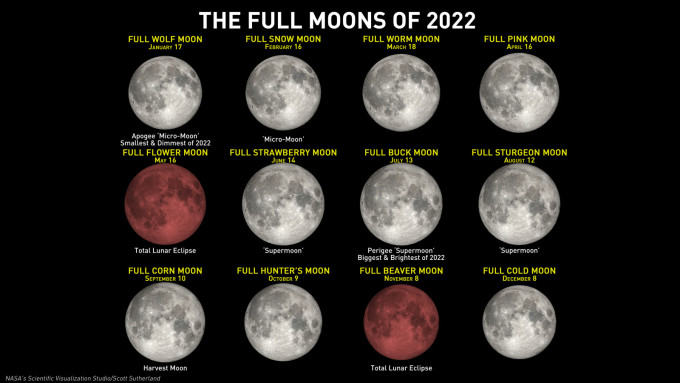 This graphic collects all the relevant data about each Full Moon of 2022, including their popular names, whether they are a 'super' or 'micro' Moon, a perigee or apogee Full Moon, and whether they are remarkable in some other way, such as a Blue Moon, Harvest Moon or a lunar eclipse. Credit: NASA's Scientific Visualization Studio/Scott Sutherland


Some named it after the timing of when plants were known to bud or flower (Apache, Cherokee, Mohawk, Sioux, and Tlingit), or when they harvested things such as maple sugar (Abenaki) and blackberries (Choctaw), or when they planted crops (Algonquin and Winnebago). Others named them after the general seasonal trends of spring (Comanche, Creek, Passamaquoddy, Shoshone, and Zuni), or the chores that occupied their daily lives during this month (Lakota and Kalapuya).


RELATED: SEE EVERY VIEW OF THE MOON FOR 2022 IN LESS THAN 5 MINUTES

Rather than travelling around Earth in a perfect circle, as the Moon orbits, it traces out an ellipse. Thus, about half the time, it is closer to Earth and the other half it is farther away. Due to the gravity of the Sun and the other planets, the Moon's exact distance from Earth when it is full changes, month by month.


January's Wolf Moon was the farthest and smallest Full Moon we will see for all of 2022. Since then, the Full Moons of February and March have gotten bigger, and April will continue that trend. On the night of Saturday, April 16, the Moon will be around 370,000 kilometres away — about "midway" between its average distance (384,000 km) and when it becomes a supermoon (at less than 361,000 km). 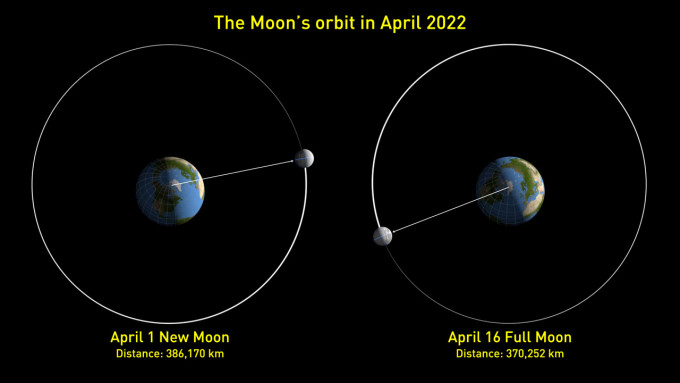 Although it may appear to be circular at a glance, the Moon's orbit is actually elliptical. This diagram shows the position and distance of the Moon during the April 1 New Moon and April 16 Full Moon. Credit: NASA's Scientific Visualization Studio/Scott Sutherland
We won't see the next "super" Full Moon until June.

Seeing the Full Moon at any time of night is a spectacular sight. However, go out just after moonrise or just before moonset for what is usually an exceptional treat. It's not something the Moon itself is doing, though. It's due to a little trick of our mind known as The Moon Illusion.
There are times when the Moon actually does look bigger to us, such as during a supermoon, when the Moon is physically thousands of kilometres closer to Earth than usual. There are other times, however, when we just think it looks larger.


As our eyes take in the world around us, our brain knows from experience that objects close to us tend to appear larger and in focus. In contrast, distant objects tend to be tiny and blurry. From this, it also knows that for a distant object to appear in focus, it must be very large. 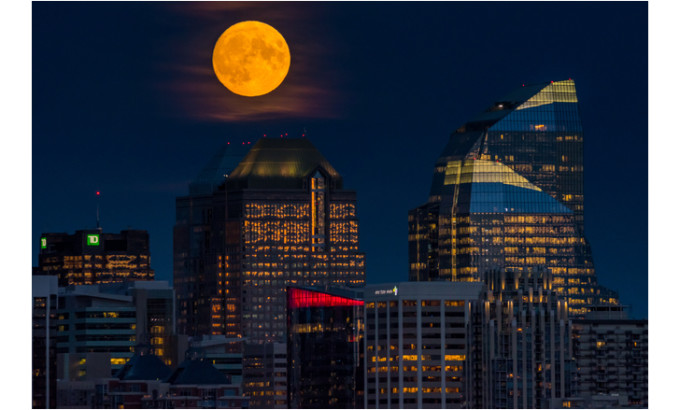 This close-up of the Harvest Moon was snapped in Calgary, AB, on September 13, 2019. Credit: Siv Heang


So, when we see a bright Full Moon hanging in the sky above the horizon — crisp and clear and in focus — while at the same time, all of the objects on the ground become smaller and blurrier the closer they are to the horizon, the combination causes our brain some confusion. To compensate for this, our brain interprets the Full Moon as being much bigger than it truly is. To be clear, the Moon is certainly much larger than any of the objects on the horizon (it's 3,474 km across), but this 'illusion' makes the Moon look huge!


Look up into the sky closer to the middle of the night, and the Moon will be high above our heads. Usually, it will be the only thing we see, other than the stars and maybe a few planets. At that time, the brain is focused only on the Moon, and without the other objects in the field of view to complicate matters, it is free to just 'see' its actual size. 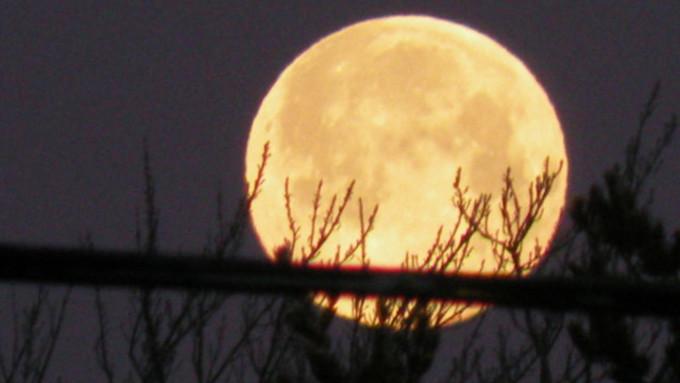 This zoomed-in image of the Full Snow Moon was captured from Salisbury, NB, on February 9, 2020, and uploaded into the Weather Network's UGC gallery. Credit: Darlene MacLeod/Smith


We have a few tricks of our own that can cancel out the Moon illusion, though.


For the first one, we don't need technology. Just go outside after sunset and find the Moon near the horizon. Stretch your arm out towards it, and cover the Moon over with your thumb or even your pinky finger. Note how big the Moon looks compared to the digit in question, and keep that in mind. Maybe even take a picture of it, if you want. Later in the night, check out the Moon again when it is high in the sky. It may appear smaller than when you saw it earlier, but repeat the step to cover it over with your thumb or finger. Compare it with what you saw before, and you'll find that the Moon is actually precisely the same size at both times.


There is a way technology can help us, though. When the Moon is low on the horizon, take out your cell phone, turn your camera on, and point it at the Moon. Note: it is possible for the Moon illusion to still work on us when looking at a picture or video. This is because the brain will make the same judgments of distance, blurriness, and size as it did when looking at a 'live' scene. Still, directly comparing what we see in the sky at that time to what is shown on our small cell phone screen can help put things into better perspective. Plus, you can also take a few pictures to upload into the Weather Network UGC Gallery while you're at it!