Unsung Heroes is a brand new time management game from GameHouse. It follows the path of three passionate archaeologists, determined to uncover history!

In Unsung Heroes - The Golden Mask, the three girls are excavating in China. They stumble upon the story of Xi Niu, a Chinese girl who lived over a thousand years ago. You will switch back and forth between modern day and ancient China as you restore artifacts and slowly start to fill in the story behind them.

Play first as adventurous Ivy, brainy Stephanie and powerhouse Diana as they search for lost treasure. Then go into the past and play as brave Xi Niu, a girl determined to find justice for her family!

As a young girl, Xi Niu watched as her parents were brutally murdered by a man wearing a golden mask. She vows revenge, somehow, some way... 10 years later, she is unexpectedly offered a position as a courtesan in the palace. She seizes the opportunity, as it offers a way to locate the man in the golden mask.

But life is not simple in the palace. It is a snake pit of intrigue and politics and one misstep can mean death. Xi Niu will need to learn how to play the game to survive. Can this girl from the country navigate the dangerous waters of the palace to exact her revenge?

Help the three girls find the pieces of this puzzle and piece together the story of the brave Xi Niu!

Play in both the present and the past!

Learn about artifacts based on real findings!

Explore 4 different dig sites, each with 4 unique artifacts to uncover! 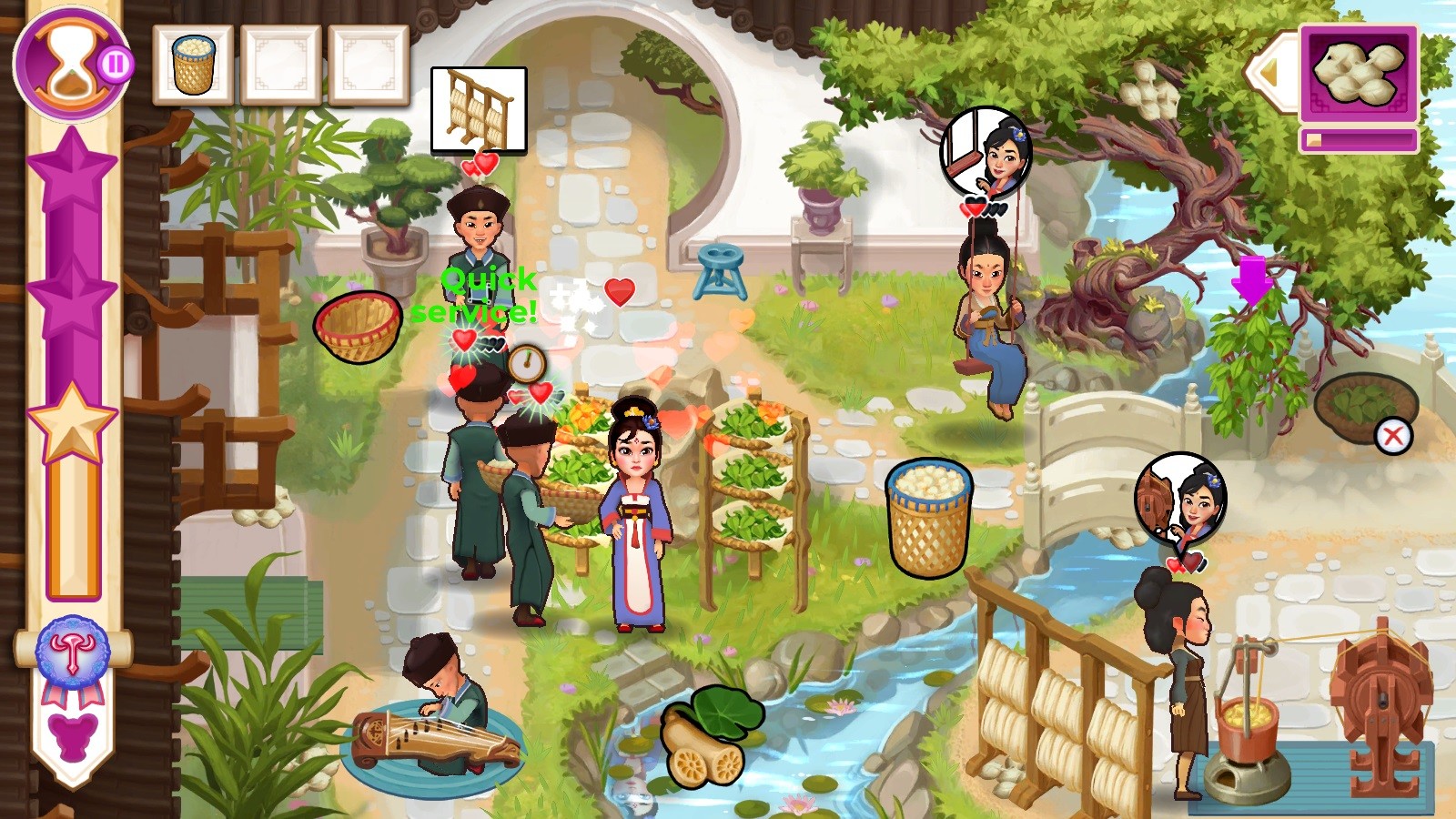 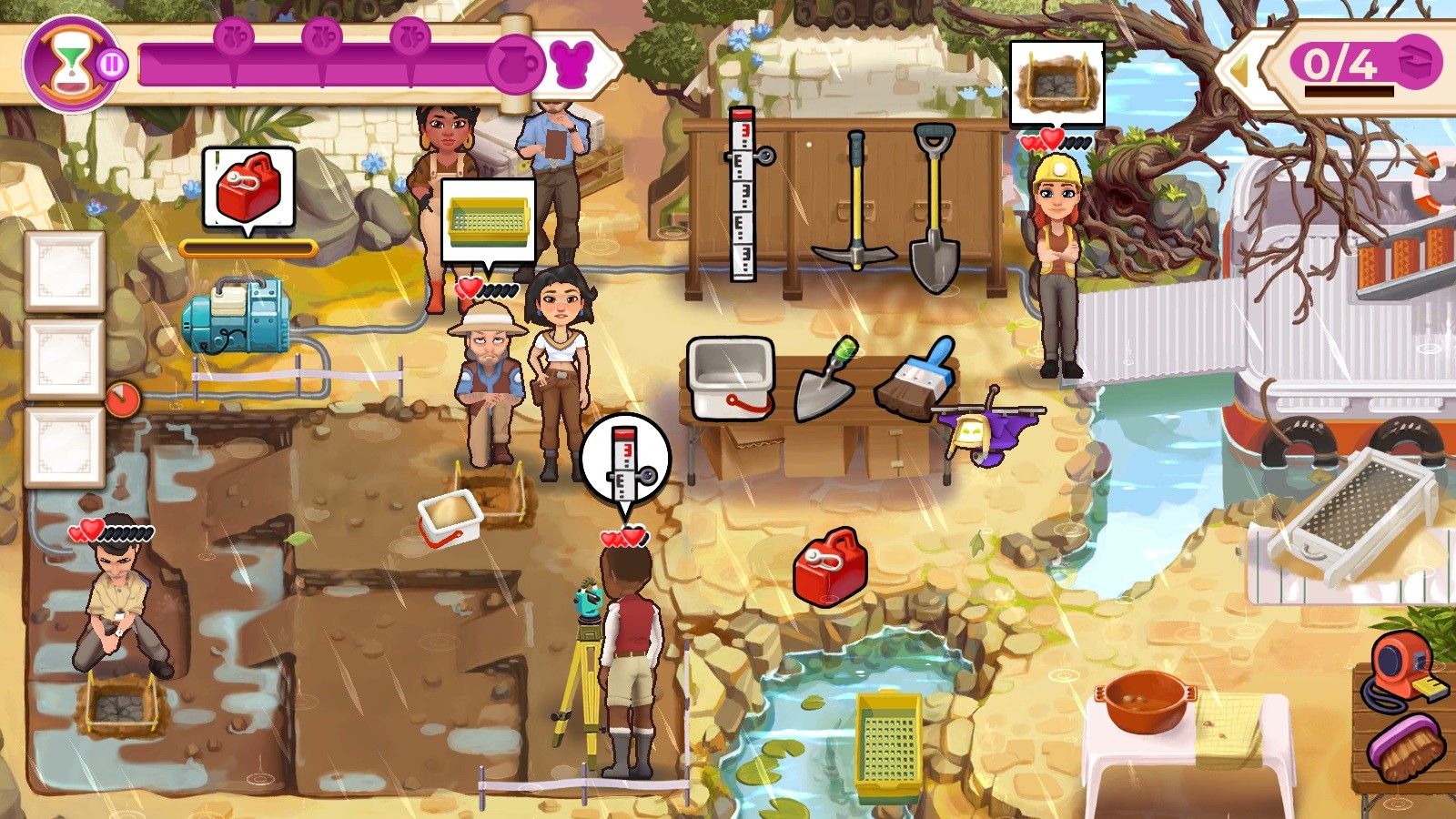 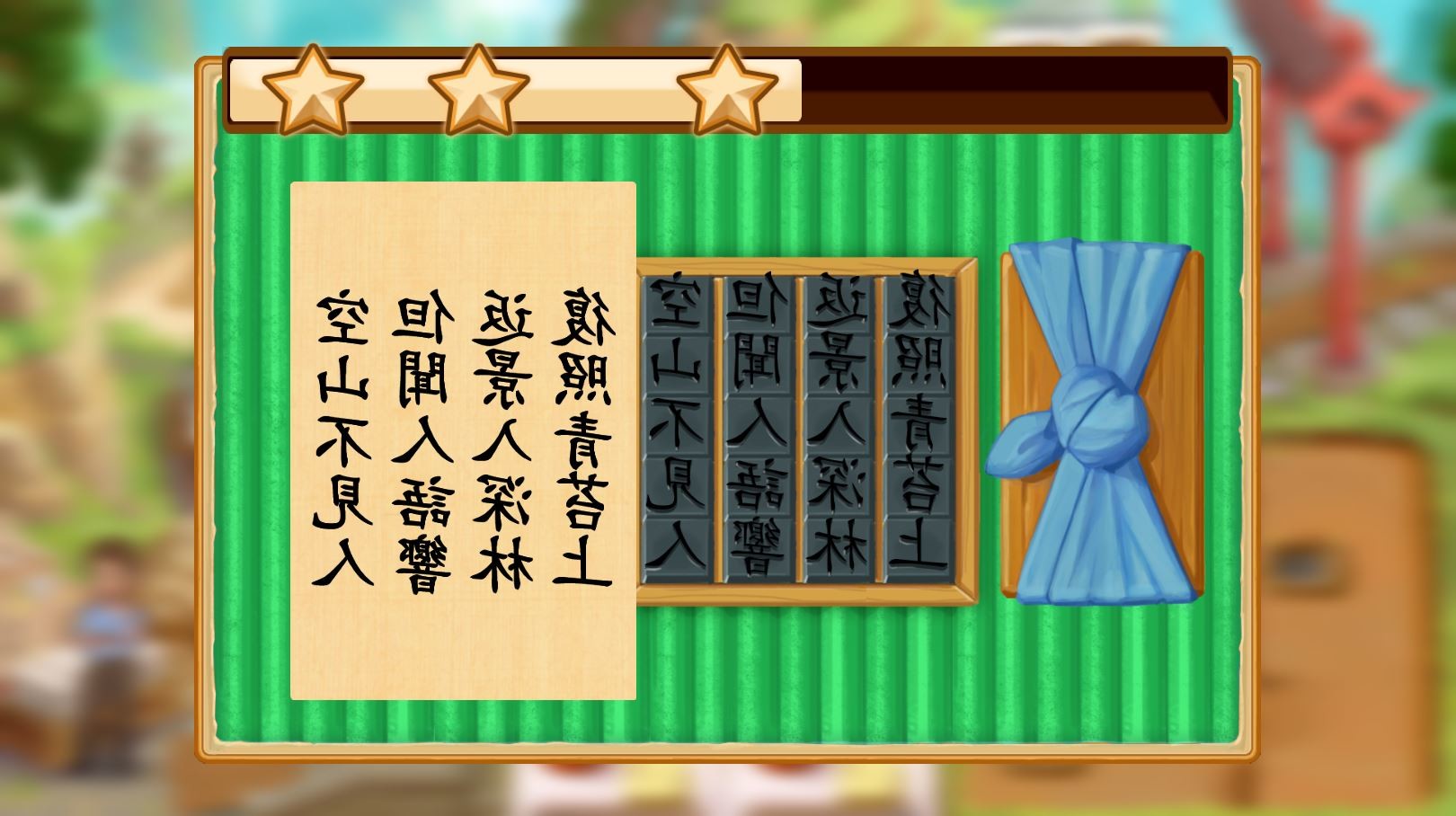 Re: Unsung Heroes: The Golden Mask

A great setup for a series whose future installments will need some adjustments to keep gameplay interesting.

Options include separate sliders for Music and SFX, Show Hints and Full-screen.  No choice of difficulty.  There is no Custom Cursor, so if you have any trouble spotting it, check out this super-simple Guide to increase your cursor size system-wide.

Modern day archeologists Ivy, Stephanie and Diana are excavating in China, and with the help of their trusty high-tech drone, Gritt-E, they are able to piece together an untold story from the past.  Using "carbon-memories" from the ancient artifacts that the team finds, Gritt-E slowly reveals the story of Xi Nui, a then-child who witnessed the brutal murder of her parents by the man in a golden mask.  For the 10-year celebration of the victory of that battle, village girls are being invited to become courtesans in the royal court; an opportunity that Xi Nui jumps at, in hopes of finding the man who killed her parents.

Xi Nui has her work cut out for her, as she must first learn to be the ideal woman (surely the inspiration for the Companions in Firefly):  Tea ceremony, playing an instrument, dancing, etiquette and other social graces, not to mention the fact that the palace is filled with intrigue, jealousy and outright treachery!

It is possible for the younger crowd to play this game, as the full extent of a courtesans duties are never touched upon.  As long as said young person can handle the implications of an army coming to Xi Nui's parents and killing almost everyone in it, then it should be OK. 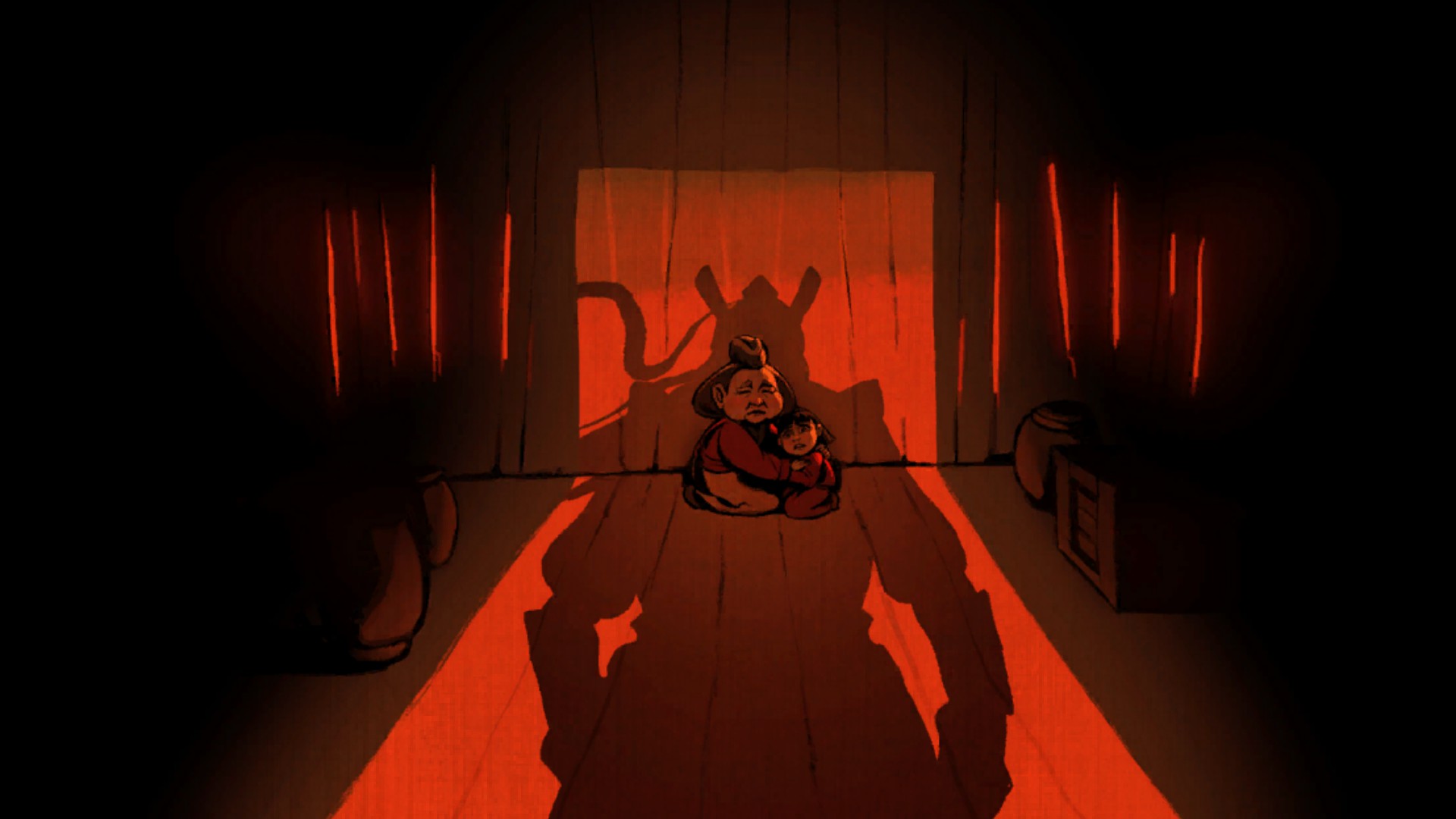 This is both familiar and unlike any other game in the GameHouse Original Stories series of games.  For one, it does not take place in Snuggford, and second, the gameplay is different depending on whether you are playing in modern day or in the past.
Also take note of the fact that during present day the mouse will be found as a jade artifact, whereas in the past he'll pop up like usual.

There are 10 in-game and Steam achievements.

The predominance of gameplay takes place at the archeological digs with Ivy, Stephanie and Diana.  We play as Ivy and deliver items to other archeologists, as well as spell them when they get tired.  If Ivy's picture is in the pop-up bubble with -- say -- a shovel, you don't need to take anything with you, just go over to them.

Here is the major difference with the modern day areas:  You cannot fail these levels.  You will keep playing at that spot on the map until you find all of the pieces of an artifact.  There are still "days", so you do get a break. 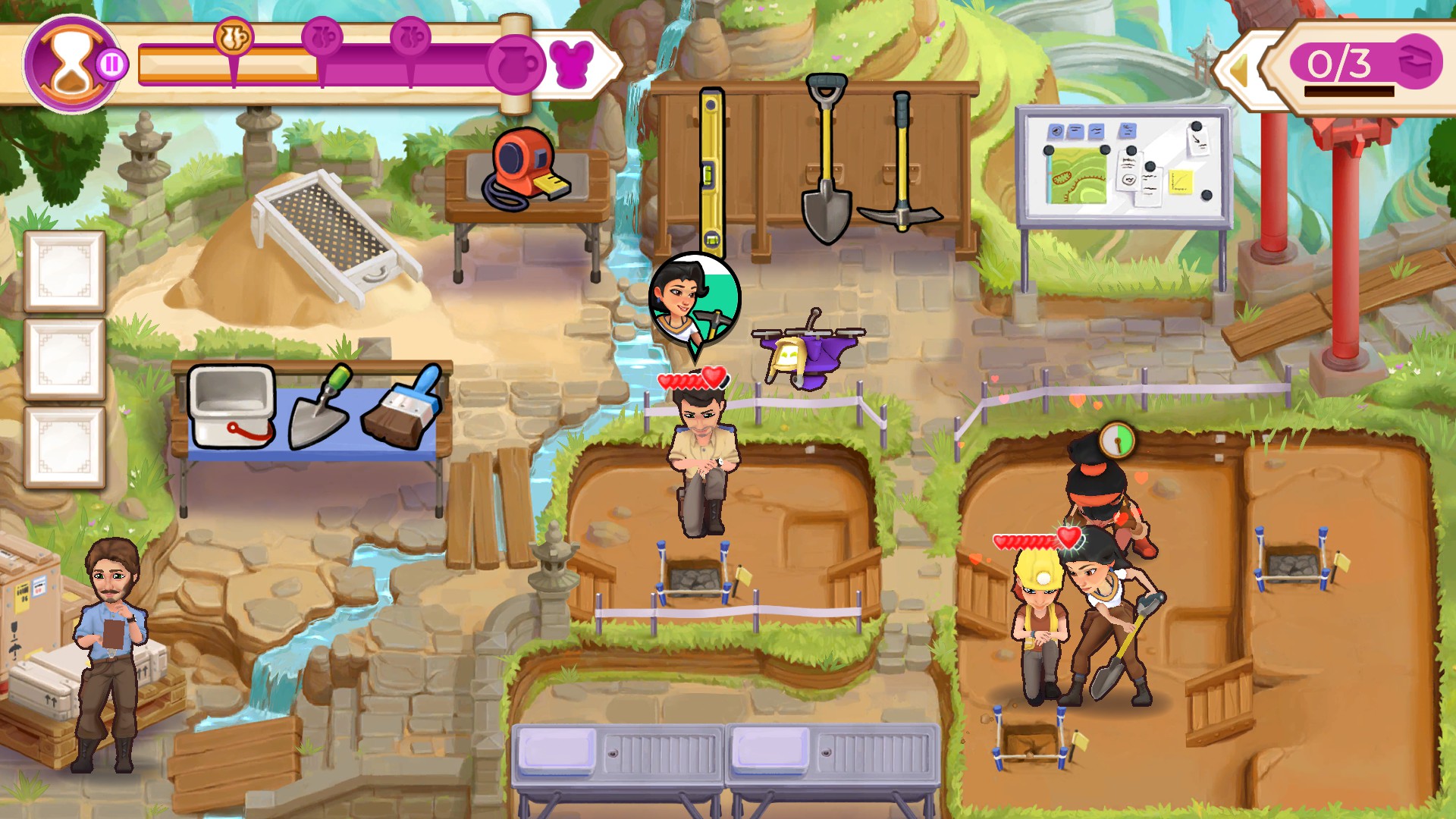 Once you find all of the pieces of an artifact, two things will happen:  First, Gritt-E will reveal more of Xi Nui's story by unlocking levels for you to play, and you'll switch from the artifact bar at the top left to the treasures bar at the top right of the screen.  At this point you can continue the story, or stay where you are and look for treasures.

The treasures bar is filled based upon workers' happiness.  The happier they are when they take their leave, the more you'll fill up the bar.  The treasures are important for two reasons:  1. They will get you an extra cash grant from the museum that is funding your trip (can buy upgrades more quickly) and 2. Each one has its own lore, which you can access from the Museum area.

Note that you may have to search for treasures before the jade Carl will show up!

Here we play as Xi Nui, and the gameplay is more what you would expect from this type of game.  Each level has a goal that you need to meet, and here is where you will find the story progression.

There is no "store" in the past.  What you have instead is automatic progression to a higher concubine tier, which will boost your stats (ie. faster movement, slower mood-dropping, etc.

Pop-up Mini-games are not timed during modern day, but they are when playing as Xi Nui.  For both present and past there are mini-actions that can pop up, and there are the dreaded drag-in-a-circle actions that I have so much trouble with... Especially in the past when you may have to drag it around four times before the action is completed!  Ack!

I like the graphics and character design a lot, but I was floored by the care the designers put into the reflections.  Characters are reflected in both mirrors in water, and it's just gorgeous! 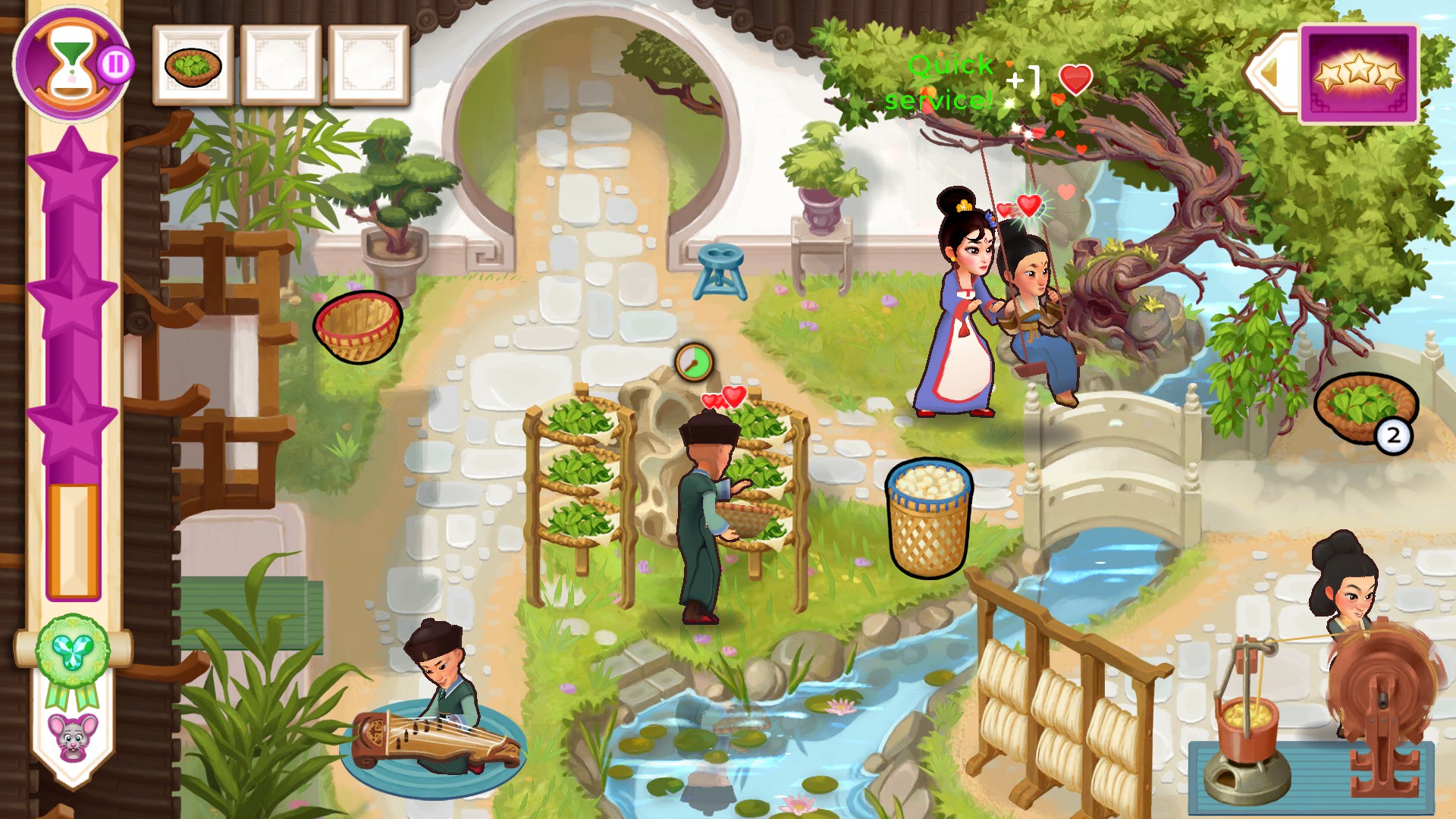 The premise of an archeological team unearthing (literally!) untold stories from the past is a solid concept, and a great idea for a series.  For future installments, however, I'd like to see two things:  1. Character development for Ivy, Stephanie and Diana, and 2. More time in the past.  The digs are good, and they do unearth new areas within the sites to keep things interesting.  There are occasionally generators, nighttime scenes or an excavator to mix things up, but you'll be using the same tools and doing (mostly) the same minis at every site, so I'd suggest some more variety in future games, but overall, this is a solid title with fun gameplay and an interesting story.
_________________
Never be a prisoner of your past.
It was just a lesson, not a life sentence.

» Riddle of the Mask
» The Cursed Island: Mask of Baragus
» The Golden Years: Way Out West
» Halloween Chronicles 2: Evil Behind a Mask
» Awakening 7: The Golden Age