Available at:
VOTE to get it on GOG
Steam

Song of the Deep is a metroidvania-style action-adventure game following a girl’s quest into the unknown to find her missing father. Combining discovery, skill, and suspense with an unforgettable narrative, this underwater journey will challenge players to explore, experiment, and skillfully navigate a vast ocean landscape.

Gameplay
Song of the Deep delivers unique gameplay in a tale of love, heartbreak, and triumph. Explore a fantastic non-linear interactive underwater world filled with more than 200 treasures to collect. Equip your submarine with 30 upgrades and 15-plus abilities to access new areas of the sea, and combine those abilities in surprising ways -- like catching a torpedo with your claw arm mechanism. Outwit, outmaneuver and battle creatures along the way, from lantern jellies to giant bosses like The Watcher.

Storyline
Merryn waits all night for her father to return from his fishing voyage. He never does. After a vivid dream showing her father trapped under the sea, Merryn is determined to save him. This unlikely heroine builds a small submarine from spare parts and sets off to rescue him. Along the way, she’ll make friends, discover lost civilizations and ruins, and upgrade her submarine to explore even deeper. The terrain and monsters of the deep are daunting, but Merryn’s courage, intelligence, and love for her father will help her overcome adversity. 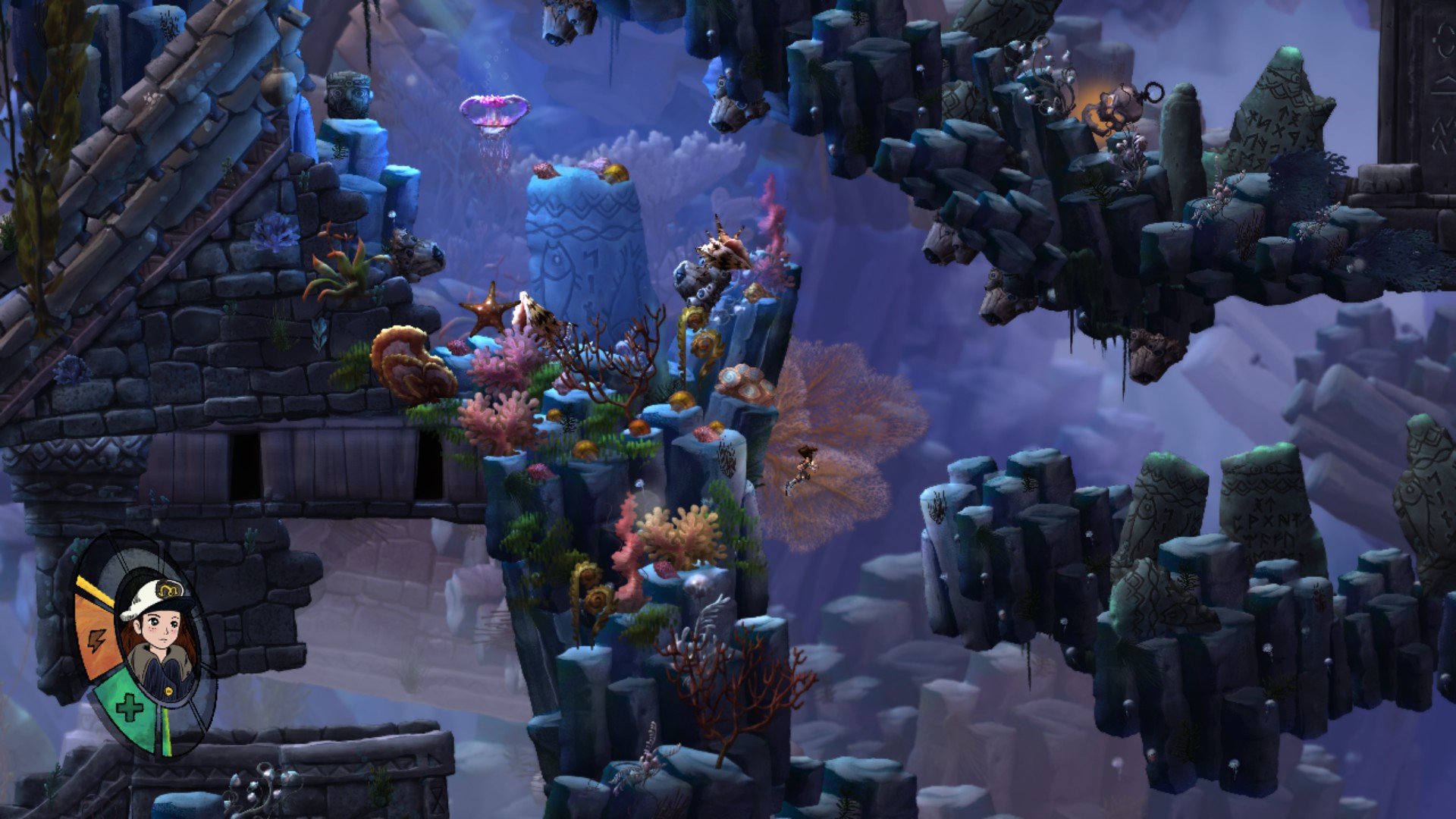 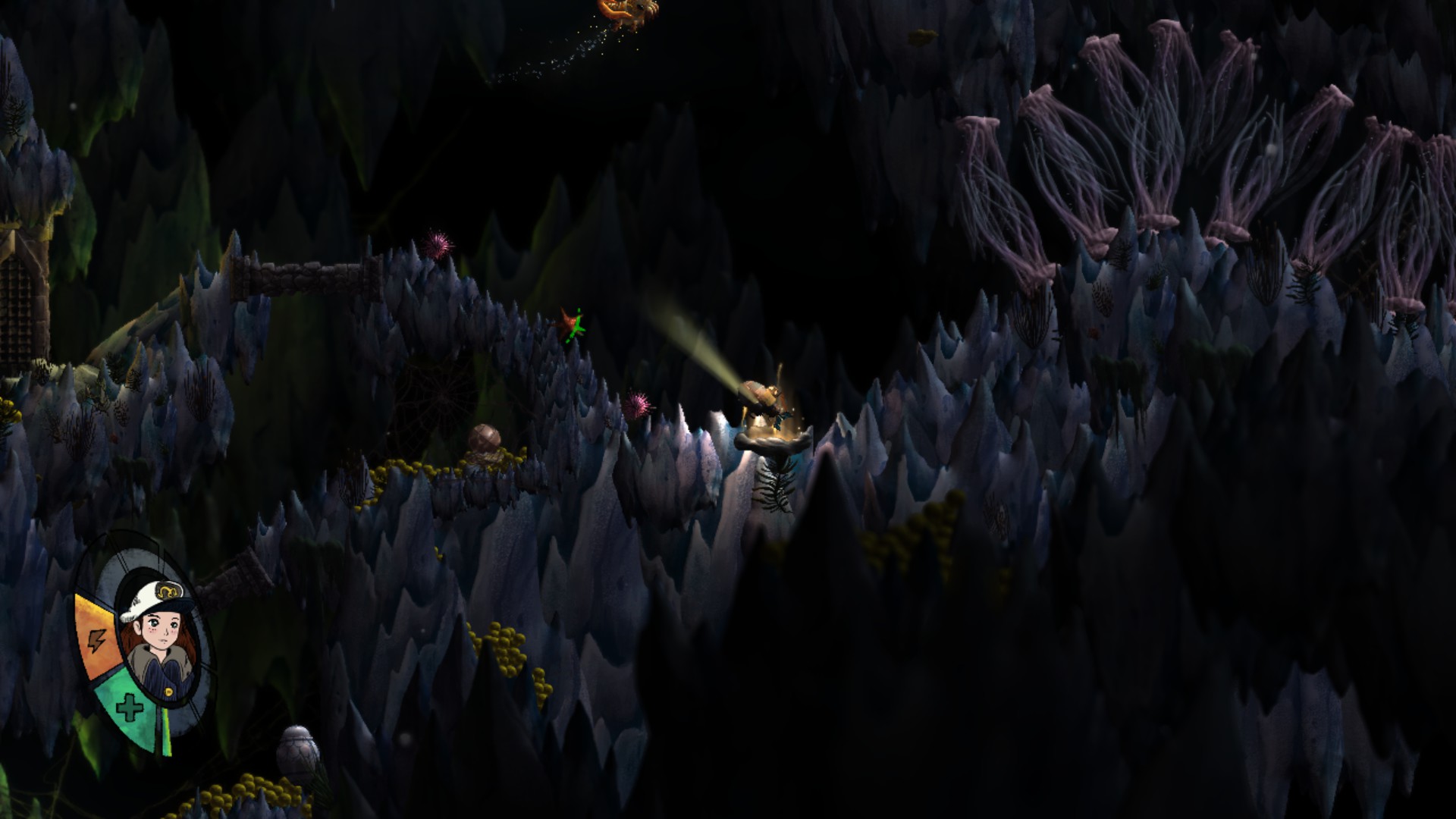 this is now on my wishlist.
genkicoll

It's really good, kind of like an underwater Ori without the rage

Song of the Deep (Platformer-adventure)

Options include Subtitles, Resolution, Brightness and Language, plus separate sliders for Music, Sound Effects and Speech.  You can play with Gamepad or Keyboard & Mouse, but they are NOT remappable. There are also three Difficulties to choose from: Beginner, Intermediate and Advanced.

Despite the fact that we are underwater, our sub (and later Merryn, herself) is highly maneuverable, though I might have felt differently if I had been playing with keyboard and mouse.  I highly recommend a controller with this title, as I have a feeling that it would have become very frustrating for me if I hadn't been using one.

Song of the Deep is a story-driven underwater "platformer" adventure, with heavy emphasis on puzzles.  There are enemies down there in the deep, but if you prefer exploration, you can usually avoid them.  There will be times when you can't advance unless you fight, and you're going to want to stop down and take out some of these enemies, if only for the coins that you'll gain from defeating them... but I'll come back to that later.

The story is what drives the game, and it's beautifully interwoven with the gameplay.  Pay attention to what it says the first time you die, as even that becomes part of the tale.  Between the narrator and the environment, I felt like I was immersed in a fable... and it's no wonder, as it turns out that the game is based on Irish/Celtic lore!

The puzzles are many, and were sometimes a source of frustration.  There were times when I simply could NOT figure out what to do and had to resort to Youtube.  Sometimes I had simply missed seeing something interactable on the scene, and sometimes it was more like, "OH! So that's how you get x-treasure from x-area/creature/whatever in the environment.

Be sure to visit the save spots (aka Tyne Wells) often, as you will lose all progress if you die.  That amazing treasure you just got will *poof* disappear if you die before you save.  The only exception is the item-upgrades that you find - the game will save as soon as you pick those up.  These items are things that increase your energy and health, so you'll definitely want to seek them out!

There are a lot of things you will not be able to get until you've progressed in the game and gotten some upgrades, meaning that you will have to revisit areas multiple times.  We do have fast-travel portals (aka Warp Vortexes), but they are spaced out quite a bit.  Still, they do save quite a bit on travel time!

The Hermit Crab is our friendly traveling shopkeeper, and will give you items to help upgrade your sub... for a price, of course.  All of those coins and treasures you've been gathering can be spent here.

All treasures, save points, item-upgrades, shops and warp points are marked on your handy-dandy MAP... provided that you've discovered the area in which they reside.  Search carefully, as there are hidden passages scattered throughout The Deep.  There is an upgrade that will help you to find them, but you won't obtain it until late in the game.  It is possible to finish the game without fully-exploring, and even to miss some parts of the story (which I discovered after I actually finished the game.)

I had mentioned that our character, Merryn, will eventually be able to swim independently, but in theory that could cause problems, right?  Some areas only Merryn can fit in, sometimes you'll need to separate for a puzzle, maybe you've just obtained something that you really don't want to lose if you die, or maybe she's trapped in the environment!

The good news is that the devs thought of all of those things, and you can therefore reunite with the sub by holding down a button for a few seconds.  Voilà~!  Issue no more!

In addition there are:

After you finish the game, you can still "Continue" from the main menu if you would like to go back and finish up achievements and/or collect all of the treasures and items - it will take you back to the save point immediately before the final battle.

If you're hunting down 100% completion (NOT an achievement, but the way), I highly recommend checking out this Item Collection Guide , which explains the puzzle mechanics involved for many of those seemingly-impossible-to-get treasures.  Keep an eye on the loading screens, as well, as they will give you some helpful tips.

The graphics are beautiful, the music and narration very fitting, and the gameplay is quite well done.  Some of the puzzles were, as mentioned, frustrating, but not so much that I would steer anyone away from the game.

Overall, I'd say that this is a solid adventure that deserves more attention.  Definitely recommended!
_________________
Never be a prisoner of your past.
It was just a lesson, not a life sentence.