You are not connected. Please login or register
4 posters

It's been a long time since I posted a recipe, but I made a new one today that seems to be a winner. If you like tortellini and sausage and soup, this is easy and tasty!

As always, I'll include a link to the recipe I used as inspiration to give credit where credit is due, then I'll add my own tweaks because I am incapable of following a recipe directly as written.

Tortellini Soup with Sausage and Spinach

Ingredients:
1 tablespoon vegetable oil (I used olive oil since that's what I have handy)
1 lb Italian Sausage (I used 2 lbs since hubby's meat eater. I used mild, but added some red pepper flakes for some kick... but just a little kick)
1/2 cup diced onion (about 1/2 medium sized onion)
1 tablespoon minced garlic
1 ­28 oz can crushed tomatoes (I used tomato puree since I don't like slimy tomato strings in my soup)
1­ 32. oz. box of vegetable broth (I used chicken since it's what I had)
2 tablespoons fresh chopped basil (I used dried since it's November in MI and my basil is dead for the winter)
2 teaspoons salt
1 teaspoon pepper
1 package tortellini (I used a combo of tortellini and ravioli since I was cleaning out my freezer)
1 cup packed fresh spinach (I probably used closer to 2 cups since I never know when to stop adding things to a soup kettle)
(I also simmered a Parmesan cheese rind in the soup since I had one and it adds amazing flavor to soup broths)


Is extra good with some Parmesan cheese sprinkled on top, if you like that sort of thing.

I also added about 2 Tbs. of heavy cream at the end to sort of smooth it all out. It's totally not necessary, but I had about 2 Tbs. of cream left in a container in the fridge and rather than toss it out and waste it, I added it. That, my friends, is the beauty of soup!


You could also use ground chicken or beef in place of the sausage. I'd just add some extra seasonings if you do.
You can use whatever filled pasta you like. I would guess you could also use unfilled pasta too, like bowties or something fun like the wagon wheels. It's your soup, and I'm not the soup police. 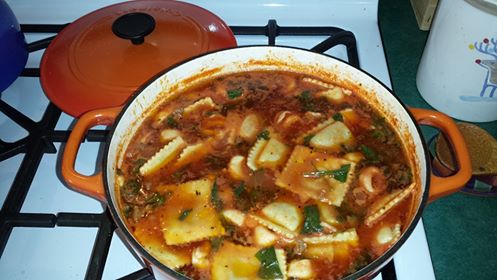 I think I will actually cook this!
Esme

It's really good! Hubs had two bowls and I may have snitched an extra tortellini to snack on... you know, to check and make sure it was good enough to serve to others.

It's a chef's thing.


That's my story and I'm sticking to it!

Oh my gosh, this looks so incredibly tasty and I love soups.

You should come to my house and make it, Esme. I don't have all the ingredients, but let me know ahead of time and I'll go to the grocery.


Let's just say that after two days, there is very little left in the pot.... and there are only two of us here. LOL
pippi

We're going to make a vegetarian version of your soup Esme!  Thanks for posting the recipe!
Esme

I'm so glad you're going to give it a try. It is really, really tasty. I hope you like it!
Sponsored content