Little update on my anime consumation as of lately. I just bought the
third (of four) Black Butler volumes today (the anime, the manga will
still run for a while here in Germany) and now I'm waiting for number
four (out in three or so months), because (as with volume 1 and 2)
they've left off at a point at which I definitely want to know what will
follow.

A short description: Ciel Phantomhive (get used to strange English names
when you're reading manga...) is the very young (about 11 or 12) head
of the noble Phantomhive family. He's also the 'Queen's Watchdog', the
contact of the crown to the underworld. Ciel's past life has been
seriously changed the night his family home burned down. Almost all
servants and his parents were killed - but not necessarily in the fire.
Ciel himself disappeared, only to turn up one year later (around the
time the story starts) with the ever faithful Black Butler, Sebastian
Michaelis, at his heels. Ciel is looking for those who are behind the
murder of his parents and his own subsequent slavery which ended the
night his owner (who had before stripped him of all dignity) tried to
call up a demon. He succeeded, but the demon preferred a pact with the
supposed sacrifice Ciel to a pact with his owner. The demon (or rather
devil) is, of course, Sebastian.
While there are a couple of side stories, both in the manga and in the
anime (though in the anime there is at least a loose connection even in
those), most stories are focused on Ciel's search for those who killed
his parents - and on his wish to have his revenge.

One character which only appears once in the manga (in the first long
story in which Ciel is hunting Jack the Ripper) appears more often in
the anime, which is a good thing. Grelle Sutcliffe (the booklet of the
anime claims he's male, but he's more of the 'undecided' type you'll
encounter in manga and anime sometimes) is a Shinigami, an Angel of
Death of Japanese folklore who is supposed to guide the souls of the
dead into the afterworld. But Grelle definitely overstepped his bounds
(if by 'overstepped' you mean 'trampled them down, set them on fire and
scattered the ashes') when he took an active role in killing humans who
deserved death together with the human Jack the Ripper (who, in this
story, is a woman). For this, he is degraded at the end of the story
(and he's down to a pair of very, very small scissors by now, he started
out with a chainsaw...). In the anime, he turns up every once in a
while, mostly 'preying' on Sebastian (with whom he is madly 'in love')
or running errants for his boss William. He's the much needed comic
relief of the series, actually.

Be prepared for murder and crime in that case - and, of course, occult
topics (which should be quite obvious from my description, though). I'm
pretty sure there's an English version of the manga around (as I saw a
panel with English text on Demotivational once), but it could be a
scanlation, of course. I don't know whether there's an English version
of the anime around, but if there is, give it a try. 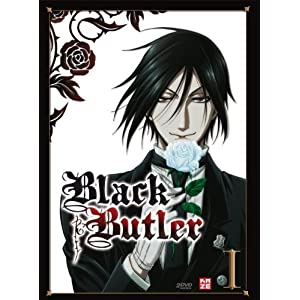 Black Butler Vol. 1, on the front is a picture of Sebastian 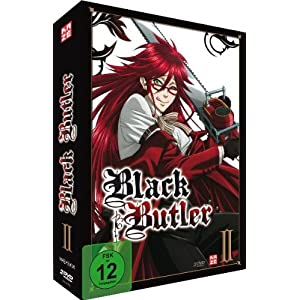 Black Butler Vol. 2, on the front is a picture of Grelle Sutcliffe (with
his first death scythe - he's down to a pair of minuscule scissors in
Vol. 3...)