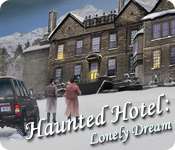 Explore the Haunted Hotel and  experience supernatural phenomenon for yourself in Haunted Hotel: The  Lonely Dream! Find Hidden Objects as you explore the different rooms of  the hotel and discover spooky secrets.  Collect helpful Inventory objects  to help you progress through the building, and solve tricky puzzles.  Each room brings you closer to the truth in Haunted Hotel: The Lonely  Dream!

Again, this game is a genuine sequel to the previous 2 Haunted Hotel games. Unfortunately in this case, I think it really does matter that we have played the other games in order to appreciate the story. And the story is a part of this game far more than in the others. But it is still a HOG primarily, although we are introduced to the use of inventory here, as well as a sense of movement, and there is a greater number of puzzles. We have also done away with points, and time limits.

We start this story at a time after the FBI agent’s arrest of the priest, who seems to be behind the strange supernatural events and phenomena found in the Lonely Dream Hotel. However, an ex-cop time travelling private investigator says we have been duped and must return to the hotel to prevent catastrophe for those still residing there.

We are expected to do a little more of the work ourselves in this game. Some of the items we collect from the HO scenes go into inventory and we will need to use those items later, usually to unlock a puzzle or HOP. The rooms were the HOPs, with 12 items needed. Some HOPs actually don’t have a list. You have to find an item by the gears cursor or by merrily clicking and then find the place to use it. Something a bit different! The puzzles were still easy, but I found myself not knowing what to do next far too often for my liking. A hint that gives you the next step is useful.

The cut scenes are comic style, no animation, with dialogue down the bottom. The graphics are good enough, but are nothing unexpected, and I think the second game was better in this regard. Again, the soundtrack can be a bit unsettling at times.

These first three games in the Haunted Hotel series are classic examples of the history and evolution of HOGs, with this one hinting at the possibilities of true HOPAs.

A good game, but dated of course. Nevertheless, ...