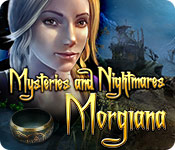 You awoke in an abandoned castle on a cliff, not knowing who or where you are. But is this place really abandoned? Fireplaces are still burning, strange voices echo, and wild magic is seeping through every wall. Step by step you unravel the mysteries of the castle, the art of crafting magical artifacts and even the forgotten secret of traveling to entirely different worlds! As you discover clues and put them together, your memories come back to you and you find out the hidden mystery is much more personal than you thought in Mysteries and Nightmares: Morgiana.

I liked having a quite different style of graphics in this game. It is a shame it is not available in widescreen, in this day and age, but the videos aren’t bad, and the artwork quality is decent. The intro is different, I loved the way we moved around for a 3D inspection of the environment. In reflections and dark spots, the evil sister? , if that’s what she is, can be seen, in a variety of translucent flashes. It is done very nicely. Sounds are good, including the voiceover. The special effects sound for picking things up was a bit trying though, and you have the option to mute the game.

You go to sleep. When you wake you have no idea where or who you are. And the intelligent talking mouse you rescue is no help. Not at answering these questions at least. You are in some kind of weird abandoned castle, although there are many signs that there is someone around. The magic room you find allows you to create magic tools for use in overcoming obstacles, and so you make your way through the castle, trying to solve the mystery of your life and family.

This is a fairly standard interactive HOP and adventure game. The HOP scenes are clear and require some form of interaction. The puzzles are interesting twists on familiar ones, and not too, too difficult. The hint does NOT give you directional assistance, but the interactive jump map tells you where there is something to do right now, if a scene has been cleared, and where you are. As well, a gargoyle that is part of the inventory panel, has eyes that glow when you are in an area that has actions to do. You also have a list of tasks to perform, and with it are the notes you take of what is going on.

The various magic items you create seem to stay with you at least for a while, and give you useful powers – such as a levitation spell. That mouse also stays.

It’s a good standard edition game. I won’t hesitate to use a punchcard coupon code on it. But it is not a masterpiece of the genre, and it would be a bit harsh to judge it against some of the excellent CE games we have had recently. It is simple, mildly different, and not too trying. It’s major weakness is that the action is a little slow.

I demoed this and I must say,   I think its rather a little gem of a game.   I like it.
I already have figured out who is behind it all  (that is a no brainer---but I have
noticed that,   in games,   little miss goody-two-shoes is usually slow on the
uptake).
Mommy and Daddy are definitely responsible here.
Sponsored content