Nightmares from the Deep 3: Davy Jones

Nightmares from the Deep 3: Davy Jones

Nightmares from the Deep: Davy Jones 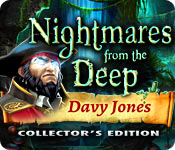 Brought to you by Artifex Mundi, the creators of the Enigmatis series and Grim Legends: The Forsaken Bride.

After discovering mysterious notes confirming the truth of the Davy Jones legend, Sarah calls a press conference to reveal to the whole world that the old sea-devil and his mythical treasure are real, hidden away on a mysterious island.

Suddenly, the galleon of the infamous pirate appears on the horizon, and Davy Jones himself breaks into the museum to kidnap Sarah and her daughter.

Both Sara and her daughter are thrown into the brig of Jones' ship. They manage to escape, and while searching for a way back to shore, they discover dark secrets about the ship's otherworldly origins. But before they can escape on one of the lifeboats, they are caught, and to save her mother, Cory agrees to a sign a dark pact with Davy Jones...

FIRST IMPRESSIONS
Delightful! We are immediately immersed in the continuing story of Davy Jones and the woman who has been determined to dig up the evidence of his existence as a true historical figure. It is her presentation on the subject that Davy Jones himself interrupts in typically overwhelming fashion. The early cut scenes are splendid! I started to get vertigo, swooping like that!

If you’ve not played the previous Nightmares Of The Deep games, you’ll have no reason to know why this particular woman is making this particular speech, but it matters not at all. Our battle with Davy this time is direct and immediate. Of course, if you have played those games, you’ll know this is not the first time we have interfered in Davy’s business.

SIGHTS & SOUNDS
Amazing colours, sounds and special effects characterise this game. I love how colourful everything is, despite the darkness of many locations. Sea urchins that are almost iridescent. Glowing seahorses. Flowers of such rich and vibrant shades you’d never be able to name them all. Heck, even the skeletons looked cute! And very clearly detailed HOP scenes. Which is important because some of the scenes are quite dark.

The music is wonderfully ominous and foreboding. Mostly quiet, it is subtle and often consists of single, wide-spaced notes. There is a piano track that is particularly nice. The background noises are what you’d expect, wind and rain, sounds of the waves and the creaking of wood when on board. The voiceovers are tremendous, very appropriate, excellent acting, and lip synched!

WHAT’S HAPPENING?
We are the museum’s expert on Davy Jones, a reputation earned in the first two Nightmares of the Deep games, through our adventures. Still, no one living has set eyes on him, and many still say he is mere myth and legend. You are about to make your speech, in which you present the evidence of his historical existence, when what do you know?! The legend himself arrives in a high dudgeon, demanding that we keep silent about his personal business. Guess that is a pretty persuasive piece of evidence for our theory!

Unfortunately, our “theory” kidnaps us (and our daughter), throws us in the brig, and starts for home. Despite an ingenious escape, we are soon recaptured and Davy Jones tricks our daughter into signing the fateful pact, like thousands of others before her, and now she cannot escape him unless the contract is fulfilled. But even Davy has long since forgotten what it was that fulfilled the contract!

We learn the somewhat confused and confusing story of David Jones’ good luck and dire curses through the means of ancient “guardians of Davy’s memories”. What they will reveal to you, through a sepia toned cartoon, is the true reason for the rampage and evil that Davy has wrought across the centuries. This gets more convoluted as the game progresses and I wish it had been better told.

GAMEPLAY
Plenty of variety here. There are several types of HOP, including progressive silhouettes, interactive word lists, and fragmented object searches. Some scenes are visited twice, but using a different search pattern.

Also, there is a straightforward mahjong game that you can use as an alternative. The mahjong annoyed me a bit, because in order to get the last item on the list, you had to find the golden pair of tiles that are chained up until all other tiles are used. That would be fine, except, if you swap partway through the list, you must start from the first tiles. Consequently, you really can’t, from an efficiency point of view, find that last object that is always the hardest to find. You know the one I mean, there’s always one.

There are a bunch of mini-games and puzzles. They range in difficulty from delightfully easy to frustratingly hard. I was unhappy that I had to skip a couple of them, because I just couldn’t make head nor tail of them The adventure component is the focus of the gameplay, and I had a lot of fun with it. You have an interactive jump map, a directional hint, a journal I found basically useless, and a task list.

COMBINED IMPACT
I loved this game. The colours and the characters in particular impressed me. This is my favourite of all the Nightmares of the Deep games. Although, you couldn’t go wrong with any or all of them.

BONUS CHAPTER
For once I remembered to note the time, so I can tell you it took me exactly 75 minutes to complete the bonus chapter, which is an epilogue to the main game. It is not necessary to the main story, which ended nicely. This is just an extra adventure. It includes almost all new scenes, some where the old scenes used to be. The puzzles and HOPs are all new. Most of the types of HOP found in the main game are represented here, but I felt there were too many fragmented object puzzles. Mind you, I personally dislike this HOP type, so it may just have been too many for me.

COLLECTIBLES
There are 3 types of collectibles. None of which I managed to find all of. I was 2 short on each. There are 10 pirate cards, 12 glowing seahorses, and 24 puzzle (jigsaw) pieces.

ACHIEVEMENTS
The achievements are delightfully represented on various parts of the galleon. There are many of both performance and story awards. There is one you might look out for, regarding interaction with the animals of the island. No, we don’t rescue any, have any pets or anything so involved as that, but...

REPLAYABLES
There are 11 replayable HOPs. They are presented as interactive word lists only.

I’d have to say, while the game itself is a clear 5 stars, the bonus content is not all that impressive. I mean, why have us collect 24 puzzle pieces, and then just present us with the finished picture? However, it is enough to justify the CE to those who lean in that direction anyway, but I could have been just as happy with the SE.
luvtoread

I honestly did not know there were collectables in the Bonus.   I really enjoyed this game.
Got it at last BOGO,  so definitely a deal.
JustTheFacts

me too. and yes, a definite deal! Now off to play the other half of said deal - Surface: Reel Life

I hate it when developers all put out a game about the same thing at the same time. Did Elephant actually time this deliberately to coincide with Final Cut 3? Argghh!
JustTheFacts

OH! I just watched MIB 3 last night for first time! Loved it! Was not as funny but fun, if you get my drift.

I love both of those actors. I can never remember the white guy's name. Although I know I know it.

Anyway, am a fan too.
luvtoread

(you could probably guess from my avatar how I feel about him!)

I have watched all 3 MIB's several times.  Really fun and funny stuff.
JustTheFacts

I knew I knew his name! He is so funny in the MIB series, and yet he was never in a comic role before. I remember being really surprised when he showed up next to Will Smith - who's not an unattractive fellow himself lol.

It's all that strong and silent and potentially lethal stuff that is Tommy Lee Jones' appeal, I think.
Sponsored content