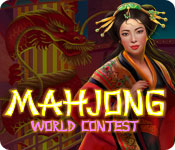 You've been invited to take part in the World Tournament of Mahjong! Complete over 100 unique levels of varying difficulty and dynamics to gain experience and earn points. Improve your rank and progress through the game hierarchy. Become the best Mahjong player the world has ever seen and win the master title in Mahjong: World Contest!

This game looks good. Nothing flash, but colourful and lively. I like the imaginative locations, which represent a casino style setting with a Chinese flavour. I also appreciate the cleverly designed “contest” rules. Working your way up to the top is going to take skill, speed and dedication.

There are six rooms, each representing the next stage in your progress to the top, each with 10 boards. All boards are doable, not fantasy configurations. To gain access to a room, you must have achieved, on each of the boards, a certain value on 3 different measures:

1. Removed a certain number of gold tiles
2. Received so many points
3. Completed the board in a set number of moves

The mahjong play itself tends to classic, except you are allowed to shuffle – as often as you wish. The tiles come in 3 styles.

This is a more challenging game of mahjong than the others I have played on Big Fish, and I think I would probably be unable to get very far. But for a seasoned player, this might be just the thing to liven up the game.