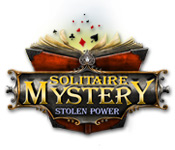 The oldest deck of cards in the world has been stolen from the Museum of Ancient History in Solitaire Mystery: Stolen Power. Track down the missing deck and save the world using the magical cards. Grab the cards before they fall into an evil villain’s hands! Search amazing Hidden Object scenes as you try to complete the deck to unleash the powerful magic contained within. Use the cards for good in Solitaire Mystery: Stolen Power!

FIRST IMPRESSIONS
The visual quality of this game leaves a lot to be desired. But otherwise, it opens the way most of the older style Hidden Object games would. An intro to the story, followed a HOP scene, in this case collecting some cards. Then, we consult the cards and begin the solitaire part of the game.

SIGHTS & SOUNDS
Not much to look at, the backgrounds are part of the story, so that we get a 3-set pan of the museum covering several rounds of solitaire. They are clear enough, in the pseudo-realistic style of an older game, but not detailed or interesting. The music is pleasant and unobtrusive.

WHAT’S HAPPENING?
A magical deck of cards has been stolen from the museum, and with the help of YOUR cards, you are searching for them. First in the museum where they were stolen, and then at various other locations decided by the clues you pick up. The story is told too slowly, though, to really enjoy it.

GAMEPLAY
The HOP scenes include finding multiples of one item (e.g. cards) or find the items by silhouette. The solitaire games come in two types, the standard match-one-up-down, plus one where we must find pairs. Neither game is entrancing. You play a HOP in each location and have several rounds of each type of solitaire between.

The cards themselves are ordinary, the games have only 2 spreads, one for each game type. The objective is to get to the special ‘magic’ cards in each deck, not clear it, so strategy is a bit different. There are some “power ups”. In the HOPs, you find inventory items that can be used in the solitaire games. For instance, a duster, which is then used to clear cards that show up dirty. I thought this would be nifty, but it turns out to be a pain, because it disturbs the flow.

There are a limited number of cards in the deck, and the spreads are both designed so only a few cards are face up to begin. This results in less chances of winning the round, and in fact, after the first few, it was taking me several attempts to move on to the next level.

COMBINED IMPACT
Okay. I wasn’t overly impressed because there are truly beautiful games out there that are easier on the eyes and more varied in the gameplay. However, this and the next Solitaire Mystery are the only games I know that combine HOPs and solitaire. Only if you really want to play that combination would this game be worth it.

For the rest of us,

JustTheFacts wrote:hope i did this right, i saw you had it listed with 2, but no link, so I assumed you don't have a thread for it.