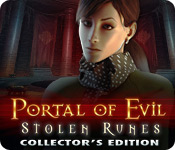 The gates to another world will open soon! You can stop the impending disaster - if you track down the stolen runes! Vanessa is the only heiress of Abraham Van Helsinga, a member of the secret order of light guarding world peace. And now  she has to find the stolen runes that were sealed inside the gate, behind which lurks an ancient evil.

First, the INTRO really gets your attention in this game, and the ATMOSPHERE of tension and fear continues even once things quiet down.

While I remember, the MUSIC & AMBIENT sounds are REALLY ominous, and some of the best I’ve heard, adding to the tension. There are muttered incantations, moans, organ music. The GRAPHICS also depict some FRIGHTENING stuff, and are very PHOTOREALISTIC and clear.

Because of the nature of the game, though, they tend to be A BIT DARK. Not all the time, but enough to be noticed.

The STORY has us off to rescue our GRANDFATHER, who is a member of the ORDER OF THE LIGHT, and has taken off through a PORTAL to other worlds in order to recover ANCIENT RUNES that are needed to seal the PORTAL OF EVIL. These have been stolen and are now scattered throughout the MANY WORLDS. The first one is quite creepy.

As we travel, we will meet characters whose allegiance has to be questioned at this stage, we just can’t be sure of anyone. Our grandfather manages to send us MESSAGE CAPSULES from wherever he is, I never figured out how, giving us CLUES & BACKSTORY. These are COLLECTIBLES of a sort I guess.

The GAMEPLAY is balanced fairly EVENLY between HOS and PUZZLES. Based on the SG demo, this balance continues the whole game. There are 2 KINDS of HOS, INTERACTIVE LIST & MISPLACED OBJECTS. The PUZZLES vary in difficulty, but overall were NOT VERY HARD.

There seems to be a FOCUS on the ADVENTURE component of the game, but it is not too difficult. The MAP gives ACTIVE ZONES and allows you to JUMP there. The HINT is DIRECTIONAL.

From the SG CONTENTS PAGE I got the impression this game is fairly long, plenty of CHAPTERS, but on closer examination, the chapters are each QUITE SHORT, and now I realise that so is the game.

I decided to wait for the SE on this one, and I am glad I did. I’d have been disappointed if I’d paid CE price for a game as SHORT but INTERESTING and NOT AMAZING.

As a SE, I think this game is just right.

Options include separate sliders for music, sounds and ambient audio, screen resolution, custom cursor, and two difficulty settings.  Basically the only difference is that there are no sparkles in Expert Mode - even to indicate HO scenes - and there is a longer charge time on skips and hints.

If you want all of the achievements, you can still use the hint button in general gameplay, but there are achievements for using no hints during HO scenes and for not using the SKIP button.

Be on the lookout for messages from Grandpa during your play-through.  They ARE miss-able, which I sadly didn't realize until too late :p

Character models are stiff and not the greatest quality, and the same can be said for the voice actors, but that is par for the course with IHOG's in general.  The gameplay graphics vary between very nice and stunningly-beautiful, though the cutscenes are too lacking-in-definition to make for good screenshots (totally spoiled by Hellblade!)

The HOS are nicely-spaced with adventure gameplay, for the most part, with a heavy emphasis on adventuring.  The hidden object scenes themselves are played twice:  Once via list, and the other by placing items where they belong (ie. cork goes in a bottle, knight goes on a horse, etc.)  In both cases there will be a zoom-in scene where extra items are hidden.  During the list version, items in blue are hidden in the zoom-in area, while those listed in red will be something interactive you have to complete, first.

Puzzles are nicely-varied, and though they start out insultingly-easy, they do ramp up in difficulty as you progress.

Music is very nice, and nicely-dramatic.

The Bonus Chapter is the true ending to the game, and continues the story from where you left off in the main game.  Overall the game took me nearly 6 hours to complete - something I don't see in casual games much anymore.

There's nothing groundbreaking about the game, but the graphics are lovely, the story interesting and gameplay entertaining enough that I thoroughly enjoyed myself whilst playing.  I consider this to be a quality offering for a great price - especially right now at $0.49 (at Steam)!
_________________
Never be a prisoner of your past.
It was just a lesson, not a life sentence.