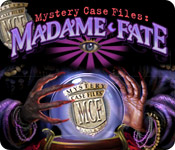 Madame Fate, a mysterious fortune teller, has foreseen her own demise  at midnight this very day. She has asked for your help in investigating each quirky carnival worker to determine their whereabouts at midnight. Your investigation will include a multitude of fascinating  personalities, from Art the Carny to Lucy the Bearded Beauty, while  exploring the magical world of Fate`s Carnival. Each suspect has a  motive, but only a Master Detective can discover the secrets hidden  within Madame Fate`s crystal ball. 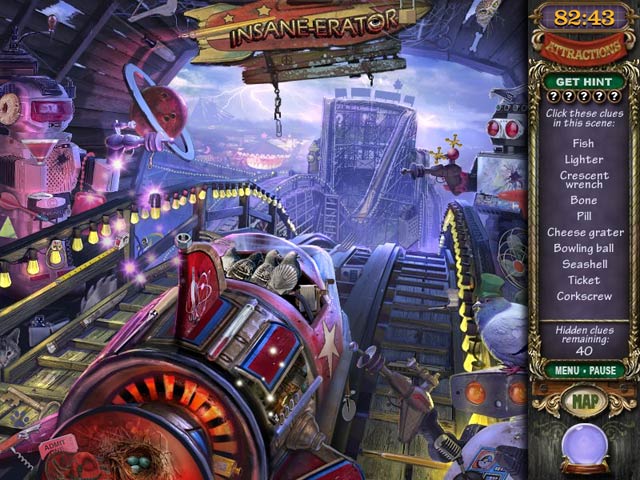 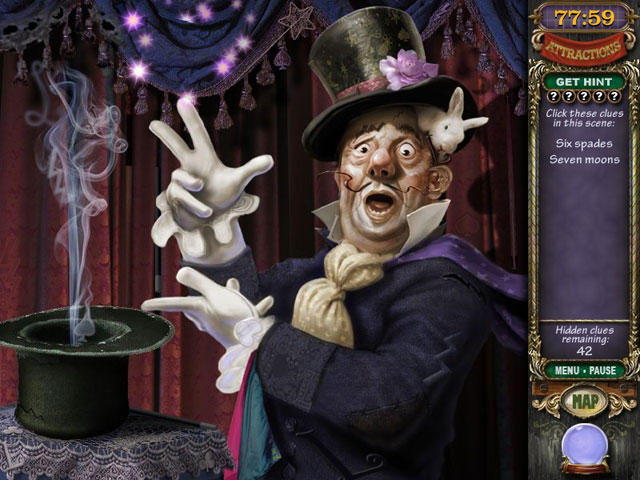 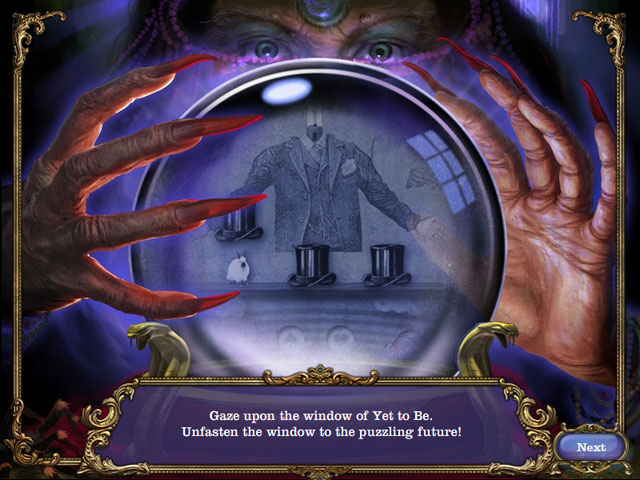 
FIRST IMPRESSIONS
I know it’s sacrilege, but I have to confess that I don’t much like any of the MCF games, even though I own them all. They make me feel inadequate. I totally do not get their crazy puzzles! Even the HOPs are hard! That doesn’t mean however, that I don’t see why these games are so popular – for the very same reasons I hate them. Of the earlier games, I think Madam Fate is the best. Innovative, challenging, original. I recognise the quality of the gameplay, even if it is so dated now.

SIGHTS & SOUNDS
Graphics are bad, as you'd expect. The game is years old, and the standard is low enough to affect my ability to see objects. I did like the cartoon characters, where you must find multiples of items. Ambient noises are great! You never for even a moment forget that you are at a carnival. Madam Fate’s voice is good too.

WHAT’S HAPPENING
Madam Fate has seen her death is at midnight tonight and she hires you to find out who will kill her by predicting where they will be at that time. A kinda hunt for future alibis. You do this by getting near enough to where they’ll be by finding relevant items and getting Madame’s crystal ball to show us.

MAKING PROGRESS
In order to eliminate the innocent carnival workers we must collect dozens of hidden objects in a half dozen HO scenes. There is no adventure, tools or travel. The HO scenes, when finished, lead back to the menu where you select your next effort. Some of the scenes have another set of scenes within them. Some also have puzzles, and sometimes strange special effects that you have to work around.

Once you have completed a level/chapter out of the 15 required to complete the game, you will get a puzzle involving multiples on a cartoony “carnie”, then it is time for one of the crystal ball’s puzzles. Which are impossible to solve – even the word based ones! Obviously that’s not entirely true, but the non-word puzzles were totally unfathomable. Would it have killed the developers to have at least given us instructions?

The one easy thing about this game is the ‘timer’, which gives you oodles of time to nut the puzzles and HOPs out, but I never lasted to the end of that time. I’d bail out with 45 minutes still available! I also found myself getting bored with the whole thing. There was a monotony to the constantly returning to previous HOP scenes.

FINAL VERDICT
I have mentioned that I don’t like this game, because it was simply too hard for me, but another player, with greater patience than I have would really enjoy this game. It is, even today, a great game for HOG play and puzzles – but the graphics do interfere with the game’s appeal, so it loses a star.

If you like a challenge, this is probably right up your alley.

Options include separate sliders for Music, SFX and Environment.  Choice of difficulty between Detective Mode (timed) and Relaxed (which will give you extra time).

NOTE: The Steam version will NOT go full-screen unless you change your desktop resolution to 800x600.
-- Consider getting this one directly from Big Fish so that you can view the game full-screen.

Ah, the HOG's of yesteryear, when the games were truly a challenge, and items were really well-hidden.  Revisiting Madame Fate - the game that originally drew me into the world of hidden objects - was a real eye-opener.  The scenes we scour aren't just junk piles... Sometimes it's hard to tell that they are HOS at all!  Some of the items are beautifully-hidden, and truly hard to find.

Madame Fate has foreseen her own demise.  Collect clues on 15 employees at Fate's Carnival, and help her find the culprit before it is too late!

For each carnival worker, you will search multiple scenes until you find enough clues to present to Madame Fate.  If you're having trouble with one location, just go to the map and jump to another location for a while. Some locations have zoom-in areas that have their own full-length lists.

There is some light interaction at times (ie. put the puzzle pieces in place before you can collect it), and other times you'll need to find 10 of one item.  While you're sleuthing, keep an eye out for morphing items... When you collect enough, you'll unlock new locations!

FINDING MORPHING ITEMS WILL EARN YOU A HINT if you have less than five available.

In this fourth installment of the MCF series, you can at last find multiple items in succession... As a matter of fact, finding items quickly back-to-back will net you a time bonus!  Woo woo!  Be careful with rapid misclicks, though, as you'll earn yourself a time penalty.

For each staff member you investigate, you'll do one word puzzle-type of game, as well as a modified "door lock".  Unlike Ravenhearst, these puzzles are actually really difficult - you're going to have to use your brain to figure these out!

The graphics are bright and colorful, and the cast of characters comically memorable.  Madame Fate interacts with you often, and her voice acting is very well done.

This is not an easy game, but I highly recommend it to those who enjoy challenging themselves.  Use yer brain, eh!
_________________
Never be a prisoner of your past.
It was just a lesson, not a life sentence.