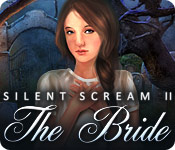 Jessica would never imagine that her big day would turn out to be a nightmare; they had an accident and Jonathan McNealy, her husband is  missing. Things just got more and more bizarre when she encountered a mysterious girl who seemed to be leading her to Jonathan. Jessica  had a feeling that the girl was connected to Jonathan. Did she cause the car accident in the first place? Return to the abandoned mansion and search for clues in Silent Scream II : The Bride.

I really enjoyed the first game in this series, Silent Scream: The Dancer.  It was dark and eerie, with an interesting story, good gameplay, and strangely-skewed perspectives that were both surreal and evocative.  A lot of people, however, were put off by the graphic style, and I was disappointed to see that the devs went more mainstream with the graphics on this one.  I will therefore treat this as a STANDALONE game.

Options include separate sliders for sound effects, music, environment and voice.  We also have full-screen, custom cursor, and a button keep the aspect ratio.  The game automatically adjusted for my widescreen, and looks quite nice stretched.

There are two difficulties to choose from:  "Thrilling" and "Nightmare."  In other words, Normal and Expert.  Sadly, whilst the expert mode has no sparkles, it also has no skips or hints, and since this cannot be changed once you start playing, I went with the normal mode.

The Tutorial is optional.

We have two tabs on our task bar:  Inventory and Objectives.  Inventory items will sometimes need to be merged before they can be used.

Using a HINT during the adventure portion of the game will give you wisps of smoke in the direction you should go, and does not discharge your hint.

The HOS are lightly interactive, with a single item per scene needing an additional action before you can collect it.  There is NO misclick penalty (at least not in the mode I'm playing.)  As for the HOS themselves, they're your typical junkpiles.  It looks like the devs were using clipart, as you can see that many of the items repeat across the hidden object scenes.  For example, the meat tenderizer looks the same no matter which HOS you're on.  These scenes are not overly dark, nor are any of the items tiny, so that's a plus, at least

The mini games are nothing new, but something that I really like about them is that they have reset button -- always nice -- and even better, a hint button which will actually give you... wait for it... HINTS about how to solve the puzzle!  Imagine that!

It doesn't tell you outright, just gives you pointers.

The game is HO-heavy, but I was surprised by the freedom of movement that we have.  As with most games of this type, we are limited to a certain area for a while before we can move on to the next area.  UNlike the games we're used to, we can choose where we go in each area, making the game less linear -- something I really appreciate.  In one area, there were FIVE exits, and ALL of them were accessible from the moment we stepped in the room!

Some of the graphics are OK... and some of them are truly beautiful.  I really would have liked to have some of the scenes as wallpapers.  I had to travel back to revisit some of them before I finished the game, just wanted to see them again~

Our journal stays open to the last page we had it open to.  When new information is added, we have to manually advance the pages to see the new entry... which is GOOD, because there are occasionally spoilers in there, so it's best read after you've figured things out in your current area.

There are nine movies, all of which can be replayed from the main screen once you have seen them in the game.

As I mentioned, the game is HO-heavy, but the further you go, the more adventure elements you come across.  Despite the HO's, I really enjoyed the gameplay, and that is due, in no small part, to the story.  The more I learned, the more I wanted to know.  One surprised followed another, and the end of the game took me completely by surprise!  I had an inkling of what was going on in the first game, but not so in The Bride.  Yes, yes, I know I was going to treat this as a standalone game, but I couldn't help wondering if the storyline was going to go along the same vein as in The Dancer.  Let's just say that the games can't be compared

I was not happy about having to have sparkles in the game, but I still REALLY enjoyed the game.  I think that the next time I play it, I'll do the expert mode.  I was afraid of getting caught  and having no way out (via hints/skips,) which is why I chose normal mode to begin with, but it turns out that all of the puzzles were doable.  There is no walkthrough for the game, but you really don't need one in normal mode.

Overall, I highly recommend giving this game a try, especially if you enjoy a good STORY!

Not Inspiring, But Not Bad Either ***

The demo took me 45 minutes of relaxed and pleasant play, and in that time I did a heap of slightly interactive HOs, so I’m guessing that the emphasis will be on those. The HOs are exceptionally clear, large and bright, which didn’t stop me needing a hint now and then.

As others have mentioned, this doesn’t seem like it will be memorable, but I do believe it will be enjoyable and reasonably interesting. The story for the length of the demo went very slowly though, little actually happened, so it may not be edge-of-your-seat stuff. It will go on my “punchcard filler” list, which means I’ll buy it eventually.

For the record, the original Silent Scream was absolutely nothing like this and absolutely awful to play.

Here's one where we totally disagree.  I loved both of the Silent Scream games, though they were entirely different from one another.
_________________
Never be a prisoner of your past.
It was just a lesson, not a life sentence.