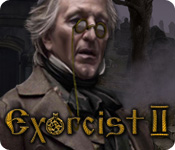 Take up the cross and slip into the role of a young exorcist on his first solo battle with the forces of evil in The Exorcist 2! Can you save the soul of a possessed girl and lay bare the secret behind the evil curse? The Ghostfighter estate seems to be the center of a cloud of diabolical deeds... Could your former mentor really have fallen victim to demonic seductions? Unravel the mysteries of the mansion, but be careful not to stray too far from the light in this incredible Adventure game!

Garret Ghostfighter Is In Trouble!

Do you remember our friend Garret Ghostfighter, from the original Exorcist game? It doesn’t matter if you don’t, you’ll meet him here, but it was good to see him in his prime, because we are certainly not seeing him at his best here.

The STORY. We are Ghostfighter’s humble and earnest pupil Jacob, venturing out on his own exorcisms at last, when we discover our old mentor seems to have succumbed to demonic temptation! No, impossible!, we cry, and we’re off to the rescue.

Like its predecessor, Exorcist II is a quirky game, though not as different as Exorcist is. The major part of this one’s eccentricity is in the STORY, which develops in quite unforeseen directions.

Its opening moments also reveal much improved GRAPHICS, which are exceedingly WELL DONE, even to including a side panel for WIDESCREEN. ANIMATION now plays a large part of the VISUALS and is wonderfully done.  The DEMONS are masterly imagined and depicted.

The game’s first and greatest asset is the VOICEACTING and AMBIENT sounds, which are fun for their own sake, and the SATANIC WHISPERINGS throughout the game definitely ratchet up the creep factor. Jacob’s (our) VOICE is so earnest and somehow innocent, one wonders how he manages in his world of demons and devils.

Primarily, this is a HO GAME, so don’t expect too many PUZZLES, but what there are, are FUN & SOMETIMES TRICKY.

The ADVENTURE component is a greater part of the GAMEPLAY than the previous game, and you will need to brush up on your DEMON DISPELLING TECHNIQUES, or you’ll end up like me, asking a DIRECTIONAL HINT for, well, directions, far too often. The JOURNAL can be of some help with that. Unfortunately, NO MAP, although, really, there are not a lot of locations.

The HO SCENES are INTERACTIVE LIST, very clear, but the ITEMS are sometimes VERY SMALL.
I thoroughly enjoyed this game, was very much caught up in it almost immediately, but for me it did PLAY SLOWLY. I suspect, however, that was just because I couldn’t seem to get my head around the LOGICAL FLOW of the adventure.

The exorcist in this one is so adorable! I chuckled quietly every time he spoke!
Sponsored content