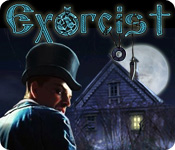 Garret Ghostfighter was born with the gift of being able to see demons! Help him use his gift to defeat the evil Mephisto in Exorcist, a mysterious Hidden Object Puzzle Adventure game. After receiving a mysterious letter from Mephisto, Garret sets off to find the evil being, and defeat him once and for all. Discover cursed locations and remove the traces of evil before it’s too late. Help Garret catch Mephisto, and learn the truth about the love of his life, Margo.

I must say I'm a bit surprised that I didn't see more of a buzz when this was first released.

Exorcist is an interactive hidden object game with an interesting story and nice graphics. The voice overs are very well done, and I love the font (style of writing) they chose to use during the cut scenes.

The hidden objects are all story-appropriate, and some are devilishly hidden. Impossible? Not enough that I was totally frustrated. Definitely difficult to find sometimes, though. Find items on a list, occasionally by sketch (more than a silhouette, but not quite a picture of the item). Puzzles and interaction throughout.

This game isn't as straightforward as some IHOG's. You have to figure out what you're supposed to be doing sometimes, and I like that - makes you think

Once you get the hang of what the developers are trying to do, it gets easier and more intuitive.

Formulaic in that you skip between three scenes, then move on to a set of three new scenes. Movement is done via clicking on a picture of the location you wish to go to or by using the "footsteps" cursor.

Something different that makes you think, nice environmental combination of graphics and sound effects and eerie without being disturbing. A solid thumbs up from me

I purchased after the first chapter.

I've since played through the game in its entirety, and I loved it. I definitely think this game deserved more credit that it got when it was released.
JustTheFacts

I have some odd games in my collection, I’m something of a fan of the unusual, and this one rates very high billing on the quirk-o-meter. Its two brothers in the same series are, in their way, also odd, and the three together make a lovely trio of eccentricity.

The STORY is fairly straightforward, at least at first. You are an exorcist, in pursuit of an evil being calling himself Mephisto, who is taunting you by cursing places that have meaning for you, and leaving havoc behind him. You must exorcise his pet demons while tracking him down. So far, so good. Later on, things will get a little weirder and a lot more personal.

Where you first notice the difference from other games is in the INITIAL GAMEPLAY. The gameplay actually EVOLVES as the game progresses, changing a couple of times before you finish.

This is a HOG with a FEW SIMPLE PUZZLES to break up the game. The location you are in is the HO SCENE, with 2 or 3 HOT SPOTS where close ups or puzzles help you get some of the items on your list. The LIST is your standard, slightly INTERACTIVE, although less so than most now.

Sounds straightforward enough, right? Yet somehow when you’re playing it, all this gets very strange, as the LIST changes to MULTIPLES OF, then LIGHT SKETCHES of the items needed. You need to BUILD your demon-fighting equipment from items in the area, and exorcise each one by a different method. And REPAIR machines or other items that have been damaged, while collecting pieces of the clues left behind for you by Mephisto.

Some of the things I really like about this game are more commonly acknowledged positives. There is quite a lot of VOICEOVERS in this game, and they are, in their way, well done. Or well over-done. I always get a kick out of the accents. And the SCREAMS & LAUGHTER are a nice touch.

The GRAPHICS are okay. Nothing to write home about, but on my large monitor they still come up okay. The scenes are mostly static, although the ticket office scene is interesting...

You travel from catastrophe to catastrophe by carriage, and the transition is done very very well.

The game is also quite LONG, as there are many twists and turns in the story and some interesting revelations to come.

If you care for something outside the norm, this is a fine choice!