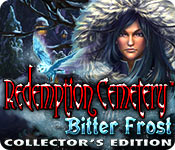 Your house is warm and ready for Christmas Eve when an unexpected visitor magically appears at your window. Your ancestor, the Owl Spirit, begs your help. You must stop the jealous and vindictive Wenonah, the Spirit of Cold, from destroying your ancestors. If she succeeds in her terrible plan, she'll make sure you'll never be born! A photo album is the key to stopping her, but can a mere mortal handle this ghostly task? Travel through time to save your grandparents from her bitter, icy grasp!

'Twas The Night Before Xmas...
And we’re in a cemetery!

FIRST IMPRESSIONS
Christmas Eve, done Redemption Cemetery style, is something a bit different from the rest of the series. Yes, you still do end up in a cemetery, and you do save people, at the behest of spirits who are trying to protect them from the other realm. Just as with each previous instalment.

But this time it is your ancestors you must save, in order to ensure your own continued existence. And our sometimes-helpful raven has departed, leaving us in the care of Koturi, the Owl Spirit, who is our ancestor, and a... Native American(?).

While it breathes new life into a series that had probably reached the end of its cycle, it comes dangerously close to not qualifying as a legitimate follow on from previous stories. The fact that it is a Christmas tale only adds to the alien feel of the game.

SIGHTS & SOUNDS
The opening sequences present a new look for ERS as well. There is something remarkably stylish in their depiction of an unnatural frost, and something of a departure for them from the usual look and feel. It is magically done, and definitely a new peak in artistic terms. I would never have imagined leaving a Christmas story by Elephant to play one by ERS, where the colour and flamboyance would be comparable. If you not familiar with the works of these developers, my apologies for the ‘insider lingo’, I mean merely that my two favourite developers, each exceptional in their artwork, are both now offering spectacle and extravaganza on a new level.

I must say, in music, the Elephant still leads by a long shot. Here the music is nice, for the most part appropriate, but it’s Christmas Eve, where are the carols? Voiceover by the narrator is very good, and the other characters are reasonable. I would have liked to be made more aware of ambient sounds.

MAKING PROGRESS
In this we are more typically ERS. There are two HOPs in the demo, one a simple word list visited twice, with the difference that each item retrieved uncovers a piece of a jigsaw puzzle to be completed at the end of the HOP. There is also the option to switch to a (relatively) difficult Match 3 game instead.

The other HOP is a new design. It is a highly stylized replace objects game, and very cool. There are more puzzles and mini-games, not overly hard at this stage. You have the choice on some to play the casual or hard version. (This is on top of your 3 difficulty levels plus custom option).

I found it difficult to get into the mind set of this game, and so my progress was slow, and relied heavily on the interactive jump map and directional hint. Other features include combining items in inventory, and a magic feather that allows you to enlarge items, for example scissors become garden shears.

CE BLING!
Nothing shockingly new or different here, but nicely done. A generous number of attractive gallery items, plus replayable mini-games (18) and HOPs (11). Plus the SG and Bonus Chapter.

Achievements are prettily depicted, and collectibles are snowflakes, which you use to restore your personal snow globe in the manor of Gardenscapes et. al.

FINAL VERDICT
It’s a good game, just how good I am still not sure. A lot will depend on the developer’s ability to hold on to the tradition of Redemption Cemetery within a different kind of story. For me, one hour was simply too soon to tell.

STRATEGY GUIDE – A bit blurry, but useful.
BONUS CHAPTER
This chapter could have happened even if the main game had never existed, but it follows on seamlessly after the main game. It is quite long, by my standards, yet play time seemed to end all too quickly. I was feeling ambivalent about the game until I played this chapter. It was really fun and left me feeling all warm and fuzzy, and harking back to the opening scenes of the game.

It is structured much the same way that all Red Cem games are: 3 distinct and separate quests. It’s just they were simpler & shorter. They were also a good deal more fanciful. There was a little bit of the main game in the locations, but most were new. The HOPs and puzzles were all new and fun.

COLLECTIBLES
An unknown (but lots) number of snowflakes were available for collecting throughout the game. These could be used to decorate your snow globe with house, lights, tree, snowman (Xmas Eve, remember?). I found it uninspiring. No other cutesy stuff.

COMBINED IMPACT
If I hadn’t enjoyed the bonus chapter so much, I might be feeling a little bored with the CE extras. But that story made up for a lot. It is a big step down from the really excellent CE contents of Redemption Cemetery 4: Salvation Of The Lost.
genkicoll

This is a standalone story

Options include separate sliders for Music, SFX and Voices, Full-screen, Widescreen and Custom Cursor.  Three Difficulties to choose from, or you can go with Custom Mode.  Can be changed at any time.

Wenonah, the Spirit of Cold, had feelings for the Owl Spirit, Koturi, but her feelings were not returned.  When Koturi fell in love with your ultimate grandmother, he gave up his immortality to marry her. Wenoah's rage knew no bounds, and this Christmas Eve she will finally enact her revenge by killing off your ancestors to make sure that YOU will never be born!

The spirit of Koturi was able to freeze time, temporarily saving your life, but it's up to you to save your ancestors... and yourself! 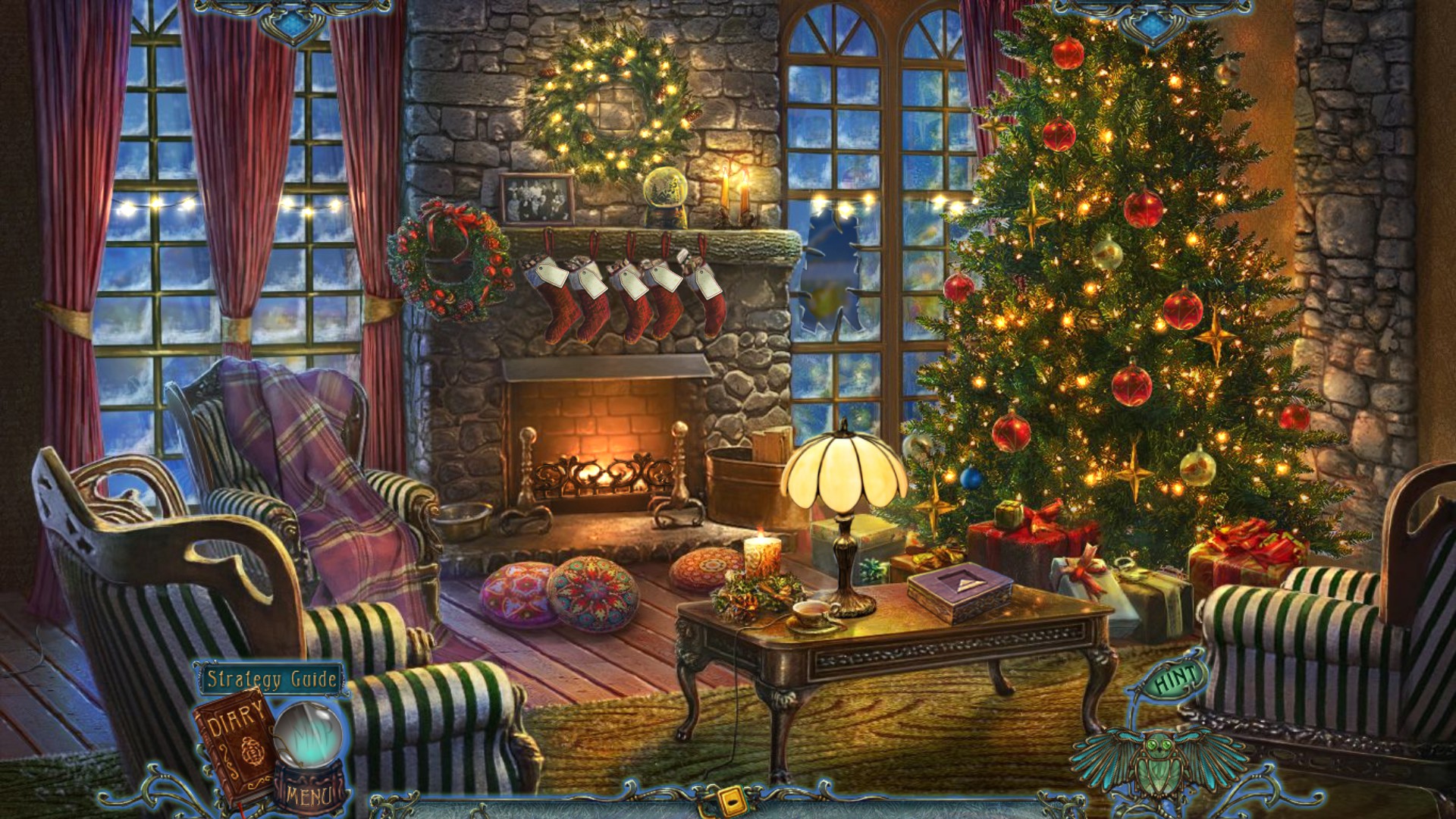 We do have a Journal, but each of the three segments is pretty nicely encapsulated, so you probably won't need the story reminders.

Bitter Cold takes the usual Redemption Cemetery formula and changes it by having you save the living, rather than helping the dead.  As usual we will visit three distinctly different eras during our journey.

Be on the lookout for Collectible Snowflakes as you play.

The MAP is only semi-useful, as the areas where we have actions to complete are shown even if we can't do anything there right that moment.  The insta-transport is of course very helpful, but if you need help, the directional HINT is likely going to be your best bet.

Hidden Object Scenes vary in type, and although you will revisit each scene once, the items you found previously will stay gone.  If you don't feel like doing HOS, you can switch to Match-3 mode... Although this is like no M3 I've ever seen before!  Once you make a few matches, one of the pieces will start to glow.  Match that piece to remove one item that needs to be found. 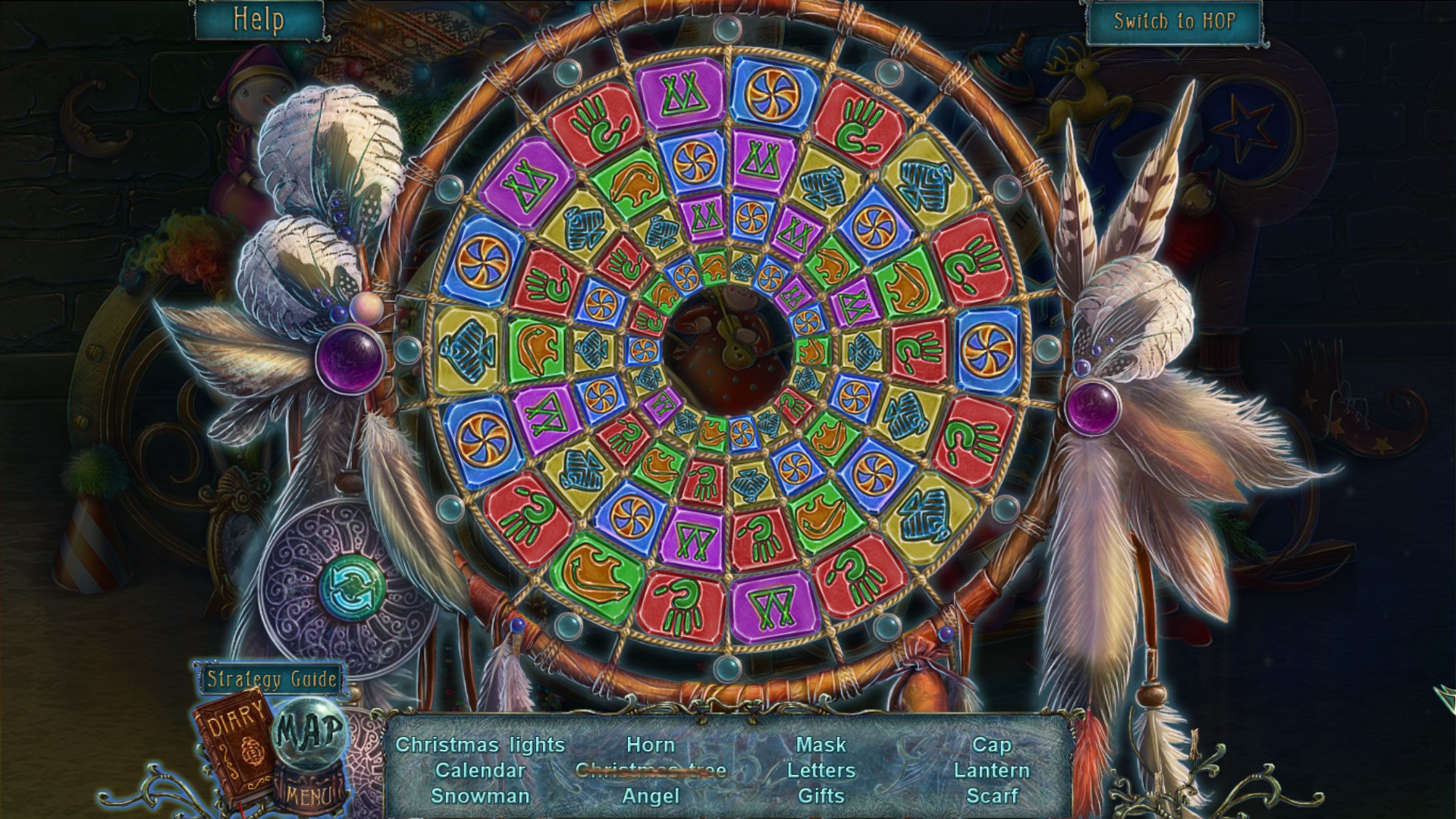 The Mini-games are nicely-varied, and many have the option of completing them in Casual or Hard mode.

I was really impressed to hear actual, appropriate emotion from the voice actors -- they did a great job (although the narrator seemed a bit too chipper).

Visually there are some stunningly gorgeous scenes and I like the character design.

A postman's carriage slipped into the river, and he cannot rest until the packages and letters in his care are delivered.  The extra chapter does not involve any of the characters from the main game (except you), but there are a few familiar scenes along with some all-new areas. 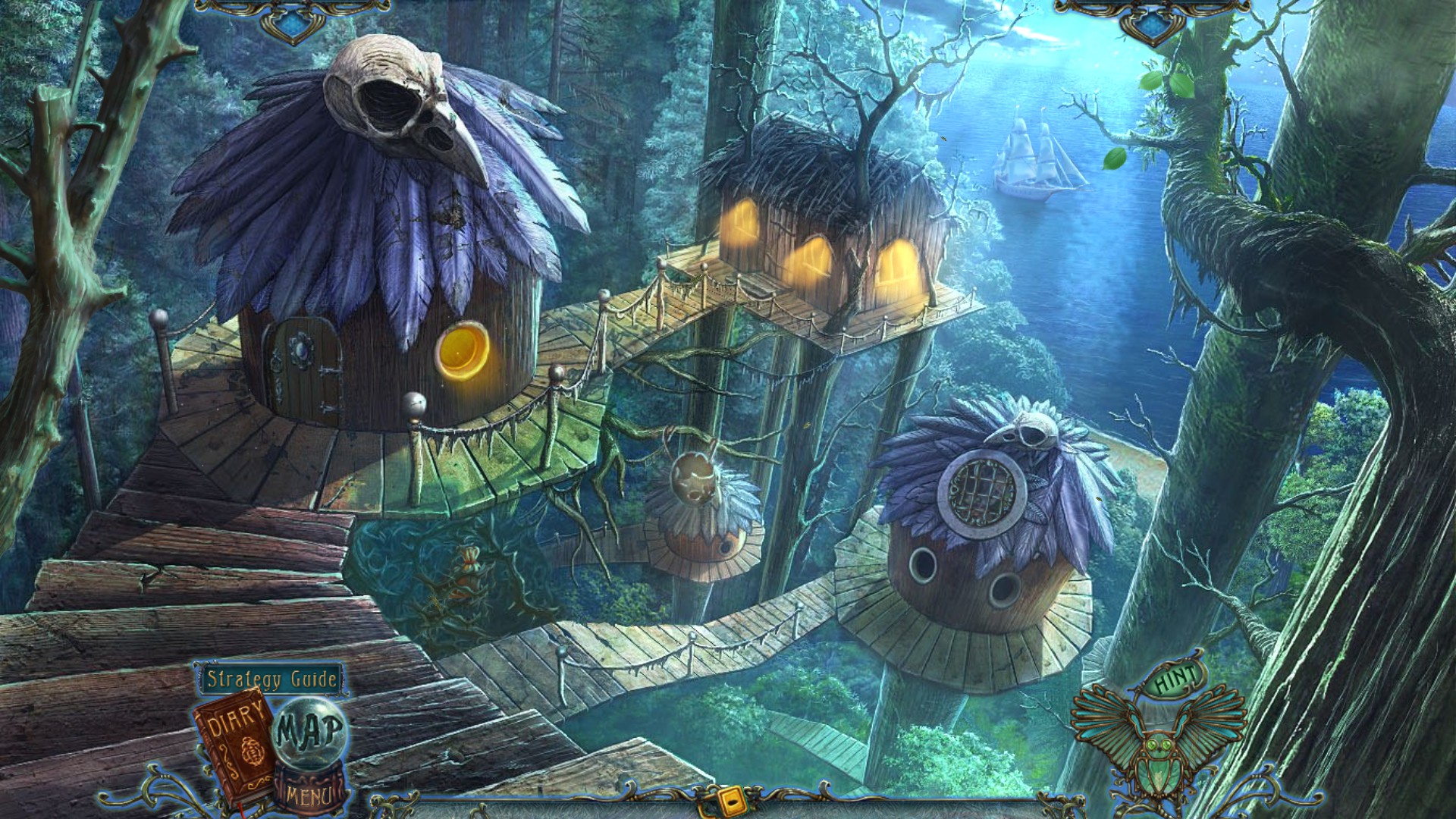 The visuals immediately drew me in, and the main goal of saving your ancestors ties the separate stories -- and the simultaneous Christmas and Native American themes -- together beautifully.  All told the game + bonus took me about four and a half hours, and I enjoyed it all.  Recommended!
_________________
Never be a prisoner of your past.
It was just a lesson, not a life sentence.