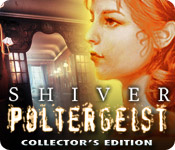 After inheriting a manor in England, you begin to explore the Kangale Estate and discover its history in Shiver: Poltergeist! Ricardo Chellini’s life is incredibly dull and full of repetitive tasks that leave him unfulfilled. One day, however, he receives a letter informing him that he’s the sole heir to an incredible manor in England. Travel with Ricardo to his new estate and discover its terrifying history in Shiver: Poltergeist, an incredible Hidden Object Puzzle Adventure game!

There is nothing that makes this game stand out. It is typical of many haunted house games. It has good graphics and a creepy old house with an angry ghost. It is an OK game for me. I did not purchase this but I would have a year or two ago. At this point I have played so many games like this that this one has little interest for me. That does not mean it is not a good game just that maybe I have played to many of it's kind. I recommend that you try it if you enjoy haunted house HOGs because it may be one that you will like. I did find the firey objects disturbing and that got old for me very quickly (actually during the first HOS). The burning objects were one of the main reasons I quit the Demo and did not buy.
genkicoll

Aww, how disappointing! I loved the first Shiver, and was looking forward to #2! I'll still give it a try for myself, of course... some time when I'm not busy with Glitch.

I will be trying this in April (punch card reasons) as I loved the first one also. I haven't tired of haunted houses yet. LOL!!!
bribling

Well, as I said, I have played a lot of Haunted House games. This is an OK game and may be very good for those who played the first one. There is nothing wrong with it. It is just not for me especially coming on the heels of "Phenomenon" and just before "Hidden Mysteries, Royal Family Secrets" both of which are much prettier.
genkicoll

This is a standalone game.  The only similarity to Shiver 1: Vanishing Hitchhiker is the general look of the graphics and the fact that there are spooky goings-on.

Options include separate sliders for Music and Sound, full-screen, wide-screen, custom cursor, and the ability to change the difficulty at any time.  There are three modes to choose from:  Casual, Advanced, and Expert.  I went middle of the road with Advanced, so no sparkles (except for HOS) or black bar tips on the HOS.

We find a map early on, but it simply shows us the general landmarks of the island we're on, and it sits at the front of our journal, with no other purpose.  As for the Journal, there are four tabs:  Diary, which gives us a little extra story and really no spoilers; Story, which shows us only the document-diary pages that we find during our travels; Task list (self-explanatory

) ; and Photos.  Later during the game, we will find a camera, which will park itself to the right of the retractable (but not lockable) task bar.  Every now and then, the camera will turn towards us and the flash will blink.  This is our cue to take a picture, which will then enter the Photos section of our diary.  WARNING:  These photos are mini-game spoilers!  Thankfully, the photo-taking is optional, so if you don't want to know, just ignore the camera when it starts blinking at you!  Luckily, it's not terribly distracting

We will also find a flashlight during gameplay, and it will be placed on the right side of the task bar to the left of the camera.  We can use the flashlight at any time, but there will be times that it is non-optional, including a couple of HOS.  It's a nice large beam of light, so it's not as bad as it might sound.

The HINT button (assuming that you're not playing on Expert) will give you a directional arrow during the adventure portion of the game, and without discharging your hint.

The devs came up with a way to interact with our inventory that is seldom seen (I can only think of one other game that is similar):  Some inventory items are interactive, and you will know that something needs to be done if there is a box around it with an eye pictured at the top.  Click on the item in your task bar to zoom in and see what you might need to do.  Sometimes it's just opening and looking inside, sometimes it's adding items and doing an actual mini-game!

The HOS are lightly interactive, usually with a couple of items listed in yellow which need to have some kind of action before you can find them.

The story progresses through a combination of short videos and the story pages that we find.  Any cutscenes you've seen in the game can be re-watched at any time via the main menu.  I believe that this is for both the CE and the SE, as the option is not buried in the Extras area.

The graphics and audio were nicely environmental, and the gameplay nicely balanced between the HOS,  adventure, and story portions.  There's a fair bit of to-ing and fro-ing, but it's intuitive enough that you don't have to worry too much about getting lost... and if you do, there's always the hint button to get you back on track

We have a few items that travel with us throughout the game, something that I really appreciate.

I have one gripe about this game, and that is that it had the potential to be truly scary, and they "ruined" it.  We play as a man facing some truly horrifying situations, and he takes everything in stride too casually, as far as I'm concerned.  The devs had a GREAT opportunity to have him react realistically (as in being truly SCARED,) and then become grimly determined because of his circumstances.  The setup was perfect! but they blew it by having him be blasé about everything from the very start.  Meh, I say, meh!

It's a shame that so many casual game developers play it safe in this manner, but I guess dem's da breaks!

I really did enjoy my time playing this game.  Part of that is that it's been a long time since I played Vanishing Hitchhiker, so I wasn't constantly grousing to myself that this one isn't the same.  They really area standalones... BUT, there is one area where I have to draw a parallel, and that is the ending of the game.

Once again, we have a cliffhanger ending to lead us into the bonus chapter... meaning that you only get the true ending of the game if you buy the CE!

That's a dirty trick!  A lot of people liked the original ending of Vanishing Hitchhiker better than the bonus chapter.  As for this one, I'll get to that below.

The strategy guide returns to the main index every time you close it -- it does not stay open to where you left off.

Eight of the nine wallpapers are basically screenshots from the game.

We lose the inventory items that we'd been carrying around during the main game, save the camera and flashlight that are part of our toolbar.  Shucks *snaps fingers in an exaggerated motion of mock-disappointment*

We have all new locations to visit, and this time, taking the photographs give us more story instead of being puzzle-spoilers.

The bonus has a somewhat predictable and satisfying, if abrupt, ending.  This truly is a case of the bonus chapter being the true ending of the game.

I don't feel that this CE was worth double the price, but I (almost) never pay full price for a game, so that's OK in this case.

For those who want to know the real ending, but aren't willing to get the CE, I'm putting the info in the spoiler below:
DO NOT READ IF YOU DON'T WANT TO KNOW!

Spoiler:
After we fall in the water, we make it to the small island where the lighthouse is located.  There we find a small shack, as well as the lighthouse area.  At this point we're wondering how this happened, and who is responsible for Brenda's death.

If you guessed the butler, you're right. (Big surprise

)  Not only did the butler kill the maid, Brenda, but he also killed her would-be spouse (not an accident, nor something the poltergeist of Brenda did), AND Mr. Kangle, Sr., as well... all because he was obsessed with the Kangle family, and the purity of the bloodline.  Brenda died because she would have "polluted" the family line, the son because he was stupid enough to fall in love with the help, and Mr. Kangle because he was going to allow the marriage.

Did I mention that he's trying to kill US now?

At the end he confronts us in the base of the lighthouse, ready to blow us away with a shotgun.  The spirit of Brenda appears, tells us to get out, and the next thing we know, the lighthouse is burning, once more, this time reverberating with the screams of the man who caused the first fire -- the butler.

Good game, I enjoyed it, and do recommend it.  Whether the CE is worth it or not is up to you~

How quickly we forget. I last played this game a year ago, and had forgotten all the best bits. This really is a spectacular HO Adventure. Notice I didn’t say Puzzle, because there are precisely 4 (easy) puzzles in the whole game. But it is certainly as good as any HOPA out there, and for “immersive gameplay” it leaves most behind.

Personally, I was happy to scratch my head over where to get a shovel than pushing buttons aimlessly trying to make them all stay down.

Leaving the sound on is a must for this one. Between the sudden crash of thunder, and the abrupt starts and finishes to short musical pieces, to the hollow ringing of your shoes on the pavement, sound really makes this the true thriller it is.

It is also a mature, professional and well crafted game. First class production values all round. Top quality graphics, and a very involving story.

You inherit an estate in England, complete with creepy butler and ghost, and from the start it’s clear you’re not welcome. The manor and its grounds are huge, with hidden rooms and royal ancestry all wrapped up in a love story gone wrong. Slowly, you piece together what has gone before and work to appeasing your poltergeist.

I loved playing this game, but I must point out one gripe. The ending is designed to hook you for the CE. What is the point? We’ve bought the SE, we’re stuck with it. Those last 30 seconds just frustrate.

It's in my review above yours, Justie! Just click on the word spoiler to see what happened in the bonus play!

I KNEW IT!!!There was something decidedly iffy about him all along!!! Thanks. I could never make up my mind whether to look for the answer at bfg or not.
Sponsored content