Midnight Mysteries: Devil on the Mississippi
by Mumbo Jumbo Games 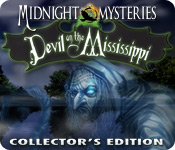 Mark Twain’s ghost has come to you seeking help.  When Twain’s  passion for literary history reignites a controversial debate about the  true identity of Shakespeare, the age-old question resurrects one of  the most evil interested parties.  After waking the evil spirit, Twain  sets about to rid his time of the darkness, but the plot only thickens.   With Twain’s help, you have to unravel the connections to try to set  history straight in Midnight Mysteries: Devil on the Mississippi!

Re: Midnight Mysteries 3: Devil on the Mississippi

One Of The Best

FIRST IMPRESSIONS
I do love this game. It is much more exciting and dramatic than the 2 previous games, right from the first few moments. The intro will make you jump and flinch, and it sets the scene for all the cut scenes that will do the same.

In keeping with the framework of the series, Mark Twain’s ghost (think, Huckleberry Finn and Tom Sawyer) visits you and asks you to help him find a solution to the ancient evils he unwittingly loosed on the world, after publishing a work proving Marlow was “William Shakespeare”. It involves time travelling to Twain’s era, then on to Shakespeare’s time, all on the mysterious ghostly river boat, “Pensylvania”.

SIGHTS & SOUNDS
This series has a signature style to its graphics, and in this game, it works brilliantly. With the greater intensity and drama in this game, the colours – black, hellish green and ghostly blue mostly – suit the mood perfectly. Special effects, including some very dramatic and sometimes downright scary cut scenes, are excellent.

The series also has a signature music score, which is again applied here, and is never overdone. There are no voiceovers, but it’s hard to really notice that. And the ambient sounds are a delight.

MAKING PROGRESS
I love the first scene in all these games – you are in your office (which doesn’t change from game to game), and you receive an unexpected ghostly visitor. This same scene acts both introduction and tutorial, and it’s the best I’ve ever seen of attempts to do this.

This is nicely balanced game, with a good measure of adventure, wrapped around 8 HOPs and a bit more of mini-games. HOPs are standard interactive lists with a twist, some objects are listed as if they were crossword clues. For instance, honey may be listed as: ‘bears love this’.  Some, but not all, of the HOPs are visited twice. Without using hint, you can bring up a silhouette of the item you want. Very helpful. Easy but original puzzles.

There is a good directional hint system, taking you all the way to the correct place, and a diary that is only good at summarising. The objectives list is a little more use. But there is little need, really, because most actions follow logically. More so than in the previous games. So it is not a very hard game, and it is also not very long. The game has a timer and I took 3hrs 30mins, which is pretty quick for me.

BLING!
This is not a CE, but you could be forgiven for thinking it was. There are two collectibles, ravens provide extra hints, and clovers, which are numerous (about 100 I think), and you need 70 of them to open up the unlimited HOP games. These are scenes in which you must find ALL the hidden objects (about twice as many as you get in the game).

They are also both an achievement to collect, along with a dozen or so of other achievements. Many of them are quite hard.

FINAL VERDICT
It may not be as flashy as some of the newer games are, but it is a dramatic, exciting, and in-your-face thriller, that looks darn good and hooks you in from the opening scenes. It still rates a huge 5 from me.