World Riddles: Secrets of the Ages
By: Funny Bear Studio 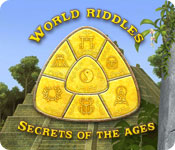 Travel through the ages from the time of the Roman gladiators all the way to the Aztec pyramids. Solve riddles and brain teasers in order to collect Civilization Points that can be used to rebuild civilization. Restore all of the civilizations, collect all seven pieces of the Medallion and become the Bearer of the Secrets of the Ages in this exciting Puzzle game!