Oxenfree is a supernatural thriller about a group of friends who unwittingly open a ghostly rift. Play as Alex, a bright, rebellious teenager who brings her new stepbrother Jonas to an overnight party on an old military island. The night takes a terrifying turn when you unwittingly open a ghostly gate spawned from the island’s cryptic past. How you deal with these events, your peers, and the ominous creatures you’ve unleashed is up to you.

YOU determine every aspect of Alex's story while exploring Edwards Island, uncovering the base's dark past, and changing the course of your friends' lives. 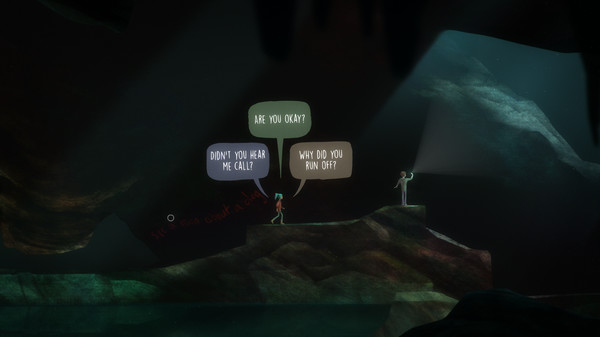 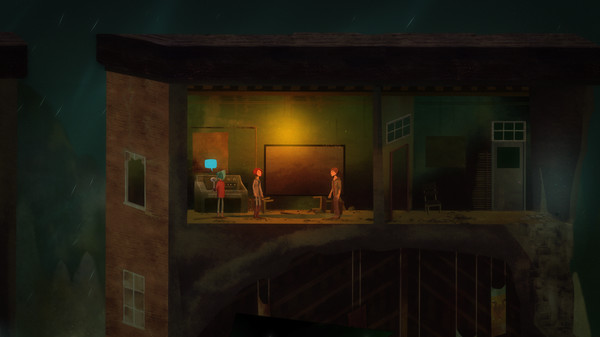 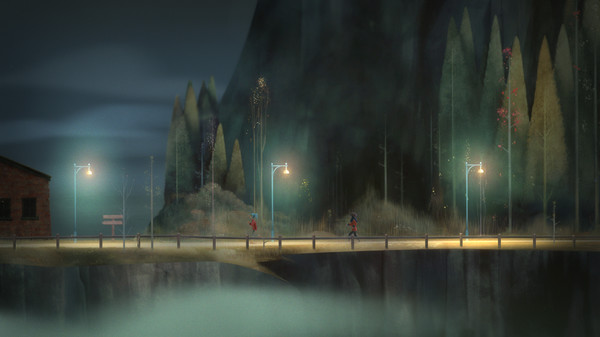 Options are simple enough, with Subtitles (NOT the default), Disable Effects, Windowed or Full-screen, and a range of resolutions from 640x480 up to 1920x1080.  I played the game entirely with my controller with no issues.

Oxenfree is a compelling game for those who love dynamic story-games.  Replayability is added to by having multiple endings and a variety of achievements.  This is not a "I have no idea what to do next," kind of game with impossible puzzles and obtuse logic.  It's all about the journey.

The graphics are not what I'd call compelling, but coupled with the stellar soundtrack, voices, and story, they set the stage for an environmental journey that will keep you riveted throughout.  You can see from the screenshots that the people are not super-detailed, and yet you can tell that the devs put some care into their mannerisms and movements.  For instance, when walking down a steep incline, the characters will lean way back and have the kind of jerky steps one has when they're trying not to lose control of their descent.  Little touches that add some realism and suck you deeper into the world they're created.

Gameplay consists of 2.5D exploring, discovering secrets, and interactions with the people around you.  You will generally have three options to choose from during conversations, and your choices absolutely matter.  There are color-coded thought bubbles that show you which character is speaking, and if a face shows up in that bubble, it means that the character either feels closer to that person, or the opposite, depending on the situation.  Along the way you will discover a compelling story with plenty of "What the HELL?" moments.

The characters themselves have well-defined, believable personalities that are absolutely evocative of the teen years, from their mannerisms right down to their word choices and life decisions.  This is not to say that they're annoyingly "angsty"... just that the devs did a beautiful job capturing their individual personalities.  The voice actors are masterful in their delivery, bringing them all even more to life.

The soundtrack and sound effects range from beautiful to thought-provoking to downright creepy, and all of it atmospheric.

There is one thing that I found semi-annoying about the game, and that is the loading screens.  They're artfully placed in a manner that is reminiscent of the breaks producers add to their shows to allow commercial lead-ins, but I still would have been happier without them.  I also enjoyed the first half of the game more than the second half, with the difference being more interaction with the unknown in the beginning, and more character-development in the latter parts... but that could also be because I was off exploring and looking for secrets instead of progressing the story.

There are 13 achievements to be had, and it will take multiple play-throughs to get them all... The idea of playing again is OK by me, since there are multiple endings!  I managed to get 5 achievements and the second-best ending during my play-through, but I'd like to see where else the story can take me.  There are also five behind-the-scenes documentaries, but when I click to look at them, it just takes me to a loading screen, then back to the page you see upon entering the game.  Not sure what's up with that *shrugs*

If anything in this review sounds enticing to you, then I think that you'll love the game.  Absolutely recommended!