The first of two lunar eclipses visible in the U.S. this year will take place early Saturday morning. NASA explains why the first one is so special. VPC

The first of two lunar eclipses visible in the U.S. this year will take place early Saturday morning.
Skywatchers in the western third of the U.S. will get to see a total eclipse, while folks in the central and eastern U.S. will only see a partial eclipse before the moon sets.
You'll have to look low in the western sky to see the eclipse. As with all lunar eclipses, its safe to look at the moon during the eclipse, unlike during solar eclipses. 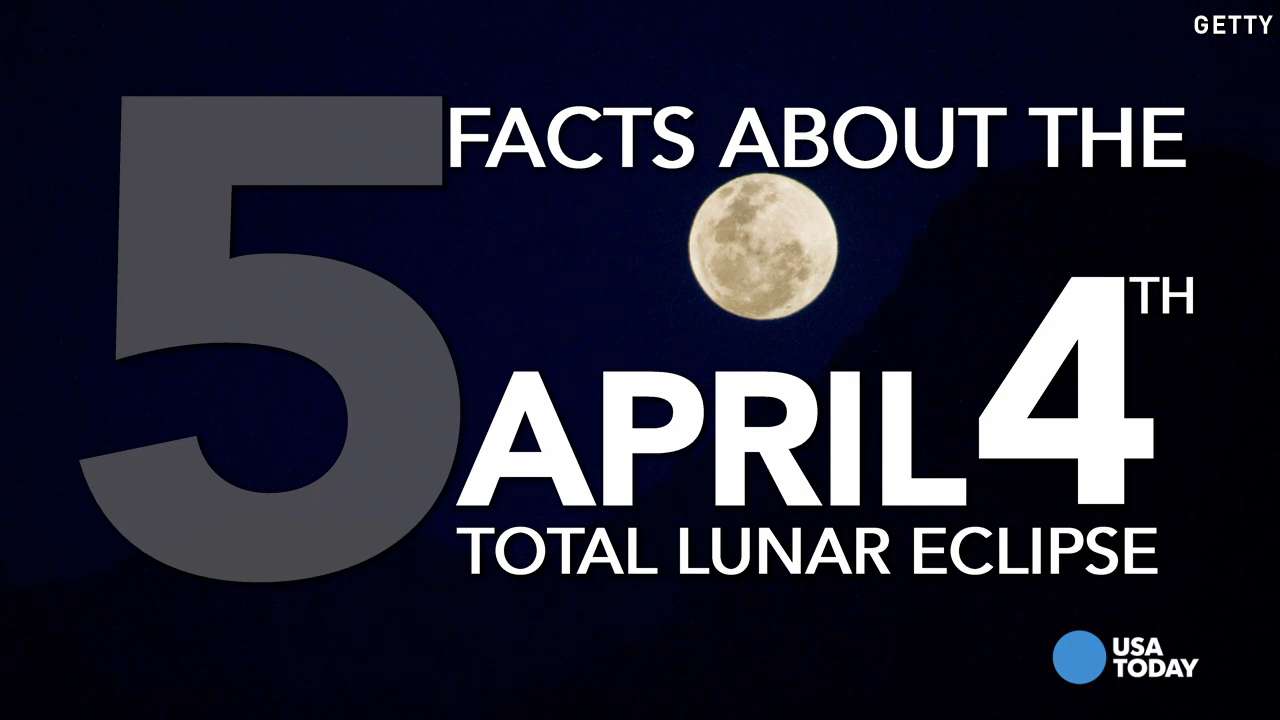 The first lunar eclipse of 2015 will be on April 4th at sunrise. Although it will be third in a lunar tetrad, this eclipse is special. Find out why... VPC
According to NASA, the total phase of the eclipse will only last about five minutes, making it the shortest lunar eclipse of the century. In the West, the total eclipse will begin at 4:58 a.m. Pacific Time and end 5 minutes later.
In the East, the partial eclipse lasts from 6:15 a.m. ET until the moon sets.
YOUR TAKE: Share your eclipse photos with the nation!
According to Slooh.com, this eclipse will be a "Pacific Ocean spectacle" and it will be best seen from eastern Australia, Japan, Hawaii, northeastern Russia and western Alaska.
For a total lunar eclipse to happen, the moon must be full, which means it is directly opposite the sun, with Earth in between, NASA reports. The eclipse happens when the moon moves into the shadow cast by the sun shining on Earth.
A special treat: Most of the moon will glow some shade of intense orange or red, thus the "blood" moon nickname.
"That red light shining onto the moon is sunlight that has skimmed and bent through Earth's atmosphere: that is, from all the sunrises and sunsets that ring the world at any given moment," said Alan MacRobert of Sky and Telescope magazine.
As for viewing conditions, central and southern California should be clear while clouds could ruin the view in the Pacific Northwest, according to AccuWeather. Most of the central U.S. will be okay, but much of the East and South will be socked in with clouds.
The next — and final — lunar eclipse of 2015 will be on Sept. 28.
2014 was a fantastic year for skywatching. Your Take readers were especially excited about the "blood moon." Among the contributions Your Take received was a unusual composite of the eventOct. 8, 2014, over a barn in rural central Texas. "This composite was created by shooting the barn with a long exposure beneath the full moon," says contributor Mike Mezeul II. "Then, I shot the moon using a telephoto lens throughout night." (Photo: Mike Mezeul II, Your Take)

The total lunar eclipse will be visible in the western U.S., while the central and eastern U.S. will only see a partial eclipse. (Photo: Fred Espenak, www.MrEclipse.com)

How weather will impact the viewing of the eclipse. (Photo: AccuWeather)

Here's why the 'blood moon' is so specialWeather | 16 hours ago

Pathos for Pluto: Scientist still stands by his planet

I was awake early enough, but did not know this was occurring. If my laptop wasen't doing
upgrades and cleaning, I would have read this earlier.
The weather outside is rainy, so I am wondering how good the view was.

I like the article about poor Bullied Pluto.
orphaned

luvtoread wrote:I was awake early enough,  but did not know this was occurring.   If my laptop wasen't doing
upgrades and cleaning,   I would have read this earlier.
The weather outside is rainy,   so I am wondering how good the view was.

even though the day was dreary and rainy , it cleared up beautifully ....such a perfect night

but as time passed and the waning moon moved across the sky ... the view was obscured as it sank lower

normally I would go moon chasing ... there is always a spot somewhere where I could catch a glimpse of the eclipse...

thank God for CNN  as can watch the highlights (moonlights??) there

and ... made a wish on the first star seen closest to the full moon ..

would be wonderful to have a magic carpet so as to never miss any heavenly event ever again  ..
orphaned Landing on Titan: Pictures from Huygens Probe on Saturn Moon