Tiger Eye - Part I: Curse of the Riddle Box
by Passionfruit Games 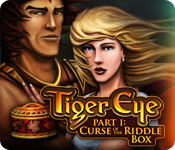 Find mystery, magic, and tantalizing romance in this Hidden Object game! Play as the psychically-gifted Dela Reese and escape China with the love of your life! Dive into danger as Dela purchases an ancient riddle box, containing Hari, a 7-foot tall warrior who has been imprisoned for 2000 years. Help the two of them thwart assassins who seek the power of the box and find a way to return home in Tiger Eye - Part I: Curse of the Riddle Box!

Tiger Eye Part I: Curse of the Riddle Box

There has been a lot of talk about this game, and for good reason. Based on a romance novel by Marjorie Liu, this is a story-driven puzzle game more than anything else. There are diabolically-hidden objects to find, but it's the story and the puzzle elements that are the main thrust of this game.

The main character has been having dreams and powerful premonitions that lead her to China. We find that she is a metal smith who can not only use her psychic powers to help her mold and tease her metal works into the desired pattern and shape, but she can also "speak" to metal. Just by touching a piece of metal she can tell you about where it's been, how old it is and about the people who owned it. When she is introduced to an ancient puzzle box, she is stunned by what she finds inside.

This IS a romance, but even men could get a good chuckle from the story. The characters, though in cartoon form, are perfect for the story. Add in the voice acting - especially that of our hero, Hari - and the story is well-balanced and interesting. There's a good bit of romance and a good bit of humor, as well. I nearly fell of my chair laughing when Hari made his final assumption of why he'd been summoned

The puzzles are varied, many and fun to do. The hidden objects are small, very well concealed and not the slightest bit junk-piley (I just made up a new word! Go me! lol~) Though finding the objects is hard, hints are available, and the rest of the game makes up for the frustration.

I absolutely enjoyed it and am looking forward to the next installment.

Tiger Eye-Part 1: Curse of the Riddle Box was developed by PassionFruit Games . They are a new studio, so they do not have any other titles at present,
but the original team met while working for Her Interactive, a name you will probably recognize. Her Interactive is the team responsible for the Nancy Drew Large File Adventure games. Make no mistake, Curse of the Riddle Box is not an adventure game, but I think the previous association with Her Interactive speaks for the quality of this game. This is one of my favourite games of the year, and it is an Interactive Hidden Object game that has a foundation in some truly excellent puzzles. It is not a traditional Interactive
Hidden Object game, in that it does not allow wandering between scenes, but it clearly has some interactive elements.

The game is based on a series of books by Marjorie M. Liu , a bestselling romance author. I will be honest; I was a little bit put off by the idea of a romance novelist writing the story, but I was drawn into the story right away upon playing the game and had to buy it. Though it is part 1, I was solidly impressed with how self contained the story felt by the end of the game. It is clearly a “To Be Continued…” ending, but I felt satisfied by where the story was ended. Not just that; the game’s story has a good mix of intrigue and humour in addition to the romance aspect. A few of the lines made me laugh
because they could have been picked straight out of any number of romance novels, but only a few. I also came to really enjoy the protagonist of the story. The voice acting is largely fantastic, especially the protagonist, but I was not a fan of the male lead’s voice.

Curse of the Riddle Box was a good length for me; about four or five hours, and I did not feel as though anything was added as filler. The game is not timed, though one of the mini-games is. The artwork in this game is hand drawn and quite to my liking. I really love that, at first glance, nothing seems out of place in most, if not all, of the scenes. My primary interest in the game stemmed from the fact that the objects to find all made sense in the context of the story. This is fairly important to me, as I find it more immersive than the random lists. I think that the objects could have been hidden in a better manner in some instances, though. At times, it feels as though the design team was so caught up in making the scenes look natural that they hit some basic pitfalls- an object hidden in shadows, or recolored, or resized. Hints are plentiful, though, and I was able to find most of the objects without a hint.

Speaking of hints, they are built up by progressing through the game. However, if the player runs out of hints, all that means is that the hint orb takes time to recharge. The player is never without hints, which I think is quite clever. On top of that, the puzzles can all be skipped, but only after receiving the tiered clues available. The skip button only appears after the player has selected each of the clues, which saved me from skipping at least one or two puzzles. A lot of the puzzles are elegant versions of traditional puzzles, but some of them are refreshingly unique. I won’t spoil them by describing them, but I will tell you that I have written to PassionFruit Games to ask them to
please release a full version game of several of the mini-games and puzzles in Tiger Eye. They are apparently too busy with the sequel to do that, but I certainly appreciated getting a prompt response to my question.

Curse of the Riddle Box has a warning on it about mature content, but it is probably nothing even the most sheltered 15 year old hasn’t ever seen. If you are thinking about letting your kids play this and the warning is worrisome, I would strongly recommend that you play it first to make sure it fits within your own guidelines. I say that because I do not feel comfortable giving that kind of advice in a blanket statement, when parenting and maturity levels are such individual things.

Too Long; Did Not Read: I love this game, and plan to buy the sequel straight from PassionFruit Games. The puzzles are amazing, the objects to find relate directly to the story, and the voice acting is pretty solid. The artwork might not appeal to everyone, and there are some flaws with the object placement in a few instances. There is mature content, but nothing that would merit an “R” rating at the movie theater.