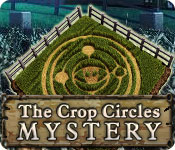 Jane’s wheat cultivation has been tampered with in the midst of a dangerous
thunderstorm. Some think it was just a prank, others think it was the
work of aliens from outer space! Help Jane unravel the perplexing
mystery through a journey of shocking revelations and solve The Crop Circles Mystery! Discover who is responsible in this fun Hidden Object game, and find out what is going on once and for all!

Re: The Crop Circles Mystery (HOG)

It was a daaark and stormy night. You see something moving out in the fields! It's... it's...!! eek

Well, we don't know what it was, actually. It's a mystery, especially when you realize that there are now crop circles out in your field!

Junk-piley hidden object scenes, but at least there's a reason for everything being a mess! Things get progressively better hidden as you progress through the game.

Although there's been a big storm (and the appearance of mysterious crop circles) life goes on, so you have to make money at the Farmer's Market to fix the buildings that were damaged during the storm.

The Farmer's Market portion is pretty cute. Like Gardenscapes, you serve customers, each of whom wants three items.

I don't like that the inventory box closes each time you use something. You frequently need to use more than one thing at a time, just a small nuisance. I also don't like the sound the game makes when you click wrong. Easy enough to fix, I turned down the sound volume and turned up the music

The screen goes dark when you click incorrectly too many times in succession, but only for a couple of seconds.

The music would be awesome in a dark and eerie setting, but this game is neither of those things. It's more like a light-hearted mystery than anything else, which is rather in contrast with the music.

I think that those who like mystery-themed straight HOGs with with few puzzles might enjoy this game.