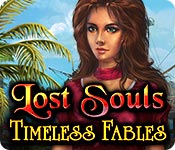 After Bella's brother Stan mysteriously disappeared, she's been haunted by a single dream. Every night she sees her brother vanishing into a glaring portal opened by a strange, ancient book, and every night she wakes up in a cold shiver. She feels certain that it's not a mere coincidence or a trick of the mind, but something to do with a recent find Stan made - an ancient artifact. Set out in search of Stan through the pages of well-known novels and true stories on an exciting adventure - meet spectacular characters, visit eye-catching locations and engage in a twisted plot!

Better Even Than The First*****

FIRST IMPRESSIONS
I was very pleased and surprised to see this game. The original Lost Souls game seems to have been released eons ago, and I’d never hoped to see a sequel. It was lovely and a little different but a tad childlike.

This is a good following game, faithful the feel and structure of the first game, with a bit more maturity in presentation. In story terms it is an independent game, though, so you need not be familiar with “Enchanted Paintings”.

SIGHTS & SOUNDS
The opening cut scenes have graphics that are very good quality, but dark and the art is inconsistent. The images of characters change enough to be distracting. Yet throughout the rest of the demo the graphics and art are wonderful. I love the initial cut scene of the library and the book that is causing all the trouble.

Throughout, the art is detailed, precise and lovely, although it maintains its darker qualities. Even the HOPs are dark – too dark for many I’d guess – in part. Some portion of each scene will be illuminated but not all.

The voices are very good, and the lips do not move in any attempt at lip synch. The music is good, nothing special, though. Plenty of ambient sounds and special effects to keep you in the mood. *grin*

WHAT’S HAPPENING?
Your archaeologist brother finds a rare artifact and disappears. You are having nightmares about him entering a portal, and you think you know where you can find answers. In a strange book at your brother’s (?) library.

Upon attempting to open it, you watch the medallion shatter into 5 books. You enter the first one, The Call Of Cthulhu. Which, you soon discover, is about a tentacled monstrosity terrorising the town of Innsmouth.

This is my favourite game storyline – entering a number of completely different locations via a book (painting, door) - but best of all, when the stories/fables are well known. I have, thanks to other games, seen Cthulhu before, but had no notion it was a well known tale. The others, though, will be recognised by all, I think. Robinson Crusoe, Jack The Ripper, The Three Musketeers, and Titanic.

GAMEPLAY
This is the reason I am so pleased and surprised to see this game keep to the original game structure. It was always a bit unusual. Within each world of the book, we play an interactive HOG, rather than the now more popular HOPA. But this is not all about HOPs.

Each 'book' has several smaller locations for you to travel in, at your choice for the most part, although an announcement will be made if you have completed the tasks in that sub-locale. Inside each of these, you sometimes find a couple of rooms as well, so the structure of the game has a vertical, pyramid-like feel to it.

In these locations, you will need to find certain items, by finding them lying around, getting them as a gift or reward from a character, on completion of a fairly simple puzzle, or as a result of a HOP.

The HOPs are both interactive word lists and picture lists. Each is visited twice, once for each type. They are fairly tricky, because the lighting is restricted to only part of the scene. My advice, when stuck, look up – all the really difficult to see items seem to hang out together up there in the shadows!

Each book is self-contained, but you do have a map which you need to travel to the locations, and which gives you the number of items still needed to be found in there. There is a directional hint and a notebook to help.

And two degrees of difficulty. Fair enough, too, because this is not a game that could ever appeal to the “make it harder” players.

Gradually, you work your way around the locales until you have found and used all the items. You then receive the portion of the medallion for that book and move on.

CE BLING!
Don’t really know a thing about this, as it is all locked up. BUT. The 5th book – Titanic – is locked. Does this mean this world will only be offered in the CE? I fear so, and because there are 5 pieces of the medallion, that means the game will not be completed unless you have the CE. Not just that the story won’t be as satisfying. That the whole darned game will be incomplete! A truly heinous crime by the developers and Big Fish if true.

There are achievements of the performance kind, displayed in a cabinet in your ‘trophy room’. As well, you can buy trophies (souvenirs) with the gold coins you find everywhere, including in HOPs.

COMBINED IMPACT
I dislike the fact that I can’t see a sample of the CE extras, but it’s a beautiful game and I imagine the art will be too. I REALLY dislike the idea that the SE may not be enough to finish the game (for the 2nd time this week!?). However, it is a great game, a bit different, a little light weight, and so I willing to wait for someone to complete the game to decide if I will buy it as SE, CE or not at all as a protest.

I (hope I) recommend this game!