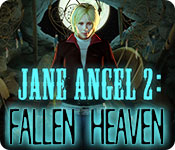 The Mystic Order of the Defenders protects the human race against the descendants of Cain and Lilith, merciless spirits born into our world as demons or vampires. Sir Edward Sinclair, Master of the Order made a fatal error that allowed one mighty ghost, son of Samael, to come into the world...

In this intriguing detective story, Jane Angel’s stepsister, Nancy, is investigating her recent disappearance when she discovers that Jane is the only heir of Edward Sinclair. Now you must help Nancy as she contends with an ancient curse, the ghost world, a vast, sophisticated conspiracy and secret relationships. The mystic disappearance of Jane certainly won’t be easy to solve.

Brief notes of my impressions and what I could remember. Very much an adventure lite rather than a HOG. There are HOPs, a significant amount of them, but more important are the dialogues with people you meet, the quests they send you on, and the strategic decisions you must make.

Your step-sister, Jane, calls on your mobile phone, with a simple message “Save me”. Um, then it gets weird. You are drawn into a world on the other side of the phone somehow. Anyway, you end up shackled to a cannon on a cursed ship in 1536. Your sister speaks to you in her ghost form (I have no idea if any of this conforms to the first game), but you discover she is being held as a witch, and is blamed for the evil demon that is destroying everyone. None of it means much yet.

Your tasks are listed as you go. You have a hint that refills in just a few seconds (thank goodness), a compass that reveals the exits (yeah, I thought that was weird too, but I couldn’t get it to do anything else), and an artifact from your sister whose powers had not been disclosed at the time limit. You also have a book that looks like a journal, but in fact, holds documents, the purpose of which is also not clear. This was on the easier of two difficulty levels.

The HOPs are interesting. You will find a list to match a HO scene, but not all of the items will be visible there. Some, you will find in a connected HO scene off to one side or the other, where there is a HOP word list which also has most of its items in the HO scene it first appears in, but a few will be in the earlier scene. Confused? Yeah, me too.

The one thing that really bugs me, is that the close up windows do not close automatically when you are finished with a zoomed in scene. You must use the ‘x’. Also, what I saw of the game was very dark and images were not always as clear as I’d have liked.

COMBINED IMPACT
Can’t say I was enthusiastic about this at all. As a HOPA it fails. There’s just too much dialogue and oddness about it for the HOPA crowd. For adventurers, well, it would be pretty easy I would think, and not especially intriguing. But you might find it a bit of fun on a lazy day. Still...

I don’t recommend this game!
genkicoll

There are so many GREAT games out there that I want to play that I can't be bothered with ho-hum titles anymore.  Thanks for the info!
_________________
Never be a prisoner of your past.
It was just a lesson, not a life sentence.

I'm with you on that one genki! I've got 50 'genki made me do it' games to play, all of which look way more interesting than this one... and 400 bfg games that are attractive and lightweight fun!