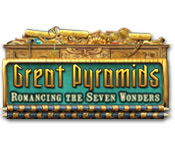 Before the Old Kingdom, in the fourth year of the reign of
King Amenhotep IV, Queen Nefertiti enjoyed unprecedented power, equal
only to the Pharaoh himself. However, in the fourteenth year of the
King’s reign, all record of Queen Nefertiti vanished … until now.
Brianna Hastings has been trapped in an ancient tomb, and only her
sister can save her in Romancing the Seven Wonders Great Pyramid, a
Hidden Object game.

This is an IHOG, with about equal measures of hidden object and wandering/adventure scenes.

The movement is confusing. I got lost a couple of times, simply because in at least one scene, having the right --> arrow cursor at the top of the screen will take you somewhere different than the right --> arrow cursor at the bottom of the screen. Same with going to the left. There's nothing in the background picture that would imply that you'd go to different places, the only difference was the the arrow was slightly smaller on the upper portion of the screen... not noticeably so unless you're paying attention. Going back the way you came is always an arrow pointing down, which makes it even more confusing to me.

For hints, there are none, except on the hidden object scenes, and they take a long time to refill. As for misclicks, three strikes in a row and you're out - minus 10 points on your score. It doesn't matter if you wait between clicks, it doesn't reset based on time.

There was nothing really special about the graphics, I did not find them hard to deal with, nor did I find them fantastic - just so-so. Same with the hidden object scenes, they're OK - neither bad nor great.

Despite the above, I would actually buy this game were it not for the issues with the movement arrows. Simply changing the upper left & right arrows to a diagonal arrow would be enough of a change that I would want to own it. As it stands now, it's a no-buy for me.