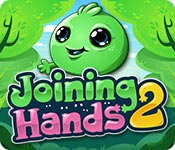 On a starry night, the adorable little Peablins are jolted awake by a blazing fireball, crashing into the Whispering Woods! What could it be? Help these sleepy critters find out in Joining Hands 2, the adorable sequel starring a cast of never-before-seen Peablins! Perfect for players of all ages and skill levels, this game offers hand-holding hints to help kids through tougher spots, while puzzle enthusiasts will enjoy working through more difficult stages as the game progresses. Join together sweet Starblins, gentle Geoblins, elder Grandlins and affectionate Peablins until all the happy critters are lit up, smiling and holding hands! Try to collect all the stars from each level, too!

I have the first one and it's fun but I'm not ashamed to admit I got irrevocably stuck at a certain level and therefore couldn't advance.

I'm wiling to try the 2nd one to see what the differences are. There are clever and logical little time-wasters!
JustTheFacts

As Charming & Upbeat As The Original

This sequel to Joining Hands is a fun slightly more sophisticated version of the first.

Our progress is now followed on a map, there are ten achievements to be won, and the graphics are a little more complex. There are also new peablins to play with, new kinds of connections to make and something very close to a story!

A falling star brings starblins to our home, who have no hands and so we welcome them with a group hug. There are grandlins who are very fragile and cannot move their hands. And geoblins, who can stand on rock but can’t move away from it. All of which adds new ways to enjoy this entertaining little gem.

This game also has added hint – and they’re very useful.

If you’ve not played the original game, here is a brief run down from my previous review.

“The gameplay is straightforward but much harder than it first seems. Peablins are little round blob creatures with varying numbers of arms. It is important for their happiness that all their hands are held by someone else. So, on a grid of hexagons, you must place them all so that their hands join.

So if I have a peablin with 2 arms and 2 others with 1 arm, the 2 armed one will be in the middle, a one armed peabin on either side. It starts from there and gets more complex as each new level is beaten. There are obstacles around which peablins must connect, stars for bonuses, peablin relatives whose own beliefs mean they have different hand holding traditions, etc.

FAMOUS LAST WORDS
Like its predecessor, this is a cute little game, more difficult and certainly more addictive than you’d first suppose. One could lose a few hours to this original and charming game.