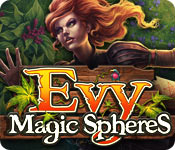 Orphan Evy wakes to find herself in a fairytale kingdom under threat from an evil witch. Monstrous creatures roam the land, from werewolves and evil rabbits to goblins and much, much worse.

With the help of new friends and the magic of her special spheres, Evy must save the land. Match three or more spheres in endlessly-shifting chains to unlock her powers and defeat these vile creatures in Evy: Magic Spheres! 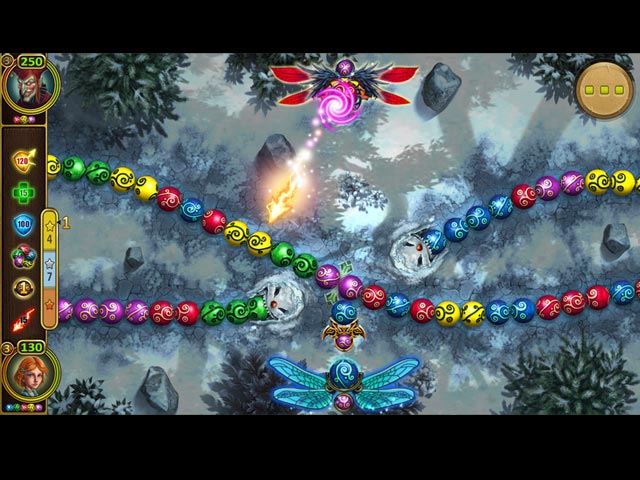 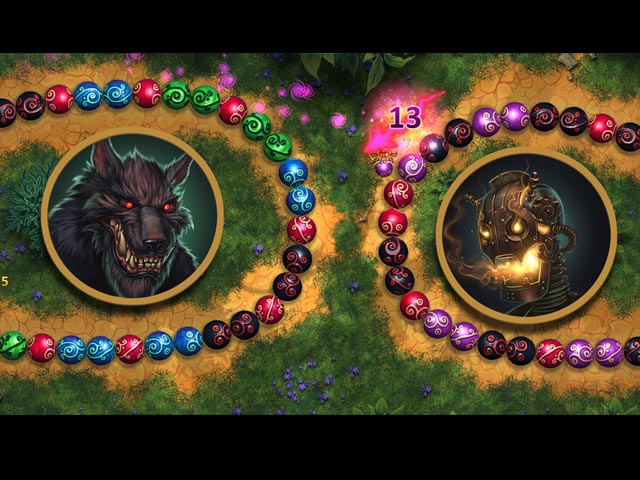 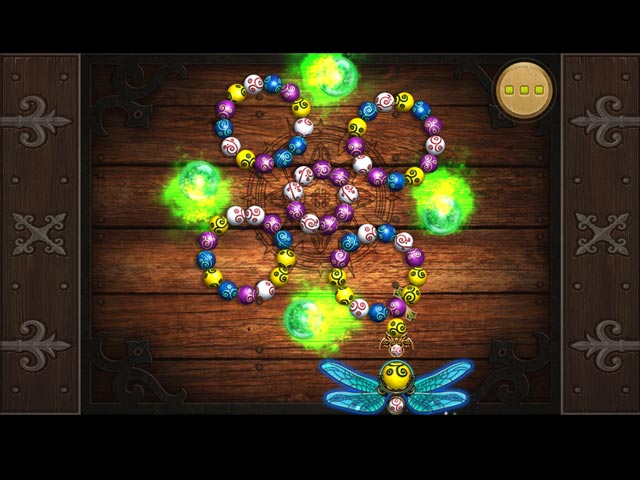 Options are simple, with music and sound on/off, 10 languages to choose from, and resolution.

Marble Duel - or Evy: Magic Spheres, depending on where you bought it - is a battle, strategy-based marble-popper with RPG elements.

For those unfamiliar, marble-poppers are a sub-genre of a match-3 game.  Your goal is still to match 3 (or more) like-items, but instead of swapping, dragging or clicking, you're shooting marbles into the playing field to make your matches.

The goal of each level is to defeat your enemy by making matches.  Each color you match gives you a different outcome:  Red = attack, blue = shield, green = heal, etc.

This is a turn-based game (not real-time), so you have plenty of time to plan your moves.

The premise is simple enough - make matches, defeat the enemy - right?  There is actually a lot more to it than that.  You need to think ahead to be successful.  Causing a chain reaction will earn you extra moves.  Maybe you're fully-healed and don't want to waste the green balls, or maybe you'll be setting up your opponent to make a killer strike against you!

Earn crystals by defeating enemies.  You can earn a bronze, silver or a gold star on each level depending on how many moves it takes you to win the battle (see the gauge at the bottom left of the screen,) and earning gold will of course net you more crystals to spend!

This is where the RPG element comes into play.  The crystals you earn can be spent on six different attributes:  Life (hit points), Attack, Healing, Defense, Attack Power-up and Reflection.  Each enemy has its own buffs for your to contend with, which affects the difficulty.  Luckily, you have the ability to reset and re-distribute your points at the beginning of each encounter by clicking on your picture at the top left of the screen.  You will need to take advantage of this ability if you're going to be successful later in the game!

The game has a storyline to tie everything together, but looking at the main screen is a bit confusing.  What we see is a shapely, confident woman, but what we get in-game is a little girl.  The mystery was solved when I "completed" the game map at level 91... only to find that there is a second map, and Evy is now a young adult!

I've not yet passed level 97, but my understanding is that the game was never "finished".  As far as I'm concerned, the game ended at level 91, and we were given a sneak peek at the second game (which was never developed,) so I feel privileged to see the extra content, rather than ripped off.

There are a few different types of bonus rounds between villains, such as collecting crystals as you fly a plane (and avoid crows) and remove-all-spheres without setting off a magical explosion type of thing.

There are four extra (non-story) levels scattered across the map which will - if you succeed - give you powerful new "paddle" (what you shoot your marbles from).  For instance, the green paddle gives you a bonus +5 healing.  The others... Well, I haven't been able to defeat them yet, so I'm not sure. lol~

There are 19 Steam Achievements.

This is a highly-addictive battle-matching game with a lot of strategy and light RPG elements.  I highly recommend it to anyone who enjoys this type of game... especially if are an achievement-hunter who enjoys a challenge.