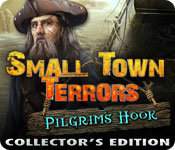 The only person that could bring you back to Pilgrim's Hook has called you out of the blue. Return to your childhood home and save your twin brother from the dark forces that have invaded this coastal village. The few remaining residents of Pilgrim's Hook appear slightly mad and something strange is happening to those that resist the call of the sea. You are the last hope in this decades long struggle between good and evil, sand and surf, and land and sea. Do you have the strength to defeat this evil that lurks beneath the ocean? Find out in Small Town Terrors: Pilgrim's Hook.

Yes, this game really is that good. It’s got something to please everyone.

The story though superficially familiar is far more interesting than that. Just exploring the island, talking to the remaining inhabitants and trying to figure out what’s going on is involving.

The game looks great, bright, clear, misty within context. And I particularly love that though the town was deserted, it was not all old and ugly. Some parts of the town had been attended to up until very recently.

The voiceovers were wonderful. Beautiful well spoken speeches exhibiting appropriate emotions. That’s a rare treat. Music okay and background noises very good at establishing atmosphere. There are times in the game where you are walking about alone and the sense of eerie emptiness is inescapable.

The HOs are not very hard, a little interactive, and of two list types, giving us a little variety. The puzzles are well explained and are fairly easy – I only needed the SG twice. Experienced players will want to play on hard core (level 3), but I suspect even then this may a bit easy. For intermediate me, it was perfect.

Is the CE worth the extra money? I’m glad I bought it. The bonus games were fun, I actually found a wallpaper worth putting on my desktop and there are morphing objects and achievements.

The main game is self-contained and finishes properly, so I don’t think this is a lesser game. It is still well worth the money at SE prices.

If you’ve made it this far, you don't need me to tell you that this game is one of the best. Definitely a Must Have for just about everyone. So I’ll only add that it was the interesting characters, excellent voiceovers and doable puzzles that I liked most. And the creepiest sea monster I’ve ever seen.

BONUS GAME 1
An all new underwater HOPA about the origins of Castour. Interesting, colourful. It had new puzzles, game locations and characters. Felt like a standalone mini-HOPA. It took me about an hour, which it wasn’t all that long but it was fun.

BONUS GAME 2
The second game was a kind of scavenger hunt. You must find 80 whalebones scattered throughout the island. Most were easy enough, and I managed to pick up a couple of Castour’s Creatures along the way, aiming for that one last trophy. But there is no hint. You are expected, as the game told me firmly, to do it on your own.

ARTHUR’S DIARY
Mildly interesting look at a mind descending into madness. Not sure why this is here.

CASTOUR’S CREATURES
The 25 morphing creatures you spotted throughout the game are displayed here alongside the ones you missed. They’re pretty cool.

WALLPAPER, CONCEPT ART
Better drawn and more interesting than usual. In particular I liked seeing how a creature was sketched when it was dormant and when it was awake.

STRATEGY GUIDE
Pretty good. The screenshots were a little blurry. Shows the locations of the Creatures and the Bones at the end.