Secrets of the Dark: Mystery of the Ancestral Estate
by Orneon 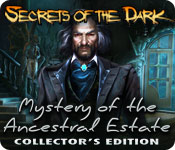 You will have to challenge yourself as a professional who specializes in most tangled cases and defeat the darkness to rescue an innocent soul.   Earlier you’ve already had a chance to investigate strange cases in ancient Thai and Mexico. Now it’s time visit the Mediterranean coast and  reveal the secret of an ancient family estate which was inherited by a young woman who is now begging you for help. Her life hangs in the balance  and her fate is up to your strength and courage.

Re: Secrets of the Dark 3: Mystery of the Ancestral Estate

This game had me interested from the very first. From the classical Greek influence of the game interface, to the voiceover and intro cut scene, everything said top quality.

Having played the demo and reviewed the walkthrough, I can tell you this is an interesting and varied game, with locations as diverse as the ancestral estate, village settings and underwater. There also seems to be a strong mechanical theme running throughout. Very steam punk.

This is not something I readily get into, but I found myself warming to it in this game because it was mixed with other more ‘picturesque’ scenes.

The two HOs that I did were misplaced items, with a heavy degree of interactivity. The best one was a board made up of miniature inventions which, when you have managed to replace the items pictured, and found and replaced a word list, is set in motion, and an item is eventually handed to you at the end. Think early MCF puzzle boards, but neater.

There are also standard list HOs further into the game.

HOs are outnumbered by puzzles, and I’ve already had to skip a couple, but that is normal for me. The Secrets Of The Dark series have original and above average difficulty puzzles. I’m still thinking maybe I should get the CE for the Strategy Guide.

There are no CE style bells and whistles here, no cute sidekicks, collectibles or achievements. What there is, is excellent gameplay in beautiful locations. And a story that has me intrigued.

Members of a brilliant family, two brothers were involved in creating inventions that will revolutionise life for Greece. Such as, free energy.  One took up with a darker power, and eventually his brother had to lock him up in an enchanted gadget of his own invention.

While investigating strange events at the ancestral estate of the brothers, you accidentally let this brother loose. Now it’s up to you to capture and control him again. That’s not going to be easy with harpies already out there protecting him.

Games in this series have an interesting twist - the world is different when viewed in the light or the dark. And the two worlds can affect each other. We are heading into a lunar eclipse in this game, when day becomes night, and this seems to have a bearing on our case.

Just what, I don't yet know, but I'm anxious to find out!