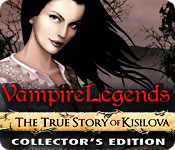 Vampire Legends: The True Story of Kisilova is an incredible adventure based on the true story of the first documented case of vampirism ever! Who or what is killing the townspeople of Kisilova? You and your partner are sent on an improbable journey by the Imperial Court in Vienna. You must investigate a series of strange deaths in a distant town, Kisilova, a far-off region of the Empire on the banks of the Danube River.  The murders occurred under strange circumstances and people are fleeing the town in panic. There is a sense of urgency to solving the mystery, as townspeople are dying and it is up to you to find the culprit and stop the murders. In the end you will discover that things are not as they seem; you must put an end to the tragedy that has struck the unfortunate town of Kisilova. The game is based on the true story of one of the earliest and most well-documented cases of vampire hysteria.

Have you played this? I just finished it, and let me tell you, I don't think I have ever played as short a game, CE or SE. It is unbelievable it was released as a CE, not just due to length, but it has no collectibles or achievements at all.
genkicoll

I've played a couple of games that are barely over an hour long, but luckily only a couple. How long do you do you think it was for you?
_________________
Never be a prisoner of your past.
It was just a lesson, not a life sentence.

The main game was 2 hours, and the bonus was 1. The bonus is not needed at all. The games ends well without it.
A Wizard's Curse came close to that short, but it was an SE, and longer than 2 hours. Not much, but I didn't pay CE price either!

I guess I do remember a while back a game that could be finished during the hour demo.
genkicoll

It's barely acceptable for an SE to be that short unless it's exceptional, and totally unacceptable for a CE! I'd be contacting CS if I were you! >_<
_________________
Never be a prisoner of your past.
It was just a lesson, not a life sentence.

Demo Notes: In order of my noticing them, here’s what we know:

 Great story potential was well presented from the first with the best voice acting I’ve heard, and lip sync! VO can be switched off.

 Graphics were not great on widescreen. But when I toggled the aspect ratio, they were much better.

 No sign of a SG in the extras – it’s integrated and directly underneath the hint button. Seven chapters plus bonus (I think), what I saw of it was good and useful, but my bet is most of us will not need it.

 We have a “M. Dupin” style partner, who communicates with the other characters and us.

 There is a lot of dialogue so far, and plenty of action, but it serves to move the game along rather than slow it down. All the voiceovers are good. Only early scenes are lip synced.

 Interactive HOS were usual junk piles, usual interactions, no hiding in dark corners or super small items. Hint is specific and quick to refill on both easy and hard mode.

 Puzzles were all familiar and easy, but presented in some nicely imaginative ways. Skip quick, but again, unless they get harder later, won’t be needed by most.

 51 mins to complete on easy level. Hard level shows no sparkles. Otherwise, skip and hint slower, basically I could have played on either and not noticed.

My conclusion.
The devs spent their talents on the presentation of the story, and are looking to entertain rather than challenge. This is a very easy relaxing game. Though I don’t think it will be a short one for all that. It appeals to me already – I LIKE these people, and I want to know what’s really happening.

It doesn’t have the usual spectacle and glamour of a collector’s edition, and I think most will prefer to buy the standard. My problem is, I want that extra chapter!

Not since Dying For Daylight has there been such an excellent vampire game, and this is totally different in every way except one – it is designed to entertain.

This game is an account of the true life events surrounding the first official report of vampirism in Eastern Europe. You get to play a court appointed investigator – and there actually was one sent at the time of the incidents. Very weird feeling of realism, and a great way to immerse yourself in the mysteries of the past.

Everything about this game is easy. The PUZZLES are fairly FAMILIAR, and not too difficult even for me. But they are put together in an imaginative fashion.

Likewise, the HO SCENES are not difficult, they are the INTERACTIVE LISTS we see most often. Objects were not difficult to find and hint was quick. The GRAPHICS are a bit GRAINY, but toggling ASPECT RATIO fixed that.

HINT was HELPFUL outside HOS, and SKIP was quick. You get a JOURNAL with NOTES & OBJECTIVES and a INTERACTIVE MAP.

All of which would probably drive our expert fishies nuts.

It is the ATMOSPHERE & STORY that set this game apart. A great deal of effort has gone into presenting a tale of historic significance in a way that keeps you wanting more.

You have a M. Dupin (Dark Tales) – like PARTNER, who communicates with both us and the characters in the BEST VOICE ACTING I’ve ever heard.

I had a thoroughly delightful time with this one. A unique gaming experience.

I must admit that part of my enjoyment came after the game, when I had access to the BONUS CONTENT of the CE, in which there are interviews with experts and photos of modern Kisilova. There are in town still members of the family whose ancestor was accused of being a vampire. Wow, try to live that one down!

But I don’t think this game loses any of its appeal by being a SE. It is first class game, and I hope we see more like it.