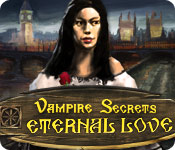 Embark on a mysterious journey taking you from London to the heart of Transylvania and investigate a series of nocturnal kidnappings bringing unrest to Eastern Europe. It's up to you to face these troubled times in search of your younger sister, Maria. Your investigation will lead you to Bran Castle, a place steeped in the myth of Count Dracula. Immerse yourself in an ancient vampire society in Vampire Secrets: Eternal Love!

BASED ON COMPLETED DEMO

Actually the graphics quality is perfectly fine, I have reviewed two big name games (one a new release) just this week with worse graphics, and this game gives you options for adjusting graphics to suit yourself. I managed to get a mix I could live with. The problem is the style is seriously dated photo realism. Also, the artists can’t draw faces to save their lives.

Having said that, this is an extremely odd little game. And once again, not a HOPA but a HO game.

Let’s walk it through.

I really liked the opening cutscenes, which told the story of Vlad Tepes, the real life historical figure some allege to have been a vampire. Concept art-style sketching is done for this and I think it looks great. The story is set 500 years later, when presumably Vlad comes back looking for his long dead wife.

The main menu offers three slider options to adjust the graphics: quality, brightness and sharpness. I found lowering the sharpness eased the brittle quality a bit. As I said, photo realism. In bright, light, pleasant rooms. Not exactly candy for the eyes, but not sand paper either.

Now the game play, which is what kept me going to the end of the demo. Trying to work it out.

“We” appear to be a young peasant girl (with an appalling voiceover) getting ready for work at the castle. The room we find ourselves in is the HOs. We have a list of named items, followed immediately by a list of silhouettes, all for the same scene. As well, items in blue trigger mini-games within the scene.

I played a ‘hit the hammer at the right moment’ one, identify shoes by shape, restock the shelves with books, and a HOs within the first. And one of those great mirror pieces ones where the image changes when you move the piece. They did a very good job at that.

We have some extra resources in this one. We can zoom in, pan around, and see a mini-map to show us where we are in the scene.

The HOs are tricky, because they are very well hidden, nothing to do with the graphics. The puzzles are easy.
As soon as this scene is complete, we are magically transported to the next, where the same procedure is followed. There is a hint that the gameplay may increase in difficulty as we play.

The screenshots flashed at the end of the demo (which took me 35 mins for two completed locations) suggest the colour and odd gameplay continue throughout the game.

Giving this game two stars is generous, I certainly can’t recommend it, but I hope the developers will keep trying. They have made something different here, and in a world swamped with cookie cutter HOPAs, that’s worth something.